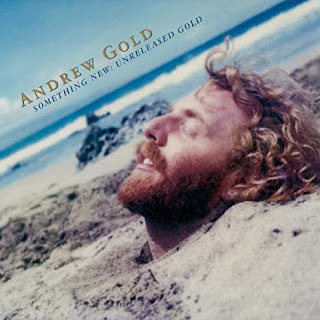 Record Store Day was scheduled for April 18th, but due to the coronavirus pandemic it was pushed back to June 20th. Now it looks like it will take place on three Saturdays, one in August, one in September, and one in October (the list of which records will be released on which days is due out on June 1st). As is the case every year, there are several special releases coming out, and my wish list grows every time I look at the website (and we all have time to peruse that list). One record that is coming out for Record Store Day is Andrew Gold’s Something New: Unreleased Gold, an album of previously unreleased tracks from the singer and songwriter responsible for the hits “Lonely Boy” and “Thank You For Being A Friend,” the latter later covered and used as the theme for The Golden Girls. You’ll have to wait for the vinyl, but the CD version is available now, and that includes four extra tracks. Most of the tracks on this album are solo demos, focusing on Andrew Gold’s vocals, but there are a few band tracks as well. This music was recorded in 1973, two years before the release of his first album, and as good as this material is, most of these songs did not find their way onto his solo albums.

Something New: Unreleased Gold opens with its title track, “Something New,” a cheerful pop tune. These are the song’s opening lines: “Every day I wake to find I’m happy/It’s showing up in everything I do/I never thought I’d feel your love around me/I’m telling you it’s sure as something new.” I can certainly use a happy song like this one, and I imagine I’m not alone in that. This is one of the tracks to include the whole band, which is made up of Peter Bernstein on bass, Kenny Edwards on guitar and backing vocals, and Gene Garfin on drums and backing vocals. “And I’m glad, I’m so glad, that you are mine.” That’s followed by a solo demo recording of “Come Down To Me,” a beautiful song, with Andrew Gold on piano. “Now you’re moving away/Like the boat from the bay/Rolling out to the sea/But oh my friend, don’t forget me/In the morning, I rise to meet you/In the evening, you drift away.” Andrew Gold switches to acoustic guitar for the solo demo recording of “What You Do Is What You See,” one of my personal favorites. There is a sweet innocence to this song. “So let’s start looking forward/It’s upward and onward for you and for me/What you do is what you see.” This is a song I need right now, and Andrew’s vocals sound fantastic here. I love these demo recordings. They are not as raw as some demos you hear.

Andrew Gold returns to keys on the solo demo recording of “The World Tomorrow Brings,” a song about the desire for a return to an earlier time, with lines like “And everywhere it’s plain to see nostalgia is all the rage/A hundred million people shouting, ‘Hide the current age’” and “Forget the 1950s/It’s now we should revive.” Those are interesting lines, particularly in light of the fact that this song was recorded in 1973, the year of American Graffiti (and a couple of years after the stage debut of Grease, and the year before the premiere of Happy Days). “I want to hear the people sing/I want to find people laughing, people laughing/Because they’re living in the world tomorrow brings.” Yes, me too. Then Andrew Gold switches back to acoustic guitar for “You Are Somewhere Within Me.” In this one he sings, “You are unsatisfied/You feel unsure.” Well, those words could apply to most of us these days. Then “Sometimes When A Man’s On His Own” is a solo performance on piano. This is another strong track, featuring a passionate performance, particularly on vocals. “If you try to reach for me, I will try to reach for you.” Ah, that is sadly not the case these days. If you try to reach for me, I will aim pepper spray at you. Nothing personal, mind you. Then we get a full band version of “Prisoner,” a song with some good harmonies.

On the solo demo of “Ten Years Behind Me,” Andrew Gold plays acoustic guitar and provides his own backing vocals. This is a song that would end up on his first LP, a self-titled album that was released in 1975. That version features piano, and so is quite a bit different. Interestingly, a demo version of this song was included as a bonus track on a CD re-issue of that album, that one on guitar, but it is not the same recording that is included here. That one has him counting off at the beginning, but then is an instrumental track. The version included here is pretty and moving, and I actually prefer it to the official LP version. That’s followed by “Timothy Corey,” the piano having a happy, bright sound right from the start. “You believed in God, but thought you were the only son” is a great line. Then he switches to acoustic guitar on “Almost Love.”  “Yes, it’s hard to find a love that’s strong in these unfaithful times/Almost love is the best that I can find/And it’s almost love that pulls us together/It’s almost love that draws us apart.” Maybe almost love is the best many people can hope for, which is depressing, but this song has something of a sweet sound.

“Penny Arcade” is another excellent track, this one performed on piano. Check out these lines: “My father was old, and he kept the place clean/My mother fed coin to the movie machines/And my sister’s religion were the songs that were played/Inside all the bells in the penny arcade.” Seriously, how was this not released before? “Sit yourself down and hear my song/I’ve far to go, so I won’t stay long/To make you feel happy is my only trade/I’ve lived my whole life in a penny arcade.” The vinyl release ends with a solo demo recording of “Don’t Bring Me Down,” a lively number performed on piano. “Well, you’d better stop this screwing around/Stop and listen because it’s bringing me down.”

The CD release contains four more tracks, beginning with a full-band rendition of “Resting In Your Love,” a song that would become “Resting In Your Arms” when it was included on his self-titled debut album. This one has a happy vibe about it, and is kind of catchy. Yeah, it might be just a bit cheesy, but who cares? “It won’t be right ‘til I’m at home with you.” We can relate to that, can’t we? But, yeah, changing the word “Love” to “Arms” was probably the right choice. That’s followed by a solo demo of “Joseph,” performed on piano. We then get an alternative band version of “A Note From You,” a song that was included on his debut full-length album. “Every day the mailman comes and he gives me notes to read/Like notices which say, ‘Dear sir, your payment’s not received’/I’m sick and tired of having the kind of mail I do/All I need is my monthly check and a note from you.” Yes, this is a fun one. The CD then concludes with a solo demo version of “To Be Someone,” performed on piano and featuring an excellent vocal performance. A different version of this song was included as a bonus track on the CD re-issue of that debut album. That one features the full band. I prefer this solo version. “Did you wonder where I have been/And have you wanted to see me again/You’re the one that I really need to be someone.” This is another of the disc’s highlights.

CD Track List
Something New: Unreleased Gold was released on CD on April 24, 2020. It is scheduled to be released on vinyl during one of the Record Store Day drop days.
Posted by Michael Doherty at 1:59 PM