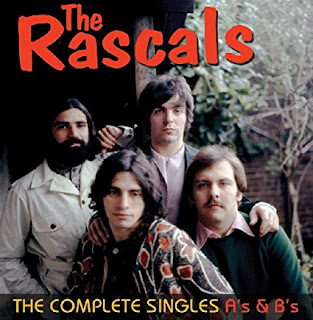 When I was a teenager, I felt I’d been born at the wrong time, that I would have thrived in the late sixties, when the music was great, and politics were exciting, and people seemed to come together to battle the giant monsters. People were involved, and change seemed not only possible but inevitable. Now here we are, in a time when there are battles to be fought, monsters to be defeated, and it’s just totally frightening and depressing. We are living in strange and scary times, with an unstable menace occupying the White House, and I’m not sure what change is possible. So maybe I wouldn’t have enjoyed everything about the 1960s after all. But I still love the music.

Today I turned to The Rascals for relief from the present. The Complete Singles A’s & B’s, the new two-disc compilation, includes nearly fifty tracks of good 1960s and early 1970s rock and roll, from the band’s early days as The Young Rascals, right up to their final single, “Jungle Walk.” All the hits that you know and love are here, including “Good Lovin’,” “Groovin’,” “How Can I Be Sure,” “A Beautiful Morning” and “People Got To Be Free.” And, as the compilation’s title promises, all those lesser known B sides are also included – songs you may not have heard, but will likely enjoy. This two-disc set includes liner notes by Ed Osborne, based on interviews with band members.

The songs are presented in order of their release dates, and so the first disc kicks off with “I Ain’t Gonna Eat Out My Heart Anymore,” the band’s first single, which was recorded in November of 1965. It was a minor hit and was also included on The Young Rascals’ self-titled album. It’s a tune about being in love with a girl who isn’t faithful, and telling her she’s got to make a decision. I actually prefer the single’s flip side, a cover of “Slow Down,” which is a fun rock and roll number written by Larry Williams (and also covered by The Beatles). The band’s second single turned out to be one of its biggest hits, “Good Lovin’.” The song had been recorded by a couple of artists before The Young Rascals, but it is the Rascals’ version that everyone knows. And for good reason. This is an excellent, energetic rendition. It’s been used in several films and television shows over the years. The two that stand out for me are The Big Chill (one of my favorite films) and a particularly good episode of Moonlighting. The scene in The Big Chill makes good use of that pause in the song.

The band’s third single, “You Better Run,” is the first written by band members Felix Cavaliere and Eddie Brigati. It obviously wasn’t as big a hit as “Good Lovin’,” but it did reach #20 on the Billboard chart, and it’s a cool song – one of my favorites, actually. “Whatcha trying to do to my soul?/Everything I had was yours/And now I’m closing all the doors/Whatcha trying to do to my soul/You better run, you better hide.” “Come On Up,” written by Felix Cavaliere, is a fun song to get you dancing. It’s not all that interesting, but it doesn’t need to be.

“I’ve Been Lonely Too Long” always sounded to me like a song that might have originally been recorded by a Motown vocal group. It has that sort of feel. But no, it was written by Cavaliere and Brigati and it reached #16 on the Billboard chart. It was followed by the band’s second number one hit, “Groovin’,” a relaxed and kind of sweet tune. I had this song on a compilation cassette during my teen years. I think it was titled Summer Of Love. I got it in 1987. “Groovin’” was also written by Felix Cavaliere and Eddie Brigati. This compilation also includes the Spanish and Italian versions of this song, which were released together as a single but not included on the LP. I had never heard these tracks before, and they are certainly among this release’s treats.

“How Can I Be Sure” was another big hit for the band, reaching #4 on the Billboard chart. This one has quite a different feel from their earlier releases, with an interesting European sound, and is another of my personal favorites. A few years later, Dusty Springfield had a minor hit with her version of this song. The flip side, “I’m So Happy Now,” is also really good. I particularly dig that guitar part. This one was written by Gene Cornish, who also sings lead. It has a very positive vibe. “It’s A Beautiful Morning” also has a positive vibe. I think I had this one on a 1960s compilation cassette too, but I can’t recall the name of that one. It might seem a bit cheesy, but I still like this song. Oh, I remember now, the compilation was titled Mellow Sixties. “People Got To Be Free” is another of the band’s number one hits, and this song holds up really well. I love this song, and it seems as relevant today as the day it was released in 1968. “No two ways about it, people have to be free.” The band’s following single, “Ray Of Hope,” is also one that carries a positive message. And again, these lyrics are needed today: “I know a lot of people who think like me/That this world could be a place that's filled with harmony/First there's a lot of things we've got to rearrange/First put an end to hate and lies/So peace can come and truth shall reign/As long as there is a ray of hope.”

The next single, “Heaven,” actually includes a little nod to “Ray Of Hope” in the line, “There just don’t seem to be a ray of hope around.” Both songs were included on the LP Freedom Suite, “Ray Of Hope” being the last song on side 1, “Heaven” the last song on side 2. “Heaven” is another of the band’s strong songs, though it only reached #39 on the Billboard chart. It was written by Felix Cavaliere, as was its flip side, “Baby I’m Blue.” “See” is kind of a strange song, and that repeated guitar line reminds me a bit of The Monkees’ “Last Train To Clarksville.” “Secret mirror photographs/Shining in your eyes/I'm married to the universe/My brother is the sky.” It goes in some interesting directions, and I actually really like this one. Its flip side, “Away Away,” was written by Gene Cornish, and has a good, kind of heavy groove, and some cool stuff on keys. Then “Carry Me Back” begins with some delightful work on keys, and is another really good song.

With “Glory Glory,” The Rascals dip into gospel. This song reached only #58 on the Billboard chart, but it’s a fun and positive tune, written by Felix Cavaliere, and features some wonderful backing vocals. Its flip side, “You Don’t Know,” was written by Gene Cornish and has something of a country rock vibe. The next single, “Right On,” is a somewhat funky tune that I like, but it failed to make it to the Billboard Hot 100. “Almost Home,” the single’s flip side, is kind of beautiful – a smooth, moving, mellow, soulful number. All four of these songs were included on Search And Nearness, the band’s final LP to include all four original band members.

Eddie Brigati and Gene Cornish left the band, and The Rascals switched labels, from Atlantic to Columbia. Buzz Feiten (from The Paul Butterfield Blues Band) and Robert Popwell joined The Rascals for the next album, Peaceful World. “Love Me,” that album’s first single, just barely made it into the Billboard Hot 100, peaking at #95. And none of the group’s remaining singles got that far. That doesn’t mean they’re bad songs, of course. “Love Letter,” which was the B-side to “Lucky Day,” is particularly fun, and I love both the horns and the keys. This one becomes a good jam toward the end. By the way, this disc has twenty-one tracks rather than twenty-two, because “Saga Of New York” was used as the flip side to both “Brother Tree” and “Jungle Walk.”

Disc One
Disc Two
The Complete Singles A’s & B’s was released on March 3, 2017 through Real Gone Music.
Posted by Michael Doherty at 4:21 PM