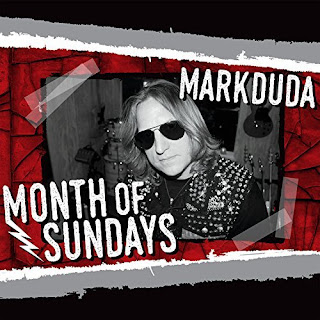 I wasn’t all that familiar with Mark Duda’s work before I popped in his new CD, Month Of Sundays. I hadn’t heard his bands The Handful or Mad City Rockers, because I don’t listen to a whole lot of hard rock. And so I wasn’t sure what to expect. But it did not take long before I was drawn in, and then interested, and then nearly gleeful at the music I heard, almost giddy. Seriously, this CD came as a wonderful surprise. It’s rock, absolutely, no question. But it’s rock with some style (but not bullshit) and with some care taken in crafting its lyrics. And it reminded me of some of the best rock of the 1970s. I am glad to know albums like this one are still being made. All six songs on this EP were written or co-written by Mark Duda. He is joined by Handful  band mate Jimi K. Bones on guitar, percussion and backing vocals; Thommy Price (from Joan Jett And The Blackhearts, Scandal) on drums; and Kenny Aaronson (from Stories) on bass. There are also a few guest musicians on certain tracks.

Mark Duda kicks off Month Of Sundays with its title track, which first sounds fairly straightforward. But then the chorus reminds me of some classic Meat Loaf tunes, the vocals carrying that kind of strength and confidence and exuberance, and that’s when I start getting really interested. And by the end of this track, I am totally on board. “You don’t want to hold me down/You just want your hooks in me.” I’m hooked. That’s followed by “Murder On Delancey,” which has a good, straightforward rock sound, and some surprising lyrics. “I am crying/I cannot save her/I am screaming/Bloody murder.” Joining Mark Duda on this track are Cheetah Chrome (from The Dead Boys) on guitar and Bobby Rondinelli (from The Handful) on drums.

Probably my favorite track on this CD is “Standoff Love,” which opens like some classic rock ‘n’ roll tune, complete with saxophone. That’s Arno Hecht on sax, whom you likely know as a member of The Uptown Horns, a group that has toured with The Rolling Stones. And he’s fantastic on this track. Again Mark Duda reminds me a bit of Meat Loaf here, with that obvious love of pure rock and roll in his blood, mixed with unusual lyrical content, creating a captivating combination that is also a whole lot of fun. “Cursing my name under your last breath/Wondering how in the hell you fell in my trap/It’s a death wish, honey, hanging around too long.” Those are the song’s opening lines. And check out these lyrics: “I’m just a wanted man/I know I wasn’t there/Please see my point of view/It’s not that I didn’t care.” I love this song. It was written by Jimi K. Bones and Mark Duda.

Then “Worse For Wear” is a slower rock tune. “I couldn’t help myself/And you couldn’t care less.” I also like these lines: “Lie to me, lie to me/Lie to me, lie to me/Take all the worst out of what you think you see/And hold it over my head.” That’s followed by “Connection,” which has a great 1970s rock feel, complete with cowbell. This song takes me right back to my youth, but again, the lyrics are good. “She’s got friends on the jury, friends on the jury/Whoa, she used to be my mainstay/Hey, hey, hey, hey/Well, she used to be my connection.” This track also features some fun electric guitar work. The EP then concludes with “Subway Song,” which opens with a decidedly lo-fi feel, almost like a folk song performed in the subway station. After thirty seconds or so it then kicks in and becomes a fun rock tune. “I saw you on the subway/And I decided I would take it at six o’clock nearly every day now/Baby, when are we going to make it?” I love the humor of this.

CD Track List
Month Of Sundays is scheduled to be released on April 14, 2017 through True Rock.
Posted by Michael Doherty at 7:33 PM