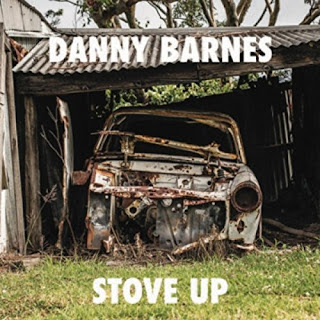 For those of us in need of respite from the criminal buffoonery of our so-called leaders, Danny Barnes offers Stove Up, a new CD full of music from a better time and place. Is there a brighter, happier sound than a banjo? I don’t know. On Stove Up, this talented banjo player (whom you probably know from Bad Livers, if not from his solo career) pays tribute to another great banjo player, Don Stover. Here he delivers renditions of several songs from Stover’s 1972 album Things In Life, as well as some other covers and also some original material. Most of the tracks on this CD are bluegrass instrumentals, but there are a few tracks with vocals. Joining Danny Barnes on this release are Jason Carter on fiddle, Mike Bub on bass, Chris Henry on mandolin and national tenor guitar, and Nick Forster on guitar and mandolin. So maybe that better place still exists, in a parallel universe, and this CD is your ticket to pass over.

Danny Barnes opens the album with an original composition titled “Isotope 709,” a bright, fun instrumental number. And right away the darkness begins to lift, like the government is being gently swept aside by the rising notes of the music. The place of this music is not a place for lies and hatred; those just can’t exist here. You’ll know what I mean when you pop in this disc. This tune has a delightful ending, and is followed by “Black Diamond,” an instrumental written by Don Stover and included on Things In Life. This is one of my favorite tracks. It makes me feel like the world is a good and happy place, and maybe it is. It certainly is while this song is playing. There is something friendly and warm about this track, something inviting and disarming and fun.

“Factory Girl” is the first of the album’s tracks to feature Danny Barnes’ vocals. It’s a song written by Mick Jagger and Keith Richards, and originally included on The Rolling Stones’ Beggars Banquet album. It totally works as a bluegrass song, with its playful lyrics. “Waiting for a girl and her knees are much too fat/Waiting for a girl, she wears scarves instead of hats.” That’s followed by another of my favorites, an instrumental rendition of “John Hardy.” I’ve heard a whole lot of versions of this song over the years, and this one with just banjo and fiddle stands up with the best of them. Danny Barnes also presents “Bill Cheatum” as a banjo and fiddle duet.

Danny Barnes’ rendition of “Rockwood Deer Chase” begins with a bit of noodling, like warming up for the wild number that soon emerges. This instrumental was written by Don Stover, and was included on Things In Life. And oh man, Danny Barnes’ work on banjo is fantastic. Can we somehow broadcast this track to the entire nation? I feel like it could very well be the antidote to what ails the country. That’s followed by a fun version of Eddie Shelton’s “Blue Ridge Express.” There is such a joy to the playing, and it transfers so easily to the listener. And for that, I am thankful. We all could use a bit of help these days in raising our spirits. “Steel Guitar Rag” will work to that end too, with its cool, relaxed back porch vibe. Halfway through, it goes in a different direction. This is yet another of my favorites.

“Charlie” is the second of the album’s tracks to feature Danny Barnes’ vocals. This playful song about a man of deficient character was written by Danny Barnes. “He wound up sitting in a federal can/Out in ten years and do it all again/Charlie was a no-good man/He woke up doing the worst that he can/Charlie was a no-good man.” The album’s final vocal track is “Get It While You Can,” also written by Danny Barnes, and it is another of the CD’s highlights. Interestingly, on this tune Danny plays 12-string guitar. I love the cool vocal line of this song. “I got a pickup truck on blocks/And my landlord changed the lock/I got my hat in hand/Standing in the welfare line/You best get it while you can.” This tune is great fun, with some excellent playing.

CD Track List
Stove Up was released on March 3, 2017 on Wendell Records. It was made available as a download on November 30, 2016.
Posted by Michael Doherty at 3:23 PM