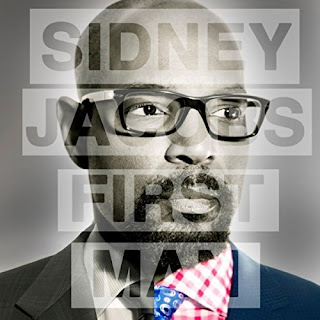 The album opens with the shortest of instrumental tracks. Titled “First,” it’s only twelve seconds long, and is some pretty guitar work by Greg Poree. That leads to the title track, “First Man,” which begins with guitar and a bit of vocal play. When it kicks in, this song reminds me of The Temptations. It has a cool groove, with some nice work on percussion, and I dig the Sidney’s vocal play toward the end. This is one of my favorite tracks. Sidney Jacobs gets more into jazz territory with “Last Night,” a song featuring the horn section and some delightful scat. “And baby, I’m with you all the way/Yes, I am.” I love that Sidney doesn’t hold back vocally, but in a wonderfully unselfconscious way lets it out. And what a voice! This is another of the disc’s highlights.

“Undercurrent” is an incredibly short drum solo that leads right into a cover of “My Favorite Things.” I’m not sure why it’s offered as a separate track, as it really feels like the beginning of the song. I’m not a fan of “My Favorite Things,” mostly because I think the lyrics are terrible. But I enjoy the music of this version, as well as Sidney’s vocal play when not delivering the lines – basically the scat. Justin Thomas adds some nice work on vibes. And I like the end, where Sidney’s strong voice is particularly impressive. And listen to how smooth he can be on “Fly,” a song that features a wonderful saxophone part by Josh Johnson during the instrumental section that begins like three and a half minutes in. The sax is pretty and uplifting over that good groove.

The lines that I really like from “Say What You Will” are “You’ve got so much to say/But more than that you’ve got so much to learn.” Words we should all take to heart at various points, eh? I also really like Michael Jarvey’s work on piano. Sidney follows that with a cover of Kendrick Lamar’s “You Ain’t Gotta Lie.” This version is better than the original. For one thing, Sidney pronounces “ask” correctly. It sounds like Kendrick says “ax” instead, which is obnoxious. But this rendition also has a cooler vibe. That’s followed by another cover, Sacha Distel’s “The Good Life.” I love the late-night feel of the playing on this track, by Zephyr Avalon on bass and Josh Nelson on piano. Their playing is kind of quiet and relaxed, but still very cool and confident.  And Sidney’s voice rises above them at moments. This track is another of the disc’s highlights, and features some wonderful work on bass.

“Long Walk” surprisingly opens with strings – Francesco Canas on violin and Michael Jarvey on viola. It’s a pretty opening section, and it’s nearly a full minute before Sidney’s vocals comes in. “Even when you tell me that you won’t/I believe you will/That’s my hope still/Even when this dream turns into dust/I just can’t give up/What else can I do/Long walk.” The CD then ends with a touching and tender cover of James Taylor’s “Secret O’ Life.” Rather than guitar, it is piano that accompanies Sidney’s voice on this rendition.

CD Track List
First Man was released on January 23, 2017 on Babychubs Records.
Posted by Michael Doherty at 2:24 AM