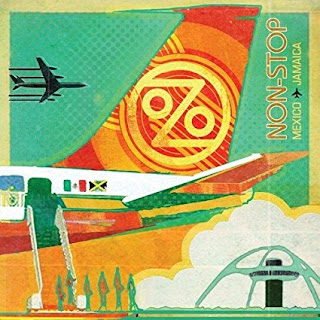 I moved to Los Angeles in the late 1990s, and Ozomatli was one of the first L.A. bands that people turned me on to. It seemed that everyone I met who knew music was a fan of this band. And it didn’t take long to find out why. Their music has a joyful energy, with lots of positive vibes to get you dancing, but the band also certainly has something to say. Later, I used to sometimes watch the Gabriel Iglesias show just to catch the Ozomatli’s numbers, but of course there was never enough of the band on that show. Anyway, they’re putting out a new CD, Non-Stop: Mexico To Jamaica, which is an album of covers of Mexican songs, done with a reggae feel. The group is joined by several guests, including Herb Alpert and Gaby Moreno. As you expect of any release from this band, the disc contains plenty of good, positive vibes. This music seems potent enough to defeat the racist, fascist Trump regime, so if you live in D.C., turn this one up!

Ozomatli kicks off the CD with “Eres,” a song by Café Tacuba, and right away that reggae beat gets me dancing. The plan is to drink and dance until The Horror In The White House is over. Joining the band on this track is Sabrina Luna on cello, an instrument I am always happy to hear. They follow that with a rendition of Selena’s “Como La Flor,” this track featuring an easy-going groove mixing reggae and Latin elements. Apart from watching the movie Selena, I never really got into her, but this song makes me want to check out more of her material. There are more good grooves on their version of Maná’s “Oye Mi Amor,” a song that was released as a single back in 1992.

The band delivers a really cool, interesting rendition of “Besame Mucho,” a song written and originally recorded by Consuelo Velazquez. I think the first version I heard was by The Beatles. In the 1980s I purchased a cassette by the Silver Beatles, titled Volume 1, which contained early stuff, including their version of this song. This rendition by Ozomatli is obviously quite a bit different, and includes a rap. What’s also exciting about this rendition is that Herb Alpert joins them on trumpet. That’s followed by one of my favorite tracks, a seriously fun rendition of “Noa Noa,” a song by Juan Gabriel (one of the many singers and musicians we lost in 2016). Juanes joins the band on guitar on this track. This song, particularly the chorus, has such a happy feel. I love this tune. Now I need to see the movie El Noa Noa. I just added the DVD to my wish list.

Ozomatli gives us a unique take on “La Bamba.” Of course, I’m mostly familiar with the Ritchie Valens rendition, and it seems most people who have covered it since have taken his lead, have used his version for inspiration (with some exceptions, of course). This version is quite a departure, and is fun to dance to. It features Kyle McDonald from Slightly Stoopid on lead vocals. That’s followed by another of my personal favorites, “Solamente Una Vez,” written by Agustin Lara. This one pulled me in immediately with its slower, prettier vibe. This one too features a guest vocalist, Gaby Moreno. I love her work here. Also joining the band on this track is Emile Porée on guitar.

The band also delivers a totally enjoyable rendition of “De Paisano A Paisano,” a song by Los Tigres Del Norte. This is another track that reminds me the world is a good place. It’s followed by a very good rendition of “Evil Ways.” The album concludes with “Come And Get Your Love,” which was a hit by the band Redbone in 1974. (Though the band is from California, they have Mexican heritage.) Ozomatli’s version has a fun, kind of sweet groove.

CD Track List
Non-Stop: Mexico To Jamaica is scheduled to be released on May 5, 2017 on Cleopatra Records.
Posted by Michael Doherty at 7:45 PM