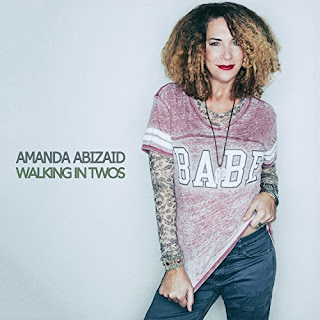 At a time when I think it should be clear to everyone just how important education is, Amanda Abizaid is donating funds generated from sales of her new EP, Walking In Twos, to help buy school supplies for the Aeta children of the Philippines. She was inspired by her experiences in the Philippines last year, when she visited villages and sang to young students at their schools. And actually, some of those children’s voices can be heard on the title track of the EP. Amanda Abizaid was born in Lebanon, and then moved to the United States with her family when she was ten, eventually settling in Los Angeles. She is a singer and songwriter who plays piano, guitar and flute. And on her new EP she is joined by Stephen Stills on the title track.

Walking In Twos opens with its title track, featuring Stephen Stills on guitar. The song begins gently, with Amanda singing, “Oh, the time has come/When enough is enough/And healings are what need to start/Life is fragile/So we’ve got to get tough.” Then it becomes a sort of anthem, a song urging love and understanding, since we do all have some things in common. And I love the lines, “We can’t expect our youth to make changes, no/That we don’t help create.” Children join her to sing, “We can save the world with a smile/We can love the world like a child/Step in someone else’s shoes/Let the magic begin walking in twos.” And while those lines might strike you as a bit cheesy, apparently people still to hear this message. And then we hear the children singing their native language briefly, which is actually a wonderful moment in the middle of the song. And the song ends with percussion. This EP contains a second version of this song, “Walking In Twos - Electronica Remix,” which begins with the sounds of children, and then has a different beat prominent in the mix.

“Lion’s Den” is an interesting mix of acoustic instruments and electronica, adding up to a sweet and positive sound. I really like Amanda’s vocal performance here, though I could do without the little cat noises she makes periodically, which pull me out of the mood every time. Other than the cat sounds, this song is rather pretty. That’s followed by “Set It Up,” a trip hop song with an effective world atmosphere backing the vocals. “What do I have to do to faze you/To wake you/Do I have to break you?” I love getting immersed in the whole vibe of this song. Then “Release Me” also creates a vibrant, compelling atmosphere, with some interesting percussion. “You are my sunshine/On dark days/Lighting the way.”

“One Love” was previously released as a single, and it is the most fun tune on this EP, with its reggae beat and incredibly positive sound and attitude. If your spirits need raising, this song may very well do the trick. It’s followed by “Promises Of Love,” which features some beautiful vocals. Ahmed Kamal plays oud on this track.

CD Track List
Walking In Twos is scheduled to be released on March 3, 2017.
Posted by Michael Doherty at 8:56 PM