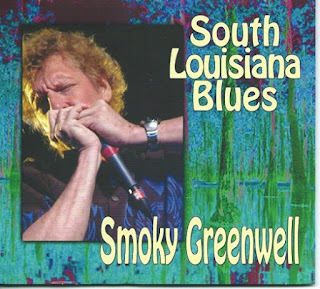 Lately I’ve been grooving on some good blues discs. Sometimes the blues hit you just the right way, you know? One of the discs I’ve been enjoying a lot is the new CD from Smoky Greenwell, South Louisiana Blues, which features some great work by Smoky on harmonica as well as vocals. This CD contains some original material by Smoky Greenwell and Jack Kolb, as well as a few Cornelius Green tunes and other covers. Jack Kolb is on guitar, David Hyde is on bass, and Doug Belote is on drums. They are joined by some guest musicians, including Joe Krown, Johnny Neel, Willie Pankar, Pete Bradish, Lynn Drury and Dana Abbott.

Smoky kicks off the new CD with an original song, “Animal Angels,” which he co-wrote with Jack Kolb. This tune has a very strong Booker T vibe right from the start, as well as a bit of a Canned Heat thing (think of their “On The Road Again”). So, yes, it’s got that great groove, with a 1960s power. Joe Krown is on the B3. Here is a taste of the lyrics: “Animal angels, that’s what we are/Animals angels, we’ve come so far/We wear our bodies like our clothes/Deep down we know/It’s a journey, let’s enjoy the ride.”  I love the groove and his vocals, but it is that harmonica that really gets me excited here. And he then follows it with a song that was a hit for Canned Heat, Wilbert Harrison’s “Let’s Work Together” (also known as “Let’s Stick Together”). This is a really fun, kind of bouncy rendition. Johnny Neel plays piano on this track, and Lynn Drury and Dana Abbott provide some nice backing vocals.

“Boogie Twist” is an instrumental track, the first of several on this disc. It was written by Cal Valentine and Wally Cox, and seems to be sometimes titled “Boogie Twist (Part II).” Johnny Neel plays B3 on this one. There is also some nice work on electric guitar. There are two other instrumentals, “The Hunch” (a delicious, groovy track written by Jack Kolb) and “Walking With Mr. Lee” (written by Lee Allen, and featuring Smoky on sax), which concludes the CD. And “Pick It Up,” an original tune written by Smoky Greenwell and Jack Kolb, is nearly an instrumental, apart from Lynn Drury and Dana Abbott’s “Pick it up” line repeated a few times. That’s another fun track.

One of my favorite tracks is Smoky Greenwell’s rendition of “Lonesome Lonely Blues,” a wonderful, somewhat mellow blues number written by Cornelius Green and Jerry West. This is the first of three Cornelius Greene numbers. Greene is better known as Lonesome Sundown. Smoky plays sax on this track, and Joe Krown provides some cool work on piano. “I’m so tired/Tired of living here alone/I used to have a good woman/Oh yeah, but now she’s gone.” This is a completely enjoyable version of an excellent tune. Smoky also covers Green’s “I Had A Dream Last Night” and “I’m Glad She’s Mine,” the latter co-written by Jerry West. Both of those tracks are also highlights, and I particularly love “I’m Glad She’s Mine,” which is some delicious rhythm and blues. Lynn Drury and Dana Abbott again come in with some delightful backing vocals. Johnny Neel is on piano. This is one of those songs that just keep me smiling the whole way through.