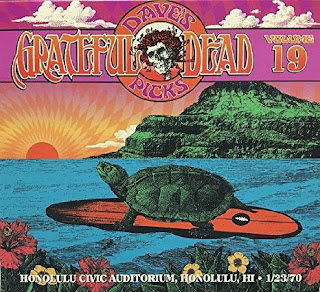 My all-time favorite album is American Beauty, which was released in 1970, when the Grateful Dead were favoring more folk and country elements. That was also the year of Workingman’s Dead, another of the band’s best records. Before either of those records was released, the Grateful Dead did a couple of shows in Honolulu. Dave’s Picks Volume 19 features the show from January 23, 1970, as well as a good chunk of the show from January 24th. This three-disc set features some songs that would end up on Workingman’s Dead (though none from American Beauty), as well as some of those great late-1960s numbers like “Dark Star” and “St. Stephen.” So this Hawaii run is really a pivotal moment for the band, as they moved from the heavy, powerful psychedelic jams (though of course they’d never truly leave those behind) to a more folk sound.

The first disc oddly begins with a bit of whistling, and a quick “Hello, hi ya” before the band launches into “China Cat Sunflower.” I love versions of “China Cat” from this time, because I really like that Tom Constanten keyboard part. He’d leave the band shortly after this show, actually. “China Cat” is fairly short, and it moves easily into “I Know You Rider.” From there, they go straight into “Black Peter,” a song that would be included on Workingman’s Dead. This is an excellent rendition, featuring lots of great peaks and valleys, and it’s interesting to hear Tom Constanten’s keyboard part on this song (though it’s mostly fairly low in the mix). And check out that guitar part at the end.

Jerry Garcia breaks a string, and Bob Weir tells a story about a dog while he changes it. It’s a silly joke, of course, but it’s such a treat to hear extended stage banter like that. He also jokes about the drummers. “There’s no arguing with a drummer either.” The band then goes into “Hard To Handle,” and we get the first Pigpen lead vocal of the show. It’s not all that long, but still has a bit of jamming, and of course some great vocals from Pigpen.

There is a bit of stage banter after “Mama Tried,” with the band saying they can’t hear the monitors. They then go into “Casey Jones,” another tune that would go on Workingman’s Dead. Sadly, “Take my advice” is the last we hear of this version, for the master reels are missing most of the song. The band then plays “Dire Wolf,” which is also on Workingman’s Dead. At the beginning, they riff on The Coasters’ “Seachin’” (with Jerry joking, “This is 1970, Jack, not ‘56”). It’s a good version, and from there the band goes to a fun rendition of “Good Lovin’” with Pigpen on lead vocals. This track includes a short drum solo, and I love when the guitar comes in over it, leading to the first big jam of the show. Not the last, of course, as the band follows “Good Lovin’” with “That’s It For The Other One,” usually labeled “Cryptical Envelopment” into “The Other One” back into “Cryptical Envelopment.” There is a drum solo before “The Other One.” (As a side note, I’ve always wondered why “Cryptical Envelopment” is correctly labeled as “Cryptical Envelopment,” while “The Faster We Go, The Rounder We Get” is always labeled as “The Other One.”) This goes right into “Dark Star,” so we hear just the beginning of “Dark Star” at the end of this CD, so as not to miss a note. It fades out after that intro.

You know if a Grateful Dead disc has only three tracks there is going to be a whole lot of jamming. Such is the case with the second disc. Three tracks, but sixty-two minutes of music. It begins with “Dark Star” (and yes, the last few seconds of disc one are repeated here, so that we get the transition from “The Other One”). And this is one of those interesting renditions that begins in a rather mellow way, with that cool hand percussion. The first verse begins within five minutes, and after it there are some odd and intriguing sparse moments. And that’s when things get Weird. This one goes in all sorts of interesting directions, and would certainly be a good version to listen to while tripping. And then around the seventeen-minute mark, they start the second verse. I love the way they sing the “nightfall of diamonds” line.

The band then slides easily into “St. Stephen.” It’s a short version, without the “St. Stephen will remain” verse, as the band suddenly goes into “Turn On Your Lovelight.” And this is one hell of a jam. Thirty-eight minutes, the length of an album! So you know that means some great vocal play from Pigpen. (And wait, who is that playing with him?) “Get your hands out of your pockets, fellahs!” Check out that great bluesy guitar around the sixteen-minute mark. And at one point Pigpen says he’s got the “Walkin’ Blues.” The whole thing builds to an energetic climax.

The third disc contains approximately an hour of music from the following night, January 24, 1970. The disc begins with a goofy bit of stage banter before the band kicks off with “Cumberland Blues.” They follow that with “Cold Rain And Snow.” “I married me a wife, she’s been trouble all my life.” After “Me And My Uncle,” Jerry announces that Bob broke a string. The band then goes into “I’m A King Bee,” and that’s when the set starts to get really good. It features some cool work on harmonica. This version has a great, mean, slow groove, and is one of the disc’s highlights. They follow that with a good rendition of “Mason’s Children,” a song that the Dead played only in 1969 and 1970. The line that made me laugh the first several times I heard this song (on tapes back in the 1980s) is “He’d hardly aged a day.” (He died on Monday, and they dug him up on Tuesday.)

The third disc also contains a really good rendition of “Black Peter.” Yeah, they played it both nights. As they did “Good Lovin’” which follows it. The sound gets weird at one point in this version of “Good Lovin’.” This version is shorter than that of the previous night, as it oddly fades out, but still contains some good jamming. (I searched for other recordings of this one, and it seems they all cut off at that point.) A sweet “We Bid You Goodnight” and an average “Dancing In The Street” round off the disc.