Getting A Cat Stevens Ticket 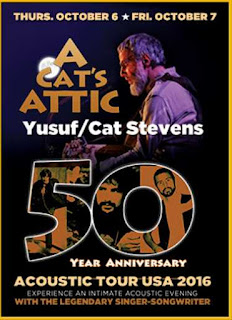 I’ve been a fan of Cat Stevens’ music since I was a kid, even before I saw Harold And Maude (which, by the way, is my all-time favorite film). I remember the only time I ever enjoyed a church service was when the organist was replaced by a female singer/guitarist who covered “Morning Has Broken.” Songs like “Miles From Nowhere,” “Tea For The Tillerman” and “Wild World” get in my head almost daily. “Trouble” makes me cry every time I hear it. I get excited when a movie like Rushmore features a Cat Stevens song (in that case, “Here Comes My Baby”). Basically, I just fucking love his music. And yet I’ve never seen him in concert.

Today, however, I purchased a ticket for a show he’s going to do on October 6th at the Pantages Theatre here in Los Angeles. It was a pain to get the ticket – there was a lot of incorrect information being given out – and it is the most expensive ticket I’ve ever bought, but I am thrilled to be going. I learned about the concert from an actor on Those Who Can’t, who was as excited as I was about seeing Cat Stevens. I saw that the price range of the tickets was $89.50 to $265.50 (which turned out to be one of the lies, but more on that in a bit), and that they were going on sale August 15th at 10 a.m. (or 9 a.m., as it was listed in at least one place on the site). I decided I had to take the day off, and ended up turning down three separate jobs for today. I knew I couldn’t be working and getting tickets at the same time, and my plan was to go down to the box office. That way I’d have a physical ticket, and perhaps I could avoid some of those criminal Ticketmaster fees. I called the venue, and was told that tickets would be available at the box office starting at 10 a.m. The guy didn’t think people would line up all that early for these tickets.

Last night I set my alarm for 5 a.m., and was out the door today by 6. I took the subway (there is a stop directly across the street from the venue), and arrived at the Pantages by 6:43 a.m. I know that because at 6:43 a.m. I sent my girlfriend a message saying, “I am first in line.” Then at 8:18 I sent her another message: “I am still the only person in line.” This didn’t worry me. I knew I was in the right spot, because a man had gone in through the door next to me, and he had assured me this was the spot for the box office. But at 8:35 a.m. another man came out and asked if I were there to purchase Cat Stevens tickets. He then informed me that the venue wouldn’t be selling any tickets, that all tickets had to be purchased online through Ticketmaster. “But I called the box office last week and was told you would have tickets here,” I said. He apologized that someone had given me that information, and told me that it wasn’t the venue’s decision, it was the artist’s. Apparently, in an effort to eliminate ticket scalpers, there are no paper tickets whatsoever, and you have to bring the very credit card you use to purchase tickets to the show and swipe it as you enter. You also have to type in your friend’s name if you’re going to purchase two tickets. So, I guess you can’t just purchase two tickets and decide later whom you wish to take with you. Crazy.

So I got back on the subway and went home. I got online and got everything ready by 9:15. And at 10 a.m. I attempted to purchase a ticket. The first few times I did, the site would tell me a seat was available, then tell me it was processing the transaction, then tell me that someone else had purchased that ticket. This happened at least three or four times. Then I started noticing that the tickets down front that were still available were much more than the $265.50 that was supposedly the high end. In fact, they were more than $400. What gives? Finally I was able to purchase a ticket for $265.50, but it is not anywhere close to the front. It’s in row SS. But it’s on the aisle, which I appreciate. With all the fees, the price came to $313.45, the most I’ve ever paid for a concert ticket. (Prior to this, the most expensive was a Leonard Cohen ticket for approximately $250.)

I wanted to go both nights – Cat Steven is playing on October 7th, as well as the 6th – but at that price, there is just no way I can do it. Still, I am incredibly excited that I will finally be seeing Cat Stevens in concert. By the way, even though he goes by Yusuf Islam these days, all the concert information has him listed as “Yusuf/Cat Stevens.” The word “Islam” appears nowhere in any of the promotional materials.

Posted by Michael Doherty at 11:44 AM