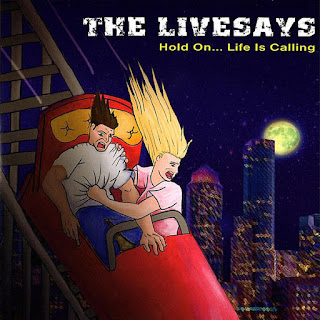 The Livesays are a Florida-based rock band led by vocalist, songwriter, guitarist and pianist Billy Livesay (who is known also for his work with Clarence Clemons), and featuring Victor “Cuqui” Berrios on organ and vocals, Jorge Laplume on bass, and Eddie Zyne on drums (I saw Eddie Zyne play with The Monkees back in 1986). The band’s new release, Hold On…Life Is Calling, features fairly straight rock, but with a bit of pop and a bluesy touch, sometimes reminding me of the feel of early ‘80s rock. It follows their 2014 release, Faith, Hope And Love, and 2011’s Rose Colored Glasses. Former member Timothy Murphy joins them on piano for a few tracks. Also joining them on this release are Luke Sipka and John Quinn, both on piano, as well as Victoria Livesay, Erminia Laplume, Debi Berrios and Susan Zyne on backing vocals for one track. All of the songs are originals, written or co-written by Billy Livesay.

The Livesays kick off the new CD with “I’m Coming Home,” a good rock song in which Billy sings, “Tried to sell my soul, but I couldn’t find a buyer.” There is something rough and worn in his voice, which is perfect for this song of someone who sings of experience. It starts off quietly, easing in, then kicks in to become more of a rock tune right when he sings that he is coming home, like that idea gives him more energy, more power. Why is it that songs about going home always work, always have a power over us? I especially like the organ in this song. The band then turns bluesy with “Angels Of The New Millennium,” which begins with a cool groove on drums. “The angels mourned the simple days/When ghostly taps were heard/The knights they bathed in soldiers’ blood/Down in Gettysburg.” It’s interesting that both of the first two tracks employ the image of angels. “Angels Of The New Millennium” was written by Billy Livesay and Louie Lawent.

“Pop Star” is one of the tracks having an element making it feel like an early 1980s rock tune, particularly in the chorus, reminding me of bands like Foreigner. This works well with its theme of wanting to ignore world events and become a pop star, and the band uses this sound to a kind of humorous, tongue-in-cheek effect. Check out these lyrics: “All I want before we’re smoked/By a vengeful god or the nuclear vote/Is a whole lotta fame, and an entourage.” I also really like these lines: “But all I want is what Jagger had/To swallow up some gorgeous gams,” mostly because I’m happy at the use of the word “gams.”  “Pop Star” was also written by Billy Livesay and Louie Lawent.

“Call On Me” has a kind of sweet, friendly vibe, a voice reaching out to those who are troubled. And hey, who isn’t, in one way or another? Timothy Murphy is on piano and backing vocals on this track, which was written by Billy Livesay and John Bradley. That’s followed by “I’ve Heard The Truth Before,” which features the excellent line “I’ve heard the truth before, and I’m trying to get over it.” This one also has something of a 1980s rock feel.

“Why You Want To Keep On Lovin’ Me” is one of the disc’s strongest tracks, opening with the lines, “You live alone, but you say that you’re not lonely/And don’t need love to keep you company.” It’s a strange sort of love song about receiving mixed messages. It has something of a pop feel, with some nice blending of vocals. Timothy Murphy plays piano on this track. Check out these lines: “Wake up and greet the day, you’re sleeping far too long/And there’s really nothing else that I can say/We’ve seen a lot of years and I know you have your fears/Don’t let your damaged goods get in the way.”

The album concludes with “Turn It Around,” a bright and positive-sounding tune. “I was a fool under your spell/But a fool in love can always tell/When there’s no shoulder to cry on/When the teardrops fall/And one by one I’m counting them all.” Victoria Livesay, Erminia Laplume, Debi Berrios and Susan Zyne join them on backing vocals, making the track a family affair.

CD Track List
Hold On… Life Is Calling is scheduled to be released on October 3, 2016. By the way, the proofreader in me was screaming as I read the liner notes. There are many typos and mistakes, such as “your” in place of “you’re” twice in the lyrics to “Turn It Around” (and once in “No Promises”). Also, “spend have the time” instead of “spend half the time,” and “lightning” is misspelled multiple times in the lyrics to “No Promises.” There is also “rap my head around” and “loose myself in the memory of you” in the lyrics to “It’s What I Have To Do.” And while the “thru” instead of “through” in “I’m Coming Home” might be deliberate, it is still incorrect. There are several other mistakes. Perhaps some of these can be corrected before the CD’s October release.
Posted by Michael Doherty at 9:00 PM