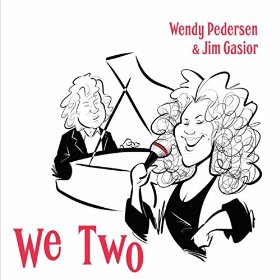 Vocalist Wendy Pedersen and pianist Jim Gasior have both been performing and recording for quite some time, and are known in the Florida music scene. Wendy Pedersen has put out several CDs of her own, and Jim Gasior has recorded with many artists and is also on the music faculty at the New World School of the Arts. They have recorded together on Wendy Pedersen’s 2007 release Under The Influence, and her 2010 release Boy Meets Girl, but We Two is their first album as a duo. On this new CD, they put their own delightful spin on some well-known compositions, including material by Gershwin, Ellington, Monk and Rodgers and Hammerstein. There are also a couple of playful combinations of songs, like “If I Should Lose You” paired with “If Ever I Would Leave You.” And actually it is that sense of play, that sense of fun, which makes this disc something special (which isn’t to say that they don’t take these tunes seriously). These are songs you’ve heard many times, but these two are able to make them fresh and lively.

The album opens with “The Late Late Show,” written by Murray Berlin and Roy Alfred, and famously recorded by Dakota Staton in 1957. This version has a lot of joy, and is a great way to get this CD off to a good start. “Stars above begin to glow/And we are putting on a late late show/Hear the crazy music in the trees/See the flowers dancing in the breeze.” Yes, this track sets the tone, giving you the feeling that everything that follows is part of their late, late show. And there is an absolutely wonderful piano solo. They follow it with “It Ain’t Necessarily So,” written by Ira Gershwin and George Gershwin. I’ve said it before, and I’ll say it again: You can’t go wrong with Gershwin. And this rendition has a very cool vibe, and is one of my favorite tracks. I love what Wendy Pedersen does with the line “But who calls that livin’ when no gal’s gonna give in to no man who is nine hundred years.” And she ends it in such a cute, adorable way.

Wendy and Jim combine “If I Should Lose You”(written by Leo Robin and Ralph Rainger) with “If Ever I Would Leave You” (written by Alan Jay Lerner and Frederick Loewe). I think those two titles together is rather playful, but of course “If I Should Lose You” has a more serious, somber sound. The transition between the two songs is done a cappella. I really like what they do with Duke Ellington’s “Everything But You” (which was co-written by Harry James and Don George), with Jim Gasior giving a little western tease at the beginning after the first line, “You left me a horse from Texas.” This is a delightful rendition, and it is certain to make you smile. It is another of my favorites, and is followed by another highlight, a fun, delicious rendition of Fats Waller’s “Jitterbug Waltz.” “Nothing to do but waltz.”

The other pairing of songs on this album is Irving Berlin’s “The Best Thing For You” with “Just You, Just Me,” written by Jesse Greer and Raymond Klages. I am happy that they begin with the verse, “Please let me say from the start/I don't pretend to be smart/I just suggest what I think’s best/Having your interest at heart,” which many versions leave out. There is actually just a bit of “Just You, Just Me” at the end of this track. (Whenever I hear that song, I can’t help but think of that scene from Woody Allen’s Everyone Says I Love You.) That one is followed by another highlight, a cool version of “Meet Me At No Special Place” and a nice version of Thelonious Monk’s “’Round Midnight.” The only track I could do without is “My Favorite Things,” a song I’ve never cared for (I should say it’s just the lyrics of that one that I don’t like; I’ve heard some cool instrumental renditions over the years).

CD Track List
We Two is scheduled to be released on March 4, 2016 through Jimmy G’s House Of Sound.
Posted by Michael Doherty at 10:45 PM