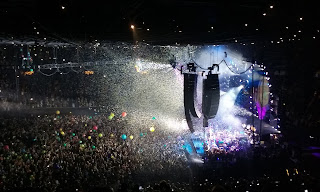 I never got to see the Grateful Dead on New Year’s Eve. By the time I had moved to the west coast, the New Year’s shows were a thing of the past. But I think I experienced a whole hell of a lot of that magic last night at The Forum in Inglewood, where Dead & Company played a nice, long show. It was the second of a two-night run, but I didn’t go the first night. This show was scheduled to start at 8 p.m., and the band took the stage at 8:16 p.m. That has to be as close to on time as these guys have ever been.

They kicked off with “Feel Like A Stranger,” which was perfect. It was a song my friend Jon and I both wanted to hear. And the line about midnight drew a cheer from the audience. It was a good version, too, with a nice jam. At one point during the jam, John Mayer got a little bluesy. After that fifteen-minute “Feel Like A Stranger,” they went into “They Love Each Other,” with John Mayer singing lead. This song featured some nice stuff on keys by Jeff Chimenti. And there was more great stuff on keys during “Ramble On Rose.” And then we were treated to “Loose Lucy” with a great, slow groove, followed by “Sugaree.” Hey, did John forget a line? During “Sugaree,” it turned midnight on the east coast. And holy moly, John gave us some fantastic guitar work. The first set then ended with “Hell In A Bucket,” a song I’ve always dug. Yeah, it was a short first set, only an hour and a minute. But we knew there was plenty more music on the way.

A relatively short set break (thirty-two minutes) and an incredibly long line for the bathroom meant some people missed the beginning of the second set, which is a shame, because the band opened it with “Dark Star.” “Dark Star” was fairly mellow to start, but it didn’t take too long to build in power. On the line “Searchlight casting,” Bob stretched out “Search.” After the second verse, the song got oddly chaotic for just a moment, then transitioned sweetly into “Uncle John’s Band,” which featured a wonderful jam with lots of energy. That led into “Terrapin Station.” (Hey, did they forget to do that section of “Uncle John’s Band” where they repeat the lines about “How does this song go?”) I have to say it’s still weird hearing John Mayer sing “Terrapin.” Bob took over lead vocals starting with the line “Inspiration.” Bassist Oteil Burbridge got on Bill’s kit for part of the “Drums” segment, which was good, but not quite as good as “Drums” from the Worcester show (the only other Dead & Company show I’ve attended). And then during “Space,” was that a “St. Stephen” tease I heard? This was a really interesting “Space,” at one point rumbling my rib cage. As they did at the Worcester show, the eased into “Dear Prudence” from “Space,” and it was a really sweet rendition. That ended the second set, which was an hour and three minutes.

There were some good people seated around us at this show. One guy, Tyler, really wanted to hear “Fire On The Mountain.” Jon and I assumed we’d hear “Sugar Magnolia.” So my prediction for the third set was “Sugar Magnolia” into “Scarlet Begonias” into “Fire On The Mountain” into “St. Stephen.” I called it, and was right, sort of. At 11:42 p.m. the band returned to the stage and opened with a very fun rendition of “In The Midnight Hour,” a song that oddly none of us considered in our predictions and guesses, but which seemed obvious once they started it. At Bob’s urging, the crowd echoed “Wait.” When they finished that song, there were still four or five minutes until midnight, so the band started a little jam, during which some characters, including Father Time, started coming out onto the stage. Then, reminding us of Bill Graham, two more people flew over the crowd in a giant joint, eventually landing on the stage, as the Star Wars theme played over the sound system (Father Time had a blue lightsaber), and there was a quick New Year’s countdown, followed by the balloons and confetti dropping onto the audience and stage. It was beautiful. And then the band started “Sugar Magnolia.” And yes, they went into “Scarlet Begonias,” and this was a seriously fantastic version. Then, rather than going into “Fire On The Mountain,” the band surprised us by going into “Touch Of Grey.” Bob’s voice seemed a bit worn out at the beginning of the song, but it was still a really good version. And after that, they went into “Fire On The Mountain,” with Bob sounding really rough. They ended it with a sudden shout of “Fire!” After a brief pause, the band started “St. Stephen,” and even though I had guessed they would play it, it still completely thrilled me. It was a song that of course I had never seen the Grateful Dead do, and Dead & Company did such a wonderful rendition. The jam became really beautiful before they returned for the last verse. And then they ended the third set with “Sunshine Daydream.”

The third set ended at 12:50 a.m., and it was only a minute or two before the band returned to the stage for the encore. John Mayer thanked everyone for accepting him in the group, and said, “This musical experience has changed my life forever.” Ah yes, the Dead sure do have that effect on people. John then dropped a hint about more to come in the new year, which of course made everyone happy. Making me happier still was the encore, a sweet and moving version of “Brokedown Palace,” one of my favorite songs, and a perfect way to end the night. And actually, as the song was ending, they played a little of “Auld Lang Syne,” without the vocals. The show ended at exactly 1 a.m.

Set I
Set II
Set III
Encore
Here are a few photos from the night:

Posted by Michael Doherty at 12:32 PM