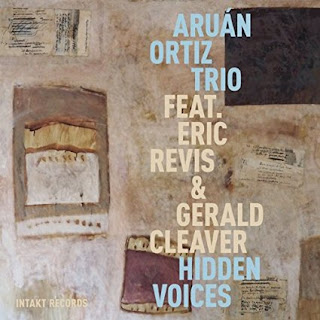 Aruán Ortiz is a talented jazz pianist who composed music for the 2015 film Sin Alas, and who leads his own trio. On his new CD, Hidden Voices, Aruán Ortiz Trio is made up of Aruán Ortiz on piano, Eric Revis on bass and Gerald Cleaver on drums. Most of the material here is original compositions written by Aruán Ortiz, but there are also a few good choices of covers, including material by Ornette Coleman and Thelonious Monk.

The CD opens with “Fractal Sketches,” and Aruán Ortiz begins it on piano. Soon Eric and Gerald join in, and things get very interesting. This track has a kind of insistent vibe about it early on. There is nothing relaxed or too loose here, at least not at the start. It is like a well-structured chaos, if that makes any sense, with all three musicians having plenty to say within that structure. There is even a very cool drum solo which emerges approximately four and a half minutes in.

“Open & Close/The Sphinx” then begins with a wonderful bass solo. Then while the bass repeats a short rhythm, the piano and drums get a little wild above it, with deliciously chaotic-sounding moments. I love these moments, because it sounds like everything is possible, and the world is whipping around freely and joyfully. This is one of the CD’s few covers, and was written by Ornette Coleman, “The Sphinx” originally appearing on his Something Else!!!! LP. Ortiz has covered Coleman before. On Vol. 1, Aruán Ortiz Trio did Coleman’s “Invisible” (which was also from that same Coleman LP).

“Caribbean Vortex/Hidden Voices” is an interesting track, feeling like the score to a strange, intense foreign film where you’re following one particular character, knowing something is going to go wrong very soon. And then approximately halfway through, it changes, feeling just a bit more relaxed, a bit brighter, even happier. Arturo Stable and Enildo Rasúa play claves on this track.

“Analytical Symmetry” also has a kind of intense vibe at the beginning, with that steady rhythm working on your mood. Then suddenly nearly two minutes in, it breaks in a wonderful way, bursting to some other joyous, wild level. I love it. Aruán Ortiz is so adept at creating and controlling a mood, and then once you’re at home in it, suddenly changing it on you. This track suddenly turns introspective, contemplative, with the piano and bass voicing short thoughts, while Gerald works the cymbals steadily beneath. This is music you can get caught up in and react to in a strong way, particularly when it returns to that intense section toward the end. This track is for me one of the CD’s highlights.

At the beginning of “Joyful Noises,” it sounds like the sheet music becomes an instrument itself, its rustling heard prominently. It’s like the whole room is tuning up, preparing for something. This composition is by all three members of the trio. It’s followed by “Skippy,” one of the album’s few covers, this one written by Thelonious Monk (one of Monk’s early compositions). It’s an interesting rendition, with a cool lead part by Eric Revis on bass. The album then ends with another cover, “Uno, Dos Y Tres, Que Paso Más Chévere,” written by Rafael Ortiz, this version having a rather serious, somber feel.

CD Track List
Hidden Voices is scheduled to be released on January 29, 2016 through Intakt Records.
Posted by Michael Doherty at 5:21 PM