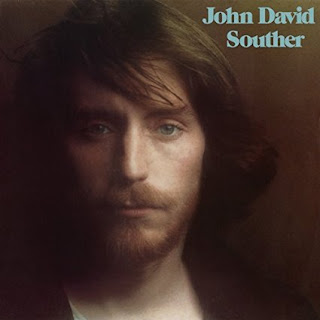 John David Souther might be primarily known for his songwriting – he was inducted into the Songwriters Hall of Fame in 2013 – but he’s also released some damn good albums, including his self-titled debut, on which he sings and plays guitar. Now that first record has been re-issued in an expanded edition with plenty of bonus tracks, mostly demos, all of which were previously unreleased. There are also new liner notes written by Scott Schinder, with excerpts from a recent interview with J.D. Souther. This album is full of excellent country rock material, including “Run Like A Thief,” which was covered by Bonnie Raitt, and “How Long,” which was covered by The Eagles (J.D. Souther co-wrote a number of The Eagles’ hits). Glenn Frey plays guitar on a few tracks on this album. (Before this record, Souther and Frey released an album under the name Longbranch/Pennywhistle.) All of the tracks on this album were written by J.D. Souther.

The album opens with “The Fast One,” a wonderful country rock tune with good, clear vocals and of course some great lyrics. It begins with these lines: “You don’t know how I feel/You don’t seem to care/If I let you see it through my eyes/You wouldn’t see anyone there.” Not bad, eh? This is one of the songs on which Glenn Frey plays guitar. Plus, this track features Gib Guilbeau on fiddle. There is a demo version of this song in the bonus tracks, and it has a slightly slower folk feel, with just guitar and vocals. “The Fast One” is a song that Linda Ronstadt covered on her 1973 record Don’t Cry Now. That song is followed by “Run Like A Thief,” which has a mellower and more serious vibe. This is a song that Bonnie Raitt covered on her 1975 record Home Plate. It’s an excellent song (which is basically par for the course on this CD). And a demo of this one is included in the bonus tracks.

One of my favorites is “Jesus In 3/4 Time,” which has this wonderful, kind of sad tone, with touches of gospel, and features David Jackson on piano. This is another track with Glenn Frey on guitar. Check out these lyrics: “Once I was saved/That one was free/I’d be pleased to know just where I stand/Living for Jesus and making it pay/Well now, nobody lives quite that long/Once I was baptized/Now I am free/To sing you a new gospel song.” Yeah, this guy sure writes some good lyrics. The bonus tracks include a demo version of “Jesus In 3/4 Time,” and I really love this version too. It obviously has a more raw sound, and that really works for this song. There is no piano. I like the simultaneously rough and pretty quality of the demo.

“White Wing” has a delicious bluesy vibe, and it features Joel Tepp on harmonica. It’s a very cool tune, but the following track, “It’s The Same,” is probably my absolute favorite. It’s so beautiful. “In the crowded part of heaven/There’s room enough for pain/On the lonely side of living/Without you it’s the same.” Gary Mallaber plays piano on this track.

“How Long” is a more energetic country rock song. This is one that The Eagles performed in concert in the 1970s, and also included on their 2007 CD Long Road Out Of Eden. This original version by J.D. Souther is much better. (Interestingly, Glenn Frey does not perform on this track.) “Like a blue bird with his heart removed, lonely as a train/I’ve run just as far as I can run/Well, if I never see the good old days shining in the sun/I’ll be doing fine, and then some.” The bonus tracks include a demo version of this song, with just vocals and guitar.

The bonus tracks also include “One In The Middle” and “Silver Blue.” “Silver Blue” is one that would end up on Souther’s next album, 1976’s Black Rose. Linda Ronstadt covered this one as well, including it on her Prisoner In Disguise record (with J.D. Souther on harmony vocals). The phrase “silver blue” was also used in “It’s The Same”: “Will that silver blue turn golden by and by.” The demo version of “Silver Blue” doesn't include that great bass line from the Black Rose version, but is still one of the highlights of this CD. It’s such a great song.

CD Track List
This special expanded edition of John David Souther was released on January 8, 2016 through Omnivore Recordings. By the way, J.D. Souther is also an actor, and he played a significant role in one of my all-time favorite television shows, thirtysomething.
Posted by Michael Doherty at 1:28 PM