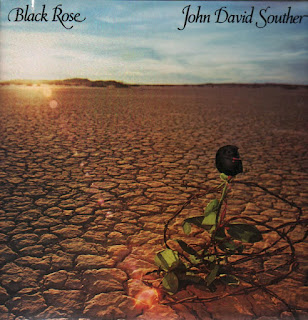 On January 8, Omnivore Recordings released John David Souther’s first solo album, the 1972 self-titled record, with several bonus tracks. Now his second solo album, Black Rose, is being re-issued, also with bonus tracks, most of which were previously unreleased. Glenn Frey played guitar on a few tracks on the previous album, and he joins Souther again for a couple of tracks on this release. Fellow Eagles member Joe Walsh also joins Souther on this album, and there are lots of other great guest players. The original album features all original material, written by J.D. Souther, and most of the bonus tracks are also original numbers. This expanded edition includes new liner notes by Scott Schinder, with excerpts from a recent interview with John David Souther.

The album opens with “Banging My Head Against The Moon,” a fun tune with a kind of reggae vibe. “But the way I feel today/I think love is here to stay/You got something and I want it all.” This track features backing vocals by David Crosby, Art Garfunkel and Andrew Gold. That’s followed by “If You Have Crying Eyes,” a truly pretty country pop tune with Linda Ronstadt on harmony vocals. They sound wonderful together. Both Glenn Frey and Andrew Gold play electric guitar on this track. Andrew Gold also plays electric piano. “I don’t mind if it takes us a little longer/I’m willing to stay here and love you, love you ‘til dawn/It’ll be all right.” This song builds beautifully toward the end.

“Faithless Love” is another beautiful song, and one that Linda Ronstadt covered on her 1974 record Heart Like A Wheel (John David Souther appears on that album). Glen Campbell also later covered it. This version by J.D. Souther features Charles Veal on viola, and both Dennis Karmazyn and Ray Kelly on cello (and I learned something from the liner notes: celli is one plural form of cello). Here is a taste of the lyrics: “Too many stories/Too many heartbreak songs/Where nobody’s right/And nobody’s wrong/Faithless love will find you/And the misery entwine you/Faithless love/Where did I go wrong.” The bonus tracks include a live version, recorded in Los Angeles in October of 1976. In his introduction, he refers to Linda Ronstadt’s version (“It makes it a little hard to do, but here it goes”).

Joe Walsh joins Souther on slide guitar for “Baby Come Home.” David Crosby provides some backing vocals on this track. “You were my queen/A little fool for a king/In the reign of misery/All this time has gone by/Dried these tears in my eyes/Trying to smile at the memory.” This song also has a nice string section. And then the first lines of “Simple Man, Simple Dream” make me laugh: “What if I fall in love with you/Just like normal people do/Well, maybe I’d kill you/Or maybe I’d be true.” J.D. Souther sure can write a damn good lyric.

One of my favorite tracks on the expanded edition of J.D. Souther’s first album was the bonus track demo version of “Silver Blue.” And on this album, we get the official version. And again, it’s one of my favorite tracks on this CD. This version has that wonderful bass work by Stanley Clarke. There is also a cello, an instrument I always appreciate. This is just an absolutely excellent song. “If you were ever lonely/You never let it show/But someday baby/You’ll be here/And I’ll be going home/Without you/And blood on both my hands.”

“Midnight Prowl” is such a cool tune, with a bit of a funky edge. And I love that horn. That’s Donald Byrd on flugelhorn. Lowell George (from Little Feat) plays slide guitar on this track. “Doors Swing Open” is a powerful song that kind of sneaks up on you. You don’t realize for a while that this song has its hold on you. At least, that is my experience with it. Check out these lines: “What’s the difference/Who started it now/I’d have thought/You’d be past that somehow/It’s not just what I’d call/Making a friend/It looks more like the start of an end.” And I love that moment with the violins halfway through the song. The original album then concludes with its title track, “Black Rose,” which features backing vocals by Ned Doheny, Glenn Frey and Don Henley.

The bonus tracks include two versions of “Songs Of Love,” an excellent song that would be included on J.D. Souther’s 1979 LP You’re Only Lonely. The first is a band demo, the second a solo demo (vocals and piano). “I know I’ve been wrong/In so many songs/That I must have been right/In one.” (In the solo demo he sings, “But I’ve been wrong.”) There is also a demo of “I Can Almost See It,” a song that Linda Ronstadt did on her 1973 record, Don’t Cry Now.

The only song on this CD not written by John David Souther is “Cheek To Cheek,” which was written by Lowell George and Van Dyke Parks. It is also the only of the bonus tracks to have been previously released; it was included on Lowell George’s only solo album, Thanks I’ll Eat It Here. The bonus tracks also include a demo version of “Border Town,” a song that J.D. Souther included on the self-titled 1974 record by The Souther-Hillman-Fury Band. I actually prefer this demo version. And there is an instrumental piano demo version of “Texas Nights And Mexican Moons.”

CD Track List
This special re-issue of Black Rose is scheduled to be released on February 12, 2016 through Omnivore Recordings.
Posted by Michael Doherty at 5:30 PM