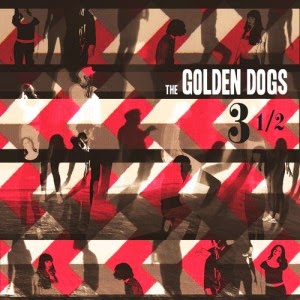 The Golden Dogs formed well over a decade ago, with the husband and wife team of Dave Azzolini and Jessica Grassia at its core. Their new release, 3 1/2, finds the group with some changes. Jessica has moved from keyboards to drums, and the band has two new members: Stefanie McCarrol on keyboards and guitar, and Alejandro Cairncross on bass. But this Toronto group is still producing wonderful, high-energy pop-rock tunes, with both male and female lead vocals.

The group kicks off their new CD with “Decided,” which has a very cool groove and certain elements of 1970s dance music. I’m particularly fond of the bass line in this song. And the vocals are impressive. “The look upon my face/I can’t disguise it/The look upon my face/I can’t deny it.” The song takes some progressive turns toward the end, with some wild work on guitar.

They follow that with “Do It For You,” a seriously fun bit of pop joy with delicious vocals and lots of energy. It has an unusual opening, with a repetitive little intro that stops with the sound of glass shattering, like this song is joyfully bursting through the song that might have been, and taking over with a bright power. “Been working so hard/I just want to strangle the boss man/Curse upon the bastards/For making me do it faster/This living will be my doom/I do it for you.”

“Pretending” is likewise a pop-rock song of great energy. That delightful groove at its start sets the tone, and the song just takes off from there. This is music to get you moving, get you smiling. And they keep it going with “Feel Like A Bridge,” another of my personal favorites. It takes a surprising turn toward the end.

The CD concludes with “MK Ultra,” the album's only instrumental track. It follows “Spider Legs,” which ends with an extended electronic instrumental section, and so flows well from that track. It gets pretty wild and intense, while remaining essentially a dance track. After a while, you might feel like a test subject from the MK Ultra program, or perhaps wish to be.