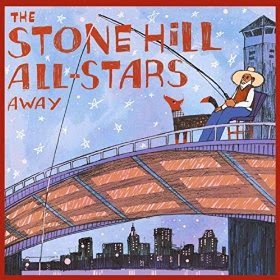 The new album from The Stone Hill All-Stars, Away, was recorded in a single day, like the old jazz records (though with a few things fixed later). This is remarkable because the album contains nearly an hour of original music, and it’s all really good. There are no weak tracks, and nothing feels messy or incomplete. These guys are some damn fine musicians (check out the lead guitar in the instrumental section of “Jones Et Al V. Petrie” for example). There is a Latin flavor to much of the material, which is part of what makes this such an enjoyable album. Seriously, this CD has me smiling and feeling good every time I listen to it. All tracks were written by Paul Margolis. In addition to some great sounds, this album is full of interesting lyrics, such as these from “Every Step”: “It’s nothing new, and we know better/Than to expect some kind of tether/To hold these things together/Until they’re replaced by something newer/Eyes are losing focus; ears are ringing louder/Nothing can provoke us with our hearts so dim and clouded/Every step is clipped and measured/Like a bird without its feathers.” Excellent, right?

The band gets things going with “Away,” the CD’s title track. And right away there is a great playful vibe, with prominent accordion and even jaw harp (that’s Tom Chalkley on jaw harp). Here is a taste of the lyrics: “She’s moving to the city, said she won’t be coming back/Away, away, she’s moving far away/I said I’d try to come and visit but she looked the other way/As if to say she’d rather that I stay far away from her/She didn’t bother with the words.” There is some really nice work on guitar in the instrumental section.

That’s followed by “Out Across The Frozen Lake,” which begins with some tasty stuff on keys, and takes on a groovy jazzy feel almost immediately. It tells a good and humorous tale of a man and woman at the beginning of winter, introducing the woman with these lines: “Her clerical mistake sent the winter’s supply of salt/To an empty stretch of asphalt/Sheila typed an “e” in place of a “3”/And dispatched all crews a mile west of wounded knee.” The approach might remind you at times of Tom Waits. And there’s a good saxophone lead section.

“Bent And Reversed” is one of my personal favorites, with its cool percussion and sweet harmonica, and its unusual lyrics. “She remembers a time when she was alone/Before her home was a haven for these profane invaders/To thin out the crowd she strains in vain to scream aloud/But no sound comes out her mouth.” I just love the whole vibe of this tune. And it’s followed by “Into The Van,” an interesting track with a seriously fun groove but surprisingly serious lyrics dealing with animal abuse. “He’s called the runt, he bears the brunt of attacks on his scarred back/He won’t turn to face the kid, no matter how hard he hits/A drizzle of air twists down through his snout/He coughs it out.”

“Despite The Current Mess” is another of my favorites (and is my favorite song title of this release). From its opening on acoustic guitar, this song has both a beauty and an intensity, and I particularly like the keyboard. “Despite the current mess he’d almost kept himself together/A coursing in his limbs/Beneath the level that seems real to him/Where he feels too much within/Like his skin is paper thin.”

“All Along The Waterfront” has a sort of jazzy bliss to its sound, which I love. It’s one to get your toes a-tapping. Plus, it has a delicious lead on saxophone. And I dig these lines: “Margaret asked if he would leave/He lacked, she claimed, the traits that separate man from beast/He packed his plastic suitcase and he wandered to the street/When Margaret asked if he would leave.” This is yet another of the CD’s many highlights.

The Stone Hill All-Stars are Hoppy Hopkins on drums and percussion; Dan Naiman on bass and saxophone; Paul Margolis on guitar, bass and vocals; Tim Pruitt on guitar and backing vocals; and John Shock on keyboard, accordion, harmonica and vocals. Joining them on this release are Jim Hannah on percussion, Mike Barth on backing vocals, Tom Chalkley on harmonica and jaw harp, and Steve Raskin on guiro.