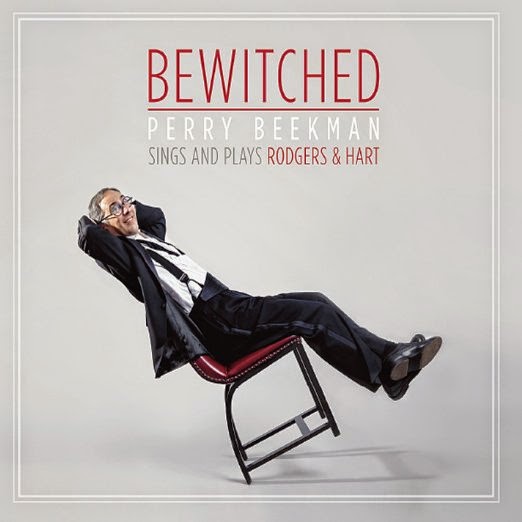 Perry Beekman is a jazz vocalist and guitarist who has been performing in the New York area for the past twenty-five years. While on his 2013 release, So In Love, Beekman covered some of the work of Cole Porter, his latest album, Bewitched: Perry Beekman Sings And Plays Rodgers & Hart, finds him tackling familiar standards from that great songwriting team of Richard Rodgers and Lorenz Hart. Joining him on this release are Peter Tomlinson on piano and Lou Pappas on bass, who both also played on So In Love. The fifteen tracks on this release include some of Rodgers and Hart’s most famous compositions, such as “Have You Met Miss Jones,” “Falling In Love With Love,” “My Heart Stood Still,” and of course the title track, “Bewitched, Bothered And Bewildered,” here simply titled “Bewitched.”

Perry Beekman kicks off this release with “I Wish I Were In Love Again,” a song from the 1937 musical Babes In Arms. Beekman delivers a catchy rendition which features a nice bass line by Lou Pappas. This is a fun song, with lines like “The broken dates, the endless waits/The lovely loving and the hateful hates/The conversation with the flying plates/I wish I were in love again.” I think he could possibly have a little more fun vocally with this one, but I do really like what he does on guitar.

That is followed by “Mountain Greenery,” a song from 1926’s The Garrick Gaieties. This one has been recorded by Bing Crosby, Ella Fitzgerald and Mel Tormé, among others. The version here features some really nice work by Peter Tomlinson on piano. Peter Beekman delivers a cool instrumental rendition of “Have You Met Miss Jones,” with some interesting stuff on bass by Lou Pappas, including a lead section. This CD also includes an excellent instrumental version of “Blue Room,” with the piano taking a delightful lead spot to start. I absolutely love what these three musicians do with this composition. This might be my favorite track on this release.

“Bewitched, Bothered And Bewildered,” or simply “Bewitched,” is a song from the 1940 music Pal Joey, and has been covered by everyone from Frank Sinatra to Lady Gaga. It’s one of those inherently excellent songs that work every time. While this version lacks the beauty of, say, the Sarah Vaughan version, it has a cool vibe that I enjoy, and has a sort of friendly intimacy (like the way he delivers the line “She can laugh, but I love it”). I also really like the instrumental section toward the end.

Perry Beekman delivers an interesting rendition of “It Never Entered My Mind,” first presenting it as a truly pretty solo guitar instrumental, and then two minutes into the track he adds his vocals. This, for me, is one of the CD’s highlights. He gives a moving version of this song which was originally from the 1940 musical Higher And Higher. “There’s A Small Hotel” is another highlight, because of the playful aspect and because of the wonderful work by all three musicians during the nice, long instrumental section.

This album concludes with “The Lady Is A Tramp,” a tune from Babes In Arms which has been covered by Frank Sinatra, Ella Fitzgerald, Lena Horne and Shirley Bassey. It's the instrumental section that makes the version on this CD really work. There is some wonderful stuff there, and I love the way the guitar and piano work together.