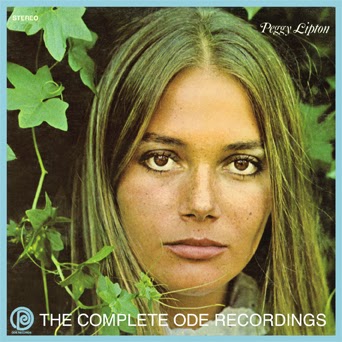 Peggy Lipton is known primarily for her acting career, particularly as Julie Barnes in The Mod Squad and Norma Jennings in Twin Peaks. But she also has worked as a singer, releasing one full-length album as well as several singles in the late 1960s and early 1970s. The Complete Ode Recordings is a collection of those tracks (including a few that were previously unreleased), and features new liner notes with several photos. The majority of these songs are covers, but Peggy Lipton contributes some original material too (as an interesting side note, Peggy Lipton composed some music for the wonderful Robert Altman film, Brewster McCloud).

This CD opens with one of Peggy Lipton’s compositions, “Let Me Pass By,” a strong and thoughtful track. Here is a taste of the lyrics: “But in the mirror every day/I close my eyes and change my ways/And I can’t believe what I’ve been used to/I know it’s wrong, I’ve been living a lie/Stand back and let me pass by.” “San Francisco Glide,” one of the CD’s prettiest songs, was also written by Peggy Lipton. This one really drew me in, and is an interesting look at the city of San Francisco. “Now that the city is ours I feel like you’re closer to me.” She also composed the instrumental number, “Memories Of A Golden Weekend (Or How I Got The Acapulco Blues),” the album’s longest title and shortest track.

Peggy Lipton delivers a really good rendition of “A Natural Woman,” which was written by Gerry Goffin and Carole King, and most famously recorded by Aretha Franklin. This is an inherently beautiful song, and Peggy Lipton adds a bit of her own style to it. Here she shows just what she’s capable of vocally, turning in an emotional, honest performance. She covers a couple of other Goffin/King compositions on that full-length self-titled record: “It Might As Well Rain Until September” and “Wasn’t It You.” Her version of “It Might As Well Rain Until September” is quite a bit different from King’s original 1962 version, making it a sweeter, slower number.

She also covers some of Laura Nyro’s material, including “Stoney End,” which she also released as a single (with the flip side being “San Francisco Glide”). “I was raised on the good book, Jesus, ‘til I read between the lines/Now I don’t believe I want to see the morning.” “Hands Off The Man (Flim Flam Man),” written by Laura Nyro, is one of this collection’s most fun tunes. Peggy Lipton also released Laura Nyro’s “Lu” as a single.

The original album concluded with another original composition, “Honey Won’t Let Me,” one of my favorites. Her vocal delivery is particularly beautiful and moving, and I like the guitar part that begins this song. “I’ve been here before/And I’ve dreamed here before/And yesterday I could say I knew the way to go home.” I love the echo of “to go home.”

Peggy Lipton released “Red Clay County Line” as a single in 1969. Written by Jimmy Webb, this song was also recorded by The Fortunes. I really like Peggy Lipton’s rendition, especially the energy of that instrumental section. The single’s flip side was “Just A Little Lovin’ (Early In The Morning),” a song written by Barry Mann and Cynthia Weil, and also recorded by Dusty Springfield. I also like Peggy Lipton’s rendition of Donovan’s “Wear Your Love Like Heaven,” which was released as a single. It begins with a wonderful little tease of his “Sunshine Superman,” before slowing down and easing into “Wear Your Love Like Heaven.”

This collection ends with four previously unreleased tracks, including “I Know Where I’m Going,” an original composition by Peggy Lipton, a road song with a good vibe. She also covers the Burt Bacharach/Hal David song “Wanting Things,” which was written for the musical Promises, Promises, and The Beach Boys' “I Just Wasn’t Made For These Times” (from that band's excellent Pet Sounds). The final track is “Now That Everything’s Been Said,” which was written by Carole King and Toni Stern.