“Stoned: A Psych Tribute To The Rolling Stones” (2015) CD Review 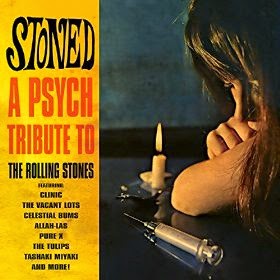 Someone at work recently put it well. He said The Rolling Stones have become the best Rolling Stones cover band. They’ve basically ceased to be a creative entity, and are simply covering the material they wrote back when they still had that drive. Maybe so. Sure, The Rolling Stones haven’t put out a decent studio album since 1981. But from the band’s conception through that year, these guys wrote and recorded an astounding amount of incredible material. Stoned: A Psych Tribute To The Rolling Stones explores some of those great songs, giving them a new twist, a new life, with the focus being on the psychedelic aspects of the material. While The Rolling Stones themselves are perhaps the best Rolling Stones cover band, the artists on Stoned deliver some truly interesting renditions of some of that group’s familiar material, such as “Sympathy For The Devil,” “Under My Thumb” and “Beast Of Burden,” as well as some lesser known material such as “Stoned.”

This collection kicks off with Lorelle Meets The Obsolete’s rendition of “What A Shame,” a bluesy song from early in The Rolling Stones’ career. This version by Lorelle Meets The Obsolete comes on harder, but still has that blues core. It’s followed by UK duo The KVB’s version of “Sympathy For The Devil” and Copenhagen band Shiny Darkley’s rendition of “Under My Thumb.”

For me, things begin to get really interesting with Paris band Yeti Lane’s version of “Sway,” a song that was originally included on that fantastic 1971 record Sticky Fingers. This is a heavier take on the song than that original version, with some good, loud work on guitar and some cool madness on drums. That’s followed by Clinic’s version of “It’s Only Rock ‘N’ Roll (But I Like It),” one of the most unusual takes of a Rolling Stones song on this CD. This one is quite a bit different from the original, with an added a spoken word section (“I’m a forty-five-year-old man trapped inside the body of a forty-five-year-old man, and I like it”), and it totally works for me. I really like the direction Clinic took on this one, even if they basically dispensed with most of the song’s original lyrics (lyrics that I absolutely love, by the way).

Sons Of Hippies’ “Gimme Shelter” is more faithful to the original, and is quite good. The Vacant Lots’ rendition of “She Smiled Sweetly” is a large departure from the sweet, moving original track from Between The Buttons. It has more of a rock thing, but with a strangely haunting, darker vocal approach.

“Child Of The Moon” was released as the flip side to “Jumpin’ Jack Flash,” and later included on More Hot Rocks (Big Hits & Fazed Cookies). Barcelona band Celestial Bums does a very cool version of this song, at times sounding a bit like The Velvet Underground. But perhaps my favorite track on this release is Tashaki Miyaki’s version of “Take It Or Leave It,” which was originally included on Flowers (and on the British version of Aftermath). Tashaki Miyaki’s version is fairly faithful, and has a sweet feel to the groove that I love.

Allah-Lahs, from Los Angeles, tackle “Stoned,” a very early blues number from The Rolling Stones. This was the flip side to the band’s second single, with minimal lyrics (“stoned…out of my mind”) over a familiar groove. Allah-Lahs reduce the lyrics to just “stoned,” but that’s just fine. It’s all about that great groove, which this band is clearly having a good time with.

“(I Can’t Get No) Satisfaction” is a song that I could easily do without for the rest of my life. That being said, Pink Velvet does a good job with it. The album is rounded out with versions of “Beast Of Burden,” “As Tears Go By” and “Wild Horses.” I am particularly fond of Cheval Sombre's beautiful rendition of “As Tears Go By.”

CD Track List
Stoned: A Psych Tribute To The Rolling Stones was released on January 20, 2015 through Cleopatra Records.
Posted by Michael Doherty at 4:23 PM