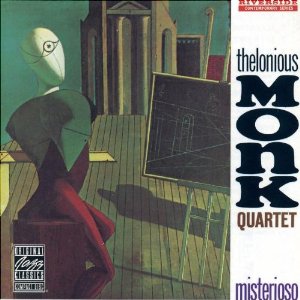 Concord Music Group is releasing a special re-issue of Thelonious Monk Quartet's 1958 album Misterioso as part of its Original Jazz Classics Remasters series.  This series has already given us re-issues of Thelonious Monk's Thelonious Alone In San Francisco and Monk's Music.

Misterioso is a live recording from the summer of 1958 at The Five Spot Cafe in New York City.  It features Johnny Griffin on tenor sax (listen to him fly in the incredible version of "In Walked Bud" included on this disc). And of course it features some amazing playing by Thelonious Monk.  One thing I love is that Monk's playing is always surprising - to us, and, it seems, often to himself.  So his music always has a great lively, youthful feel.

Most of these songs had been recorded by Thelonious Monk before and released on earlier albums.  All of these tracks were written or co-written by Monk, with the sole exception of "Just A Gigolo."

This special re-issue contains three bonus tracks, for a total of more than twenty-eight extra minutes of music.

Misterioso kicks off with "Nutty," a strange tune that at first sounds a bit off, like it's not quite put together correctly.  But quickly its unusual structure, its seeming disjointedness becomes part of its charm.  I particularly like Johnny Griffin's work on sax.  It seems he's the one who decides to take over and put the tune on track, and then goes a little nuts himself.  When he takes a breather, the song becomes softer, with a steady rhythm by Ahmed Abdul-Malik on bass and Roy Haynes on drums.  And Monk takes the lead spot on piano.

"Blues Five Spot" begins with just piano, seeming just the slightest bit hesitant. But the song very quickly finds a great, lively groove.  And again it's Johnny Griffin who jumps in front, taking the lead, and after a few minutes, everyone else drops out for a moment so he can solo.  His is a playful (and even a bit silly) solo.  But my favorite part of this composition is when Griffin takes a break, and Thelonious Monk takes the lead.  He then soon fades to the background so that Ahmed Abdul-Malik can take a lead spot on bass.  Very cool.  That leads to a drum solo.

"Blues Five Spot" is one of my favorite tracks.  It has such a great vibe.

The only cover on this album is "Just A Gigolo," written by Irving Caesar, Leonello Casucci and Julius Brammer.  This is also the only track that is Thelonious Monk playing solo.  It's also the shortest track, at just over two minutes. You can hear a lot of the crowd noise at the venue on this track.

The album's title track, "Misterioso," is a song that Monk originally recorded a decade earlier for Blue Note.  It's a wonderful tune, with a simple, yet catchy bass line by Abdul-Malik.  It's one of Monk's excellent blues pieces. And this version features great stuff from Johnny Griffin.  There is some interesting work on drums by Roy Haynes too - for a short moment his sharp hits on the snare seem like repeated attacks, gun shots.  And then seven and a half minutes in, Monk takes the lead.  And then the song eventually ends where it began.

This re-issue has three bonus tracks.  The first is "Evidence."  This song, for me, feels tense at times, partly because of the forceful way it's played in conjunction with its quick tempo.  Toward the end there is a drum solo, heavily favoring the snare, and with some interesting chops.

The second bonus track is "'Round Midnight," probably Monk's most famous composition, which he co-wrote with Cootie Williams and Bernie Hanighen.  This is a wonderful rendition.

The final bonus track is a medley of "Bye-Ya" and "Epistrophy."  Art Blakey plays drums on this track, and there is a great drum solo.  By the way, according to my trusty dictionary, "epistrophy" means "in botany, a return to or toward a normal state from an abnormal."  Hmmm.

Thelonious Monk Quartet, at the time of this recording, was Thelonious Monk on piano, Johnny Griffin on tenor saxophone, Ahmed Abdul-Malik on bass, and Roy Haynes on drums.  Art Blakey plays drums on the final track.

This special re-issue of Misterioso is scheduled to be released on May 15, 2012 as part of the Original Jazz Classics Remasters series.  Also being released that day are The Bill Evans Trio's Moonbeams and Charlie Parker, Dizzy Gillespie, Bud Powerll, Max Roach and Charles Mingus' The Quintet: Jazz At Massey Hall.

Posted by Michael Doherty at 3:21 PM