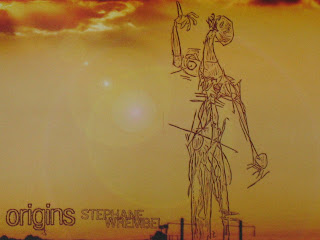 The first track of Stephane Wrembel's new CD, Origins, is really good. The second is impressive.  It was during the third track when I basically lost whatever poise or composure I had, and exclaimed aloud, repeatedly and to myself and to the music, "Holy moly!"  Basically, my head exploded.

Somewhere in the eighth song I'd left my body completely, making writing a rather difficult endeavor - if I had any thoughts I could express anyway.

You know how they say it's really difficult to think without words.  I have found that to be true.  Whenever I think, my thoughts take the form of words.  But the music on this disc obliterates thought (in a most joyous way).  Or creates a whole new realm of thought, where words aren't necessary, where they're alien and crude.  Obviously, there are no lyrics, so the music isn't expressed in words.  But it has an effect on the listener, making words unnecessary for him or her too.  It's like communication on a more pure level.  Of course, here I am, writing about it, putting it into words.  Sorry.

I know a lot of people are aware of Stephane Wrembel because of his performance during the Academy Awards. I didn't watch the Oscars (I couldn't be less interested in awards shows), but I did see Midnight In Paris, and loved it.  It was one of my favorite films from last year, and the music was wonderful.  The theme that Stephane Wrembel wrote for that film is included on this disc (it's titled "Bistro Fada," and is the seventh track).  Woody Allen used Wrembel's music before - his song "Big Brother" is featured in Vicky Cristina Barcelona.

At times, Stephane Wrembel's playing reminds me a bit of Javier Mas (who recently toured with Leonard Cohen). He's in that same realm, with the same mastery and ecstasy in his playing. The other musicians on this album are all excellent as well, and there are times when I was blown away by Nick Anderson's jazz drumming. My only criticism or complaint is this: I could do without the laughter at the end of "The Selfish Gene." It felt intrusive, and somehow broke the spell (if only momentarily).

Musicians on this album include Stephane Wrembel on acoustic guitar and 12-string guitar, Koran Hasanagic on rhythm guitar, Dave Speranza on acoustic bass, David Langlois on washboard and percussion, and Nick Anderson on drums.

Posted by Michael Doherty at 4:54 PM