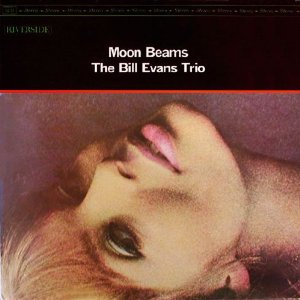 Moonbeams is an album of slower tunes recorded in May and June of 1962.

There is something so clear and perfect in Bill Evans' playing, in his style. Yet at the same time these recordings have a loose, introspective feel. There is a certain spontaneity to even the slowest of songs that makes them  lively. His playing is never dull, no matter the tempo.

This special re-issue includes three bonus tracks, all of which were previously unreleased.

"Re-Person I Knew" begins as a late-night soft tune, like at a club after it's closed, with a piano player who is reluctant to go home.  But when the other musicians come in, it changes. It has a sometimes-uneven rhythm that catches you off guard at times, with its odd starts. And then it features a nice, soft section with the bass taking lead.  This was Bill Evans' new bass player, Chuck Israels, who joined The Bill Evans Trio after the death of Scott LaFaro.

"Re: Person I Knew" was written by Bill Evans.  Interestingly, its title is an anagram of the sessions' producer, Orrin Keepnews.

Bill Evans has such a light touch, feeling his way through the beginning of "Polka Dots And Moonbeams." And then a couple of minutes in, his playing becomes brighter. You can sense his changing emotions - it's all there in his playing. There is nothing hidden.  And at times, there is a certain sweetness to this recording.

A slightly shorter take of this song is included in the bonus tracks.  It features some playful, joyful work by Bill Evans, as well as the other two musicians who follow him.

"Polka Dots And Moonbeams" was written by Johnny Burke and Jimmy Van Heusen.

"I Fall In Love Too Easily"

"I Fall In Love Too Easily" features very light, sparse playing by drummer Paul Motian. And Chuck Israels' bass is mostly in background. This track is mainly Bill Evans, who seems to have mixed feelings about falling in love so easily.  At first, it seems like maybe he's alone and lonely (as if his love went unrequited), but toward the end, it seems things are turning around.

An alternate take is included in the bonus tracks.  "I Fall In Love Too Easily" was written by Jule Styne and Sammy Cahn, and was featured in the 1945 film Anchors Away.  It was nominated for an Academy Award, but lost to "It Might As Well Be Spring," a song which, interestingly, The Bill Evans Trio also covers on this album.

"In Love In Vain"

This CD includes a really good, mellow, slow rendition of "In Love In Vain," a song written by Jerome Kern and Leo Robin

The original album concluded with "Very Early," a song composed by Bill Evans.  It's one of the brightest tracks on this release, feeling lighter.  And it features probably the most interesting work on bass by Chuck Israels on this disc.  At moments, he's playing alongside Bill Evans rather than under him.

A shorter version of this song is included in the bonus tracks.  It's a truly pretty rendition at the start, and has the same bright energy as the other, earlier take.

The Bill Evans Trio, at the time of these recordings, was Bill Evans on piano, Chuck Israels on bass, and Paul Motian on drums.

This special re-issue is scheduled to be released on May 15, 2012 as part of the Original Jazz Classics Remasters series.  Also being released that day are Thelonious Monk's Misterioso and Charlie Parker, Dizzy Gillespie, Bud Powerll, Max Roach and Charles Mingus' The Quintet: Jazz At Massey Hall.
Posted by Michael Doherty at 3:31 PM