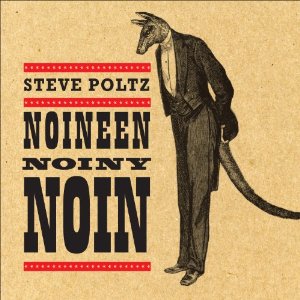 Noineen Noiny Noin is Steve Poltz's thirteenth full-length album, and yet somehow he's new to me.  This CD jumped right on top of me from its fantastic start.  One thing that hit me was the album's humor. It seems like Steve Poltz has a bit of a twisted outlook (which I always appreciate), but then he can surprise you with "I Pray It Never Comes To This," which is a sweeter folk tune (his voice is beautiful on that one).  And then on a track like "Check Your Head," the vocals are up in the higher registers, something like Mick Jagger doing "Fool To Cry" (and yes, that tune has a definite 1970s feel).  Sometimes I'm not exactly sure where he's coming from, and I like that.  This album continually surprised me, and there are lots of different vibes to these tunes, and a mix of genres. It boasts excellent songwriting, and an interesting delivery.  There's really only one tune on this CD that doesn't work for me.  The rest of the album is so good.

The first track, "Spirit Hands," begins with a brief instrumental intro (which reminds me of backwards Beatles stuff), then kicks in like an energetic bit of folk pop. The first lines are, "Lay me down in a field of daisies/Let me dance in a room full of crazies/I was lost, but now I'm found again/Won't you run away with me around the bend." It soon becomes, "I was found, but now I'm lost again," and then the song suddenly changes, reaching a different level, becoming a rock song. While the transition might be jarring, it totally works. The song shifts levels throughout, and it's a joy to go along with each change.  Steve Poltz has a great voice for folk (that blend of wisdom, humanity, and humor), and then is able to belt it out for the hard rock sections.  "Spirit Hands" is a great opener, immediately pulling me in (and setting my expectations rather high for the rest of the album).

"Croatia" reminds me a bit of early Cracker material. It's that fun kind of loose country rock - of course, in this case the country is Croatia. But no matter. There is a definite sense of humor to this (and most of the album's tune), complete with stutter ("takes its t-t-t-toll").  The chorus is, "Croatia, I'm going to miss you/Like a bottle of wine, I'll put my lips against you/Hold on tight, it's a roller coaster ride/From Dubrovnik to Split, it's gonna be all right."   I love these lines: "I'm trying to play quiet, but I end up loud/Throw some money in my case, I ain't too proud." Jason Brown plays French horn and trumpet on this track.

"Slovenia Breeze" reminds me a bit of Uncle Tupelo. It's a slow, easy-going tune, with some really nice vocals.  Here is a bit of the lyrics: "Let the wind blow back your hair/Where this train goes, I don't care/I feel like I'm hypnotized/Maybe I just realized/This moment I could freeze/In the Slovenia breeze." But my favorite line is, "Broken English can't be wrong when it's mixed in with a song."

"Conversations With The Moon"

"Conversations With The Moon" is a quiet acoustic number with the vocals much more prominent than on other tracks, like he's right next to you.  And so there is a wonderful intimacy.  This one is also truly pretty.  It's about being on tour in England, across the ocean from the person he misses, and afraid to cross the street because he doesn't trust the way people are driving. I like the lyrics about the differences in language: "There's a bonnet on my car/And a torch for when it's dark/But a heart is still a heart/Yours and mine are far apart."  This is one of my favorite tracks.

In "Giving Thanks," we can forgive him for the no-longer-clever God-is-a-woman bit, especially because he follows it with the line, "But if I'm a believer, it's usually when I'm in need."  But the lyrics I really dig are these: "I'd like to stick around with brand new eyes/I got good friends/They're like family to me/I got good family - they're like strange, weird friends to me/But I guess I'm thankful for all the people I meet." What I love is that this song is kind of humorous, yet feels earnest. The lines are sung without any sarcasm or irony in his voice.

"Ordinary Dude" is one of my favorite tracks.  Right away I'm in love with this tune, because of the violin at the beginning.  And the energy is fantastic. This song features great vocals (like a bizarre combination of an Irish folk tune, a CSN song, a march, and... hell, I don't know what).  I like these lines: "If I get picked up by the coppers, I'll tell them I ain't in the mood/Go find another criminal 'cause I'm just an ordinary dude."  If ever I find myself in that situation, I think I will use those lines.

"Trash" is a slow song, sung from the perspective of the man who gets shot in Johnny Cash's "Folsom Prison Blues."  He tells a different sort of story than the way Cash sings it.  He creates himself as a transvestite who is getting ready to go out and will be dead before the end of the night. He sings, "I might be for sale, but I ain't no whore" and "Oh, the things we do looking for love." It's a serious and personal song, and it's only slowly revealed that the man the transvestite hooks up with is Johnny Cash.  The first hint is the line, "He was standing in the corner all dressed in black."

When the man has come, he then turns on the transvestite, his own feelings of self-loathing being the reason for the shooting.  At least, that's the way it's told in this rendition of the story.

"Sucker Punch" is foot-stomping aggressive country rock, and it's a bit silly, with lines like "She had me for dinner/I stayed on 'til lunch." This turns out to be another song about a transvestite, but this one from the perspective of the man who finds himself dating her. The Kinks did it better in "Lola."  "Sucker Punch" is not all that clever or original. This is the one tune that doesn't work for me.

"Some Things About Me You Should Know"

The first CD concludes with "Some Things About Me You Should Know," which is a strange list song. It's like a profile on an online dating site, but aggressive ("You should fucking know these things about me").  How personal is this?  I have no idea.  Is he revealing anything about himself, or just making jokes? He says, "I use humor as a crutch."  So who knows?  I like this: "I quit drinking booze/That's not any big news."

(Note: I got a message from Steve Poltz, and every word in the song is true.  He says it's the most personal song he's written.)

There is a second CD included in this package, that contains approximately twenty-three minutes of music.  The first song, "Killin' Myself To Be With You," is a slightly goofy, but also sweet love song. He finds himself falling out of a tree, sinking to the bottom of the ocean, falling down a mine shaft - "No matter what I do, I'm killing myself to be with you."

"Salt Suit" is an odd folk song, with a spoken word delivery during the verses. It's about a man who was not able to cry, not even when watching The Notebook.  But then he couldn't stop crying, and his suit became caked with salt (thus, the title). This song is more than a bit silly too.  The line about kicking the dying man with the cute puppy makes me laugh each time (Maybe there's something wrong with me).

"From The Top Of Her Head" is a sweet, pretty song, that features violin. This is my favorite from the bonus CD.

Noineen Noiny Noin is scheduled to be released June 19, 2012 on Arrival Records.
Posted by Michael Doherty at 5:39 PM