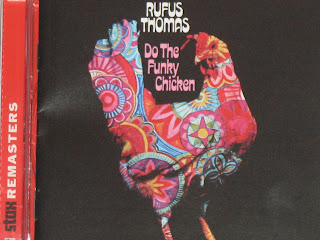 Concord Music Group is continuing its series of Stax Remasters with this wonderfully silly and seriously funky album by Rufus Thomas. How many of you can do the funky chicken? Well, all of you can once you've listened to this CD a few times.

"Do The Funky Chicken"

"Do The Funky Chicken" seriously begins with Rufus Thomas imitating a chicken and then a rooster. And why not? Then he sings, "I got something I want to show you." It sounds a bit dirty, but he's actually talking about a new dance. This song is joyously ridiculous, but also actually a darn good dance song. And the line "This is the kind of stuff to make you feel like you want to do something nasty like wear some chicken gravy on your white shirt right down front" makes this an early sploshing favorite.

This song was released as a single and actually was a hit - clearly at a time when this country had a sense of humor. It reached #28 on the Billboard Hot 100, and #5 on the R&B chart.

The universe makes little sense, and everything is fairly chaotic. But one thing we can count on is that a song titled "Let The Good Times Roll" (or any variation thereof) is going to be a good tune. I've heard a whole lot of songs with that title (by people like Sam Cooke, Dr. John, Shirley And Lee, The Cars, etc.) and they're all wonderful. And this one written by Louis Jordan and done by Rufus Thomas is some great funky fun. Turn it up, and get ready to dance. The instrumental section features some phenomenal work on both bass and guitar. This song is delicious. Sink your teeth into its thighs.

"Sixty Minute Man" is a weird combination of a slow bluesy drive and some frantic scat, with the repeated line, "I feel my body." This song can hypnotize you. It will take its time with you too. At 7:18, it's a nice long gem. A shorter version of this song was released as a single with "The Preacher And The Bear."

"Sixty Minute Man" was written by William Ward, and originally done by The Dominoes in 1951.

"Lookin' For A Love"

Another cool cover, "Lookin' For A Love" will shake you out of the voodoo fever of the previous track, and bring you more into a 1960s party groove (more along the lines of Sam Cooke or Otis Redding). Total fun. The Valentinos did this song originally, but I remember grooving to J. Geil's Band's version when I was a kid. "Lookin' For A Love" was written by J. W. Alexander and Zelda Samuels.

More animal sounds begin "Bear Cat (AKA Hound Dog)." This song is "Hound Dog," but with other lyrics. Rufus sings, "You ain't nothing but a bear cat" (no, I'm not kidding). And check out those odd backing vocals.

"Old McDonald Had A Farm"

Continuing his animal theme, Rufus next tackles "Old McDonald Had A Farm." More than six minutes of "Old McDonald Had A Farm," and divided into two parts? I'm way too sober for this. But for parents, this is the version to play for your children. Or rather, these are the versions. For the first track is a gospel rendition. Give 'em some soul early on, and they'll turn out okay. Maybe give 'em just a bit of whiskey too. The second part - that is, Part 2 - is a full, funky version.

Oh yes, "Soul Food" begins with a nice slow groove with Willie Hall on drums, and Rufus hollering to a waitress who hasn't taken his order. This song is one of those list-songs, but it's a good one. And that's Isaac Hayes on the keys (long before he went sideways and joined a cult). There's quite a bit of joking around on this track.

"Turn Your Damper Down"

Holy moly, "Turn Your Damper Down" is some serious fun. I love Rufus Thomas's vocals on this one. This is probably my favorite track on the CD. It is lively and wonderful, with a great groove.

"The Preacher And The Bear"

The original album ended with "The Preacher And The Bear." So yes, back to his fondness for animals. It's a fun, silly song, and was released as a single in 1970. That's Wayne Jackson on trumpet and Andrew Love on sax.

This special re-issue has eight bonus tracks, all of which had previously been released as singles.

"Funky Mississippi" starts with him saying, "Now everybody's talking about funky Broadway and everybody's talking about funky Philadelphia. But I want to tell you about my hometown." Written by Eddie Floyd and released as a single in 1968, this song has a great groove. Booker T. & The MGs back him on this one. "So Hard To Get Along With" was the flip side to "Funky Mississippi."

"Funky Way" is certainly funky and groovy and mean with some cool backing vocals. "Ain't that a funky way to treat somebody?" Indeed. Booker T. & The MGs backed him on this single as well. And that's Isaac Hayes on organ (back when he was cool, before he joined the L. Ron worshipers and traded his soul for an e-meter). "I Want To Hold You" was that single's flip side, and the Memphis Horns are particularly good on it.

"Itch And Scratch" is a dance tune that was released as a single in 1972. Despite him listing the places where they're doing this dance, I'd never heard of it before. Then again, he didn't list Boston as one of the places. He sings, "I got to scratch." Okay then. This song didn't necessarily need a second part. Whereas the second part of "Old McDonald" was essentially a different take on the whole thing, this Part 2 just seems like a continuation - like the song was intended to be six minutes long, but was cut into two sections.

"Boogie Ain't Nuttin' (But Gettin' Down)" is another dance song, this one released as a single in 1974. It features some good work by the South Memphis Horns. The "Part 2" is unnecessary and annoyingly repetitive.

This special re-issue of Do The Funky Chicken is scheduled to be released on September 13, 2011 through Concord Music Group as part of their Stax Remasters series. Other titles to be released that day include Shirley Brown: Woman To Woman and The Dramatics: Whatcha See Is Whatcha Get.