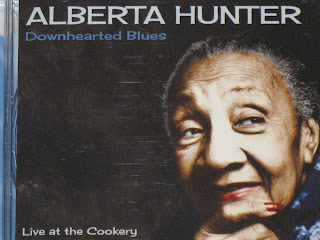 Alberta Hunter is The Blues. She started recording in the early 1920s, six decades before these tracks were recorded. The history that's wrapped up in this one woman is incredible. And you can hear it on this recording. Like she says in the introduction to "Time Waits For No One," "This is the voice of experience." Indeed. And what a voice. And with a sense of humor. She had me laughing through most of "Two-Fisted Double-Jointed Rough And Ready Man," for example. And during "Sometimes I'm Happy."

These tracks were recorded in 1981. That's shocking. After all, this was the beginning of the reign of that feeble actor and all-around bastard Ronald Reagan. But you wouldn't know it listening to this album. It could be 1928, 1937 or 1946. Certainly it doesn't sound like the era of Pac-Man and MTV.

Alberta was in her eighties. And you wouldn't know that either. This ol' gal is seriously rocking on the disc's opening track, "My Castle's Rockin'. "Don't worry about a thing," she tells us. After all, she's paying the cops for protection. From whom? Themselves, most likely. But no matter, inside things are swell, things are swinging. Her joint is jumpin' just as she says.

"The Love I Have For You"

Alberta introduced "The Love I Have For You" as a song she wrote for Robert Altman's picture, Remember My Name. I'm a huge Robert Altman fan, but this is one I've never seen, or heard of. But as it turns out, she got it a bit wrong. It was Alan Rudolph who wrote and directed it, not Robert Altman.

Alberta gives a little laugh before starting this sexy, beautiful tune. She sings, "The love I have for you/Is a thing set apart/You can search and search again/From end to end/Through and through/You'll never find a love like the love I have for you." This song also features some really nice work on piano.

In introducing "Remember My Name," she says, "This is another song I wrote for Robert Altman's picture."

She gets the audience clapping along with this familiar song. Sure, her version is a bit messy. But it's also damn fun, and really, "Who could ask for anything more?"

In introducing "Downhearted Blues," Alberta said she wrote it in 1923 "before most of you were born," which gets a laugh. She talks about how Bessie Smith recorded it and Alberta was still collecting royalties as a result.

Alberta has a great rapport with the crowd. And I wonder just how aware they were that they were watching a legend. It seems like her charm and ease made them feel right at home, and maybe lessened any reverence or awe they might have felt. I love her somewhat soft "ooo"s on this one.

"I'm Having A Good Time"

A live-in-the-moment song from a woman in her eighties carries a heck of a lot more weight than one sung by a teenager. In "I'm Having A Good Time," Alberta sings, "Let me have my fun/I've got to have my fling...because tomorrow I may die."

"You Can't Tell The Difference After Dark"

"You Can't Tell The Difference After Dark" is an amusing song about skin color making no difference in the sack. I had never heard this tune before. It's seriously funny. "They say that gentlemen prefer blond-haired ladies/You must be out of your mind if you think I'm out of style/Just because I'm a little bit shady."

"Georgia On My Mind"

I've heard a ton of versions of this song over the years. And I have to say I absolutely love Alberta Hunter's rendition. Her voice works so well in conjunction with Jimmy Lewis on bass. And then Gerald Cook is doing what is essentially a separate lead section on piano. And somehow it all works magically.

"Handy Man" is a sexy song full of euphemisms. Alberta sings about how her handy man "churns my butter," "threads my needle" and "chops my meat." But this one kind of blew me away: "Sometimes he's up way before dawn, busy cleaning the rough edges of my lawn." And then for those who might have missed it, she adds a bit about "the way he handles my front yard." Alberta's voice is hot and sensuous.


The musicians playing with her on this recording are Gerald Cook on piano and Jimmy Lewis on bass.

Downhearted Blues: Live At The Cookery was released on August 30, 2011 through Rock Beat Records.

By the way, you know what term we don't hear much anymore? Jellyroll. Why is that? And how hot is it to hear a woman in her mid-eighties sing it? I love it.

Posted by Michael Doherty at 3:37 AM