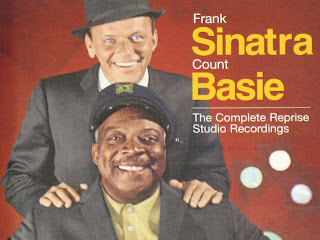 The Complete Reprise Studio Recordings contains two full records - Sinantra-Basie: An Historic Musical First (1962) and It Might As Well Be Swing (1964). This is that great big band sound and atmosphere where Sinatra really thrives. He's able to shine because he seems able to relax. There is a lot of playfulness in these recordings. Listen especially to the way Sinatra sings his final lines to each of the songs. He constantly makes it clear, his mood, his cheerfulness. Listen to him sing, "Hot damn, I wish you love!"

Keep in mind also, that Reprise was Sinatra's own label, which he started in 1960. His first album on his new label, Ring-A-Ding Ding!, was released in 1961. So this period, 1962 - 1964, when these recordings were made, was an important time for him.

It was also an interesting time for Count Basie. He had just played with Duke Ellington, resulting in the record First Time! The Count Meets The Duke (1961). On that record, the two orchestras were combined. The band on The Complete Reprise Studio Recordings is The Count Basie Orchestra.

"Pennies From Heaven" starts with Count Basie on piano - just some quick, light touches - before Sinatra and the rest of the band come in. Frank Sinatra is clearly having a good time with this recording. He sounds relaxed. It's like he knows he doesn't have to take charge here. The band is top-notch. Frank can just sing, and let the band do its thing.

"Please Be Kind" has a sort of cool, easy groove. I like the way Sinatra stretches out the word "Well" in the song's opening lines, "Well, this is my first affair/Please be kind/Handle my heart with care/Please be kind." I love the band's punctuation of the title line when it comes around again approximately a minute and a half in. "Please Be Kind" was written by Saul Chaplin and Sammy Cahn.

"(Love Is) The Tender Trap"

"(Love Is) The Tender Trap" is one of the CD's coolest tracks. It feels like more than simply a song. It feels like an entire show, the way each instrument has a distinct role, with something to say. I love the faux stutter of Sinatra on "Ssssome starry night when her kisses make you tingle." And the way it ends is wonderful, the way Frank sings, "And I'm trapped with you."

"(Love Is) The Tender Trap" was written by Sammy Cahn and Jimmy Van Heusen.

"Looking At The World Thru Rose Colored Glasses"

"My Kind Of Girl"

"My Kind Of Girl" begins with great groove. Count Basie really comes across as a leader on this one. And not just the piano, but the bass and drums are brought to the fore for this tune. I love what Buddy Catlett does on bass and what Sonny Payne does on drums. This song also features a delightful solo on flute by Frank Wess.

This song really has a great playful quality, and it's one of my favorites. Here is a taste of the lyrics: "And her hair has a kind of curl/To my mind, she's my kind of girl/She's wise like an angel's wise/With eyes like an angel's eyes." The way Sinatra delivers the song's last line, "And I'm glad," caught me totally by surprise, and made me laugh out loud. And then Count Basie gives us his final thoughts on the matter on piano.

"My Kind Of Girl' was written by Leslie Bricusse.

"I'm Gonna Sit Right Down And Write Myself A Letter"

"I'm Gonna Sit Right Down And Write Myself A Letter" is another fast-paced tune, but with a different feel from "Looking At The World Thru Rose Colored Glasses." This one features great pauses as well as magical bursts of horn, and some great work on bass by Buddy Catlett. And there is a short and surprising section with Sinatra singing over Sonny Payne's fantastic work on drums.

Frank Sinatra had released a version of this song on his 1954 record, Swing Easy!

The first album concludes with a more relaxed pace with "I Won't Dance." It's like each instrument gets a turn to act in a duet with Sinatra. This song includes one of the oddest rhymes I've heard: "Heaven rest us, I'm not asbestos."

"Fly Me To The Moon (In Other Words)"

It Might As Well Be Swing begins with the beloved tune "Fly Me To The Moon." And what a great version. It begins with just a bit of drums, and a couple quick notes on piano before Sinatra comes in - along with guitar and bass. It has an understated beginning, which is wonderful and which leaves a lot of room for the band to go, to fill. And of course the song builds from there, with the horns.

Quincy Jones was the arranger and conductor on It Might As Well Be Swing.

"More" is an interesting one. This song began as an instrumental, as the theme to Mondo Cane (1962). (If you haven't seen Mondo Cane and its sequels, I highly recommend you check them out.) Lyrics were added later. It's a pretty song, a love song with lines like "I only live to love you more each day/More than you'll ever know/My arms long to hold you so." And it ends with the line, "No one else could love you more." Oddly, though Sinatra does some wonderful things with this tune, I especially love the instrumental section.

"I Can't Stop Loving You"

As surprising as the Mondo Cane theme was, they follow it up with "I Can't Stop Loving You." Yes, that famous country tune. They make it work, with horns over a typical wandering-on-the-range-on-a-horse type beat. Ray Charles had a big hit with it two years earlier, proving the song could be safely removed from the country realm and still succeed. That version by Ray Charles reached #1 on the Billboard Hot 100.

"I Can't Stop Loving You" was written by Don Gibson, who first released it in 1958. Roy Orbison also released a version in 1961.

In their version of "Hello, Dolly!" Frank Sinatra changes the lyrics to "Louis" toward the end, showing his love and admiration for Louis Armstrong. He sings, "You're back on top, Louis/Never stop, Louis/You're still singing, you're still swinging, you're still going strong." Count Basie is phenomenal on piano at that point, and the whole song jumps and swings at the end.

Frank Sinatra would record this song again for his 1965 release, My Kind Of Broadway.

"The Best Is Yet To Come"

"The Best Is Yet To Come" is a song Sinatra is known for (though Tony Bennett got to it first). Count Basie starts this version, and his intro is perfect. And of course Sinatra has a great time with this one. My favorite moment is when the horns suddenly drop out nearly two and a half minutes in, and it's just the low-key groove with Frank's vocals.

"The Best Is Yet To Come" was written by Cy Coleman and Carolyn Leigh, and apparently it was the last song Frank Sinatra ever sang in public.

The Complete Reprise Studio Recordings was released on September 6, 2011 through Concord Music Group.
Posted by Michael Doherty at 7:22 PM