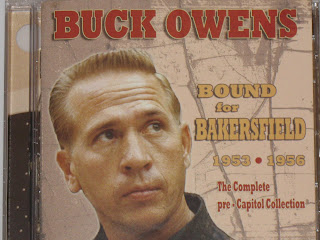 Bound For Bakersfield is a collection of Buck Owens' earliest recordings on small labels. This is back when country really was the music of the people, when it was real and not simply a hat one put on. These are also recordings from before Buck Owens was famous. In fact, the tracks here were not in any way hits. You may not have even heard these songs before. They're quite a bit removed from the Buck Owens material that everyone knows - stuff like "Act Naturally."

These are short songs. This CD has twenty-four tracks, and the total length is just under 50 minutes. The songs are in the general order that they were recorded, so they start in 1953 and end in 1956. The majority of these recordings are from those two years, with just a few songs from 1955 (the year rock and roll really started to take off - and you can hear its influence on those tracks).

This CD contains a large number of alternate takes. Sometimes with alternate takes, the differences are negligible. But on this disc, there are significant differences between the two takes. The alternate takes are paired with the originally released versions, rather than placed at the end of the disc. An interesting choice, but one that music connoisseurs will appreciate, for it's easier to compare the different versions. (Usually what I've done is program my CD player to do just that when a disc has an alternate take of a song.) The exception is "Blue Love."

"Blue Love," the first track, begins with approximately forty seconds of conversation in the studio before recording. "Run a little piano, and run a little trumpet and a little bit of everything, but don't run too much of one thing. And make it short. And come right back into the vocal." Those lines lead into the first song. Perhaps an odd way to begin the disc, but the energy and speed and authority with which he delivers those lines set the tone, and give us an idea of the mentality and disposition of the man whose songs these are.

Sure, the sound quality is not always perfect, but these songs are so damned cool. And wouldn't a pristine recording take away from some of the honesty and charm of these tracks? By the way, I love the parlour-house feel of the piano on "Blue Love."

The second version of "Blue Love" included on this disc is from 1956, three years later, and so is placed later on the CD, making it the only song on the CD whose two versions are separated. That version is extremely short, fading out quickly after the line "My life was only meant for misery." The piano is more subdued in this version.

"Blue Love" is this CD's only cover song. It was written by Melba Rocha.

"Down On The Corner Of Love"

Listen to the wild, unrestrained quality in Buck's voice on the lines, "Well, it's late in the evening/That I can't help but feeling/That my heart you're a-stealing/Underneath the stars up above." It's that very part that makes me love the song, and this rendition. It's one of my favorite moments on the entire disc.

In the official take, the other instruments mask that strain a bit. And of course the whole thing is more polished and bright - but still wonderful. I particularly like the short instrumental sections - guitar, then just a touch of piano, then fiddle. This version was released as a single.

That instrumental bit is repeated very closely on the official take of "The House Down The Block."

"Right After The Dance"

"Right After The Dance" has the energy of a rock and roll tune, particularly in the vocals. In this one, Buck sings about making love right after the dance, after wooing the girl with a song by the river. It's the shortest track on the album, at just over a minute in length.

The second version somehow feels more relaxed, not as urgent. Like in this version, it sounds like he's already made love to her. In the first, he sounds like a virgin eager to get to it. I prefer the first, though the second is twice its length.

In the second version, once again there is that guitar-piano-fiddle section that seems to be in a lot of these songs.

This CD takes a jump with "Hot Dog," which is rockabilly. The song is clearly influenced by the early rock and rollers, particularly Elvis Presley. It's a song about his baby who works in a hot dog stand. It has that wonderful innocence mixed with a bit of sexual excitement that marked a lot of the tunes of that time. I love the way Buck Owens sings this one - he really sells it. It's not like a country artist performing a song that is outside his realm and ability. Buck seems perfectly at home in this genre.

Buck Owens released "Hot Dog" as a single, but under the name Corky Jones. This was because of his belief that the hardcore country people in Bakersfield would have turned against him had they known he was dipping into rockabilly.

"Hot Dog" was written by Buck Owens and Danny Dedmon.

"Rhythm And Booze" is another song influenced heavily by early rock and roll. It even (like so many songs) has a reference to "Blue Suede Shoes": "Well, I'll give up my dancing/And I'll give up booze/If you'll come home I'll even throw away my blue suede shoes." Music and alcohol are to be blamed for everything that's gone wrong. He lost his girl. He even lost his Cadillac. Things can be tough. This song features some nice work on guitar, particularly during the instrumental section.

"There Goes My Love"

"There Goes My Love" is one of my favorites from this release. It's a love song about a love lost, and the possibility that that's it for him. He sings, "Well, you're the first love of my life/And you might be my last/I don't want to be just another boy in your past."

"Honeysuckle" is a cool instrumental with a great groove. This track is probably the most fun tune of the entire CD. It's just so enjoyable. It is the only instrumental track on this release.

"Please Don't Take Her From Me"

"Please Don't Take Her From Me" is a sad waltz (which of course is the best kind of waltz). He pleads with another man not to take his woman from him. Here is a bit of the lyrics: "A quarrel we had, and thus it began/I don't suppose you'd understand/I don't, she don't want to be free/Please don't take her from me/I know by your kind what's on your mind/So don't wink your eye/Just let her pass by/She'll come back to me, and happy we'll be."

The CD concludes with "I'm Gonna Blow," which sounds quite a bit different from everything that's come before it. This song has something of a New Orleans feel. Think Fats Domino. I love the way Buck Owens belts it out. And that steady rhythm is just perfect. This is one of my favorite tracks.

Bound For Bakersfield 1953 - 1956: The Complete Pre-Capitol Collection is scheduled to be released on September 27, 2011 on Rock Beat Records.
Posted by Michael Doherty at 9:21 PM