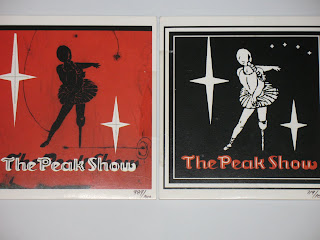 The two holidays with the best music are St. Patrick's Day and Halloween. St. Patrick's Day is number one, of course, with all that great Irish music. But there is a large amount of wonderful songs for Halloween. A lot of them are known to everyone, like "Monster Mash" and "Werewolves Of London." But there are plenty of other Halloween-related tunes that not everyone is familiar with. Here are a few of them...

The Peak Show was one of the best bands ever in the history of music. They released one song that is perfect for Halloween. It's called "Cemetery Boys" and it was released on their CD titled (appropriately enough) The Halloween EP. This CD was released with both red and black covers, in limited editions. Members of the band - guitarist Derock Goodwin, drummer Gabriel "Front Row" Rowland and bassist Alex Painter - are all mentioned by name in this song. There was actually an earlier version of this song titled "Cemetery Girls," but it was never released.
Unfortunately, The Peak Show broke up in 2004. But the band members all have their own individual projects. Lead singer Holland Greco recently released an EP titled Tunnel Vision. Gabe Rowland's current project, Bullied By Strings, has moved from Los Angeles to Chicago.

Cherry Poppin' Daddies And The Cramps

The Cherry Poppin' Daddies are a seriously fun band, combining swing and some serious rock. "Teenage Brainsurgeon" fits more in the latter category, though there is still some great work from the horn section.

Here is a taste of the lyrics: "I am the teenage brainsurgeon/The butcher of hellhouse/Descend into the maelstrom/With the grinning Dr. Klaus/Uncle Creepy and the giant pink hand/Imp of the perverse/Feel the wrath of the scorpion/Dead bodies crawlin' out of the dirt."

"Teenage Brainsurgeon" was released on The Cherry Poppin' Daddies album Ferociously Stoned (which came out in 1990 - not 1995, as certain websites would have people believe).

While on the teenage theme, there is also "I Was A Teenage Werewolf" by The Cramps. Certainly a lot of songs by The Cramps are suitable for Halloween (perhaps all of them). But "I Was A Teenage Werewolf" is particularly delicious - a different take on teenage angst (but hey, wasn't that what all of those 1950s teenage horror films were about?). Here is a bit of the lyrics: "A Midwest monster/Of the highest grade/All my teachers thought/It was growing pains, oh no no/Somebody stop this pain."

"I Was A Teenage Werewolf" was originally released on The Cramps album Songs The Lord Taught Us (1990).

There is a song that plays over the closing credits to Eight Legged Freaks that is seriously cool. It's a strange and twisted version of "Itsy Bitsy Spider," and it's by Joey Deluxe. Here is a bit of the lyrics: "Itsy bitsy spider crawled into mama's bed/Crawled up on her hubby and bit him in the head/Mama laid there sleepin' while hubby laid there dead/And the ittsy bitsy spider crawled out of mama's bed."

Ann Magnuson is one of the coolest chicks on the planet. No one can dispute that. And she recorded one of the best Halloween songs. It's called "Sex With The Devil," and it's on her 1995 release, The Luv Show. This song is funny and, yes, sexy, as Ann sings, "I'm about to come/When the devil wants his fun/Because I'm a tart/He plunges his pitchfork through my heart." Ann even does an impression of Ethel Merman in this song. (By the way, in the liner notes is an incredibly sexy photo of Ann with her own pitchfork.)

For those unfamiliar with Ann Magnuson, she was in the great band Bongwater. She is also an accomplished actor, and has had roles in films like Making Mr. Right, Panic Room and The United States Of Leland. And for horror fans, check out The Hunger. She plays Young Woman From Disco.

"The Vampires Of New York"

Marcy Playground became popular because of the song "Sex And Candy" from their self-titled album released in 1997. But there are a lot of better songs from that release, including the last track, "The Vampires Of New York." Here is a bit of the lyrics: "Come see the vampires of New York/Come lose your mind in Central Park/But don't leave your soul behind/Come take in 8th street after dark/Such peculiar people you'll remark/You might even see a murder."

"My Son, The Vampire"

"My Son, The Vampire" is one of the funniest songs about vampires. And it probably comes as no surprise, as it was written by Allan Sherman, who is famous for his parodies. In this song, he sings, "My son, the vampire/He will leave you pale/All he does is drink your blood/'Cause he don't like ginger ale."