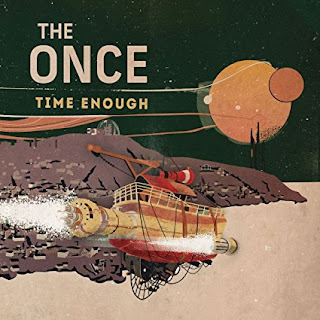 The Once is a trio based in St. John’s, Newfoundland, mixing folk and pop sounds and known for beautiful harmonies. Time Enough, the band’s new release, is its fourth full-length album, and features original material. With one exception, this album’s tracks were written by the three band members – Geraldine Hollett, Phil Churchill and Andrew Dale. These guys have their own style, their own sound, and the more I listened, the more I came to appreciate and love what they’re doing on this album.

The album opens with “I Can’t Live Without You,” which features some good, laid-back, enjoyable 1970s-type vibes. And their sweet vocals add to the positive, pleasing sound. “I won’t walk away/’Til I hear you say/I’m sorry/We’re one and the same/You don’t have to treat us this way/Let’s bend all the rules/So nobody will lose.” Daniel Ledwell joins them on this song, which was released as the first single from the album. It’s followed by “Before The Fall,” which starts off with a somewhat grittier, more serious sound. It opens with the line, “I lost it all somehow,” which feels almost like the end of a story. But then the second line is in response to it: “Well, what are you going to do now?” Perfect, right? It’s suddenly looked at as a possible beginning rather than ending. There is both a sense of loss and a sense of possibilities. This is an excellent song, using both male and female lead vocals. Its lyrics mention dreams, as does the next song, “Any Other Way,” an energetic tune. “If I lay awake in bed with dreams full of dread/Would you wipe away my fears?” This song has a lot of memorable lines, such as “Would you remember my face/If you could no longer see/If I was alone and lost in the woods/Would you come find me.”

“Lead Me Lover” features some of the most beautiful blending of voices of the album, all over a steady, prominent beat. It’s interesting, as the beat keeps us grounded, but these vocals lift us up. “Lead me, lover/To somewhere you’ve never been/With any other lover.” Oh, yes. I feel like this song itself can lead us into new territory, of tender wonder. Then “Another Morning” begins with the line “Get up, get up, get up now,” something I basically have to tell myself every morning. This track has a gentle folk sound. “Open eyes/September skies/I kissed you back in June.” Something about this song really moves me, and it is more effective each time I listen to it. It is followed by “You Don’t Love Me,” which begins with just vocals and guitar, and builds from there, to include drums and then backing vocals and eventually even saxophone. That’s Ian Sherwood on saxophone, and his presence comes as a delightful and perfect surprise. This track is yet another highlight, and I love the work on percussion. I’m also taken with the way that Geraldine approaches the lyrics, the way she delivers lines like “I’ve tested you enough to see/You’d stoop to bended knee/To prove to you first, then to me/That you love me.”

“We are dying from the moment we are born” is the first line of “Foreign Shore,” a song that features Daniel Ledwell again joining the trio on several instruments. This one has a bit of a 1970s vibe, and has some wonderful lines, like “Moving forward, but always looking back/Seeking all that we are, and all that we lack.” This question of the movement of time and living within memory is also addressed in “We Look Back,” where they sing “We look back/On all of the chances we had.” Riff Jelly plays bass clarinet on both “Foreign Shore” and “We Look Back.” The album then concludes with “Some Lies,” a song written by Tim Baker. It has a pretty, comforting sound, with beautiful vocals. Jenn Grant and Daniel Ledwell provide backing vocals on this track. I don’t mind admitting that this one had me in tears. “I feel you lean against me/In the fire’s heat, in the fire’s heat/You are with me now/I can feel you here somehow/Love, you’re always with me.”