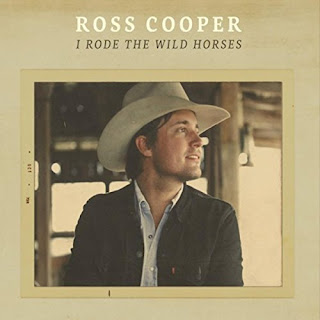 Ross Cooper was actually a professional bareback rider in Texas, so the title of his new album, I Rode The Wild Horses, is no mere fanciful idea or wish. He is the real thing. Of course, that wouldn’t matter much if the music weren’t good. But it is. And no, these aren’t all country songs about the rodeo circuit. Ross Cooper touches upon ideas and experiences and emotions that we all can relate to. I Rode The Wild Horses features all original material, written or co-written by Ross Cooper. Joining Ross on this album are some seriously talented musicians – Eddy Dunlap on pedal steel, Jeremy Fetzer on electric guitar, Nick Bockrath on guitar, Jordan Lehning on piano, Skylar Wilson on piano and organ, Eli Beard on bass, and Tommy Perkinson on drums. Erin Rae, Dean Fields and Eric Masse provide backing vocals. Eric Masse also produced and mixed the album.

The album opens with its title track, “I Rode The Wild Horses,” which has a very cool vibe, a kind of bluesy, haunted country sound. I love Ross Cooper’s vocals. And check out the song’s first lines: “This town, it’s a-changing, but I feel the same/I guess everything’s different but me/The old stomping grounds are all stomped out.” It’s a song that looks back, while taking stock of the present. “And I ain’t got much to show, but I rode the wild horses.” But perhaps my favorite lines are these: “Well, I’m a patchwork of scars/Posted at the bar/’Cause the pain ain’t up and left.” And then there is some surprising work on electric guitar. Plus, there are some nice moments on keys. That’s followed by “Heart Attacks,” which has something of a pop sound in the vocal delivery. It’s a fun tune with a kind of delightful energy and some interesting, unusual touches. “I was a wishful wanderer/Just a-minding my own/With half a mind to stay alone.” This one was written by Ross Cooper and David Borne. These first two tracks are among the album’s best.

Another highlight is “Living’s Hard, Loving’s Easy,” which has an appealing, easygoing folk vibe, and some nice work on acoustic guitar. It’s a song about struggling, but not letting that get the best of you, and has a positive outlook. “We keep working on the next gig to pay for the last/At night, take your classes/And I’ll write the songs/About you taking classes and me writing songs/Two pennies together until more come along.” This song is sweet, pretty, honest. “Living’s hard, harder than they said it would be/Living’s hard, living’s hard, but loving’s easy.” There is a really nice blending of voices. This one makes me feel good. “Another Mile” also has a bright, optimistic feel, which I appreciate, especially in these dark days. “Another mile, another day, boys/I ain’t there yet, but I’ll get it done/Looking for a place that don’t feel out of place/Somewhere I can face the someone I’ve become.”

“Cowboys & Indians” has a cool, darker, somewhat playful and yet dramatic sound, and is about how some folks put on the trappings of an identity. “And everybody wears a big hat now/Shooting off their guns so loud/And everybody just wants to get peace pipe high/Everybody’s living up in the clouds.” That leads him to say directly, “So everyone stop pretending you’re cowboys and Indians.” This one features some good work on guitar. It’s followed by another really good song, “Strangers In A Bar.” Check out these lines: “Taking pride in that no one understands you/And you should come with a warning/You’ll be alone in the morning/You’re fishing for the first of many drinks/Hooking fools on the first of many winks.” There is something both sad and oddly comforting in lines like, “’Cause by ourselves, we might be lonesome/But we don’t have to be alone.” Then “Me Only” comes on strong, with a force. It has a more raw sound, yet is also kind of groovy, and ends up being another of my favorites. “Maybe you’re sleeping, baby, that’s all right/Or you’re laying with him doing things I like.” The CD concludes with “All She Wrote,” about receiving a note from his love. The letter reads, “I don’t feel like I’m leaving, because you can’t leave a man already gone/And you know I tried to love you/So if you ever loved me, let me go.” He is caught off guard by the letter, and tells us “Well, I read it about a thousand times or so.” “All She Wrote” was written by Ross Cooper and Benjy Davis.

CD Track List
I Rode The Wild Horses was released on March 9, 2018. It is available on both CD and vinyl.
Posted by Michael Doherty at 5:22 PM