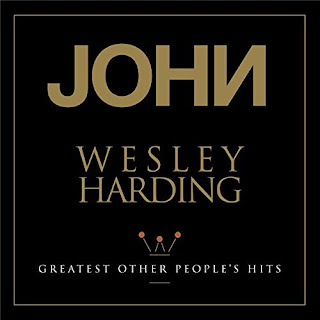 John Wesley Harding (whose real name is Wesley Stace) has been putting out good albums since the late 1980s. Though known for his songwriting, he’s also covered other artists over the years. And on his new release, Greatest Other People’s Hits, he delivers a collection of covers of songs by artists as diverse as Pete Seeger, Lou Reed and Madonna. John Wesley Harding is joined by folks like The Minus Five and Bruce Springsteen on certain tracks. A lot of the tracks on this album were previously released on various compilations and singles. Hey, after all it’s (sort of) a greatest hits compilation. But there are also several previously unreleased tracks. This album was recently released on vinyl on Record Store Day, in a very limited pressing, and will soon be available on CD. The vinyl edition, by the way, does not include the entire album, which is more than hour long; it contains ten of the seventeen tracks.

He opens the album with “If You Have Ghosts,” a song written by Roky Erickson, and included on the 1981 Roky Erickson And The Aliens album, The Evil One. This version by John Wesley Harding was originally included on the 1990 tribute album Where The Pyramid Meets The Eye: A Tribute To Roky Erickson. It has a fun pop vibe. That’s followed by a song from another tribute album, this one a tribute to Pete Seeger titled If I Had A Song…The Songs Of Pete Seeger Vol. 2. The song is “Words Words Words,” the title of course reminding me of Hamlet, that scene between Hamlet and Polonius. This track is performed with The Minus Five, and has quite a different feel from Pete Seeger’s original, this one being much more in the pop realm. By the way, John Wesley Harding also collaborated with The Minus Five on 2009’s Who Was Changed And Who Was Dead.

John Wesley Harding includes two Bruce Springsteen songs on this release. Interestingly, both are from The River. The first is “Jackson Cage,” and this track too was originally included on a tribute album, One Step Up/Two Steps Back: The Songs Of Bruce Springsteen, which was released in 1997. John Wesley Harding’s rendition is more in the folk realm than the original, and features Carrie Bradley on violin, and Chris von Sneidern on bass. It’s a really nice rendition. The second Bruce Springsteen song in this collection is one that actually features Bruce on vocals and acoustic guitar. It is a live version of “Wreck On The Highway” performed at McCabe’s in 1994. John Wesley Harding and Bruce Springsteen are accompanied only by Robert Lloyd on accordion. It must have been something to be at that show! This track was previously included on Awake: The New Edition, which was released in 2000.

One of my favorite tracks is his rendition of “Story Teller,” written by Rainer Ptacek, and originally included on the expanded re-issue of The Inner Flame: A Tribute To Rainer Ptacek, released in 2012. On this track, he plays bouzouki. He is accompanied by Ferdy Doernberg, who plays dobro, lap steel and organ. It’s an excellent song, and one that I don’t think I was familiar with before this release. I love his vocal performance here. Another highlight is the wonderful rendition of “It’s Only Make Believe,” the classic Conway Twitty tune. It’s done as a duet with Kelly Hogan, and Robert Lloyd plays both accordion and mandolin. This was previously released on the compilation Making Singles Drinking Doubles in 2002. And yet another favorite is “Covered Up In Aces.” This song was written by Elizabeth Barraclough, who released it as a single in 1978 (it was also included on her self-titled debut LP). And on this track, she joins John Wesley Harding on both vocals and guitar, the song performed as a duet. It’s a beautiful rendition, somewhat mellower than the original. This track was previously included on The Devil In Me single.

“Old Bourbon,” a song written by Alun Davies, is one of the CD’s previously unreleased tracks. This one features Rick Moody on vocals. (Yes, the guy that wrote The Ice Storm.) It’s followed by another previously unreleased track, a version of The Strawbs’ “Benedictus,” written by David Cousins. On this track, Wesley provides the vocals, and Eric Bazilian plays all the instruments – guitar, bass, keyboard, mandola and drums. Oh, Eric also provides some vocals. Also previously unreleased is John Wesley Harding’s cover of George Harrison’s “Wah Wah.” This track features The Universal Thump, a band that has something of a history performing George Harrison’s music. On the fortieth anniversary of the release of All Things Must Pass, the album that includes “Wah Wah,” they hosted a celebration of that triple album. So it’s the perfect group to collaborate with on this track. (By the way, the article that I read about that concert was written by Rick Moody, just to draw another connection.) And it’s a really good rendition, feeling as full as the original, and does feature a horn section. By the way, the proceeds from this song go to George Harrison’s Material World Foundation.

This collection includes two Lou Reed songs. The first is a sweet version of “Think It Over,” another of the previously unreleased tracks, this one with Scott McCaughey joining him on organ and guitar. The second is “Satellite Of Love,” with Lou Reed himself joining him on vocals and electric guitar. Rob Wasserman plays bass on this track. Wasserman is one of the many excellent musicians we lost in the foul year of 2016, and is someone that is familiar to fans of the Grateful Dead. This track was recorded live in New York in 1994, and was previously included on Fan Club Single #4, released in 1995. This collection concludes with Madonna’s “Like A Prayer,” which John Wesley Harding performs solo.

CD Track List
Greatest Other People’s Hits is scheduled to be released on May 18, 2018 through Omnivore Recordings. By the way, if you are trying to figure out why the CD cover seems familiar, it is a play on the Abba Gold cover.
Posted by Michael Doherty at 9:28 PM