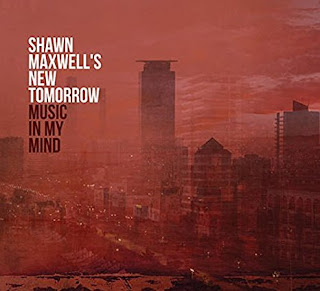 Saxophonist Shawn Maxwell, based in Chicago, has released several albums under his own name, as well as the names Shawn Maxwell Quartet and Shawn Maxwell’s Alliance, and now Shawn Maxwell’s New Tomorrow. The first album under that name was the 2016 self-titled release. That is now being followed by Music In My Mind, featuring all original material, composed by Shawn Maxwell. A couple of these tracks are compositions that Shawn Maxwell included on earlier releases and is revisiting. Shawn Maxwell plays alto saxophone, clarinet and flute on this album. The other musicians include Matt Nelson on keys, Phil Beale on drums, Chad McCullough on trumpet and flugelhorn, Victor Garcia on trumpet and flugelhorn, Corey Wilkes on trumpet, Patrick Mulcahy on bass, Junius Paul on bass, Tim Seisser on bass, Stephen Lynerd on vibraphone, Kalyan Pathak on percussion, and Dee Alexander on vocals.

Music In My Mind opens with “Our Princess Is In Another Castle,” a delightful title for a delightful and strange tune, perhaps my favorite. There is a bit of New Orleans fun at the start, with some good work on percussion, mixed with elements of a big band about to explode into unknown territory. And then it slides into something else entirely, and that’s all within the first minute. This track features some wonderful vocal work by Dee Alexander – voice, but no lyrics. For a moment, it seems this tune is about to end, but then it returns to that first wild section, if only briefly. This tune feels like the score to a wonderfully demented trip. It gets into some strange territory, a gloriously contained and orchestrated chaos. I particularly love the work on drums, and how the horns rise up as many voices. That’s followed by the title track, “Music In My Mind,” which also features Dee Alexander on vocals, her voice feeling like it’s welcoming us to a dreamlike vacation. There is a mellow and pretty vibe at the start. A short bass solo by Junius Paul leads to another section. I love how this music is not afraid or timid; it goes in some unexpected directions, which I appreciate, especially right around the halfway mark. That section is delightfully demented, and I love it. The bass again leads to a different area. I enjoy the playful aspect of this tune.

The title “Maxwell’s House” is obviously a play on the name of that popular coffee (Is it still popular? I don’t drink coffee, so I don’t really know). This tune was also the title track from Shawn Maxwell Quartet’s 2009 release. This new version has a cool moment at the beginning, establishing the good rhythm before the horns come in. This track has a bright, cheerful vibe, particularly because of the work on horns, especially Shawn Maxwell’s work, and is a lot of fun. There is also some really nice stuff by Matt Nelson on keys, and more vocal work by Dee Alexander, blending with the horns. “King Bill” is another composition that Shawn Maxwell is revisiting. It originally appeared on his 2005 release, Originals, featuring a completely different band and a very different feel. This new version opens with some interesting and cool percussion, with the horn dancing over it. And then Shawn leads us into a different section, a delightful dance, like pixies alighting in a city alley where denizens of the night rise from the shadows to greet them by banging on trash can lids and whatever else is handy, creating a joyous, animated sound. I love this track. Kalyan Pathak is on percussion on this one.

When “Another Monday” opens, it feels like it’s already in progress, like a stressed out guy in morning traffic, his mind racing even if his car is not. Then it becomes a conversation between the horns, like they’re both commenting on the same thing, adding to each other’s thoughts. This is wonderful stuff, and this track includes some nice work on keys as well. This is another of the disc’s highlights. It’s followed by “Glamasue,” another composition that was originally included on Shawn Maxwell’s Originals. This one features some good, funky work by Tim Seisser on bass. The CD then concludes with “Snow Snow,” an easygoing, kind of relaxed tune featuring Corey Wilkes on trumpet.

CD Track List
Music In My Mind is scheduled to be released on May 18, 2018 on OA2 Records.
Posted by Michael Doherty at 8:24 PM