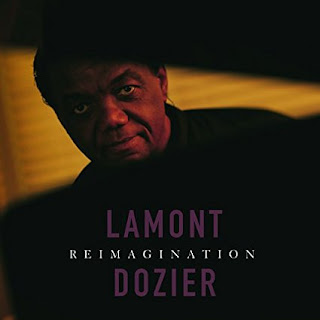 Lamont Dozier is one of the folks responsible for the Motown sound. He co-wrote (with Brian Holland and Eddie Holland) some of Motown’s most famous and beloved songs, such as “Where Did Our Love Go,” “Heat Wave,” “You Keep Me Hanging On” and “How Sweet It Is (To Be Loved By You).” That songwriting team has been inducted into the Songwriters Hall Of Fame, as well as The Rock And Roll Hall Of Fame. And now Lamont Dozier has released a new album of some of his most famous compositions. Titled Reimagination, it features special guests on most tracks, including Graham Nash, Lee Ann Womack and Todd Rundgren. Though, after leaving that songwriting team, Lamont Dozier continued to write for other artists, he also has been putting on his own albums since the early 1970s, and did record some of these songs before, including them on a 2004 release titled Reflections Of.  This new album has a very different sound and approach, and will give you a new appreciation for these songs. The liner notes contain an interview with Lamont Dozier, in which he gives his thoughts and recollections about each of these songs and their origins.

This CD opens with a medley of four songs the Supremes recorded: “Where Did Our Love Go,” “Stop In The Name Of Love,” “Come See About Me” and “Baby Love.” What’s remarkable about this collection of four songs is that every one of them reached #1 on the Billboard Hot 100. Not bad, eh? If Dozier, Holland and Holland had written only these four songs, they’d still be recognized as talented songwriters. His take on “Where Did Our Love Go” is tender and almost heartbreaking, and you can really hear the plea in his voice. It’s a wonderful new look at the song, and it builds toward the end, leading to “Stop In The Name Of Love.” Interestingly, Lamont Dozier then eases into “Come See About Me,” which has a more passionate and moving vibe. Likewise, “Baby Love” is thoughtful and pretty. Graham Nash joins him on backing vocals on this medley.

“How Sweet It Is (To Be Loved By You)” is such a damn good song. I always loved when the Jerry Garcia Band would play this one in concert, as it never failed to make the crowd happy. It’s a song that raises your spirits and makes you smile every time you hear it. While the arrangement on this CD is more sparse than usual, it still has that bright energy, and focuses on the vocals, the lyrics. On this track, Lamont Dozier is joined by Gregory Porter on vocals. This one also features some wonderful work on keys. That’s followed by “Reach Out, I’ll Be There,” which was a number one song for The Four Tops. This version is slower, more intimate at the start, and then stresses the song’s gospel vibe toward the end, with some great backing vocals. Then we get another hit for The Four Tops, “Baby I Need Your Loving,” which for me is one of the disc’s highlights. This version has a bright, uplifting feel and sound, and features some nice work on acoustic guitar. Lee Ann Womack joins Lamont Dozier on vocals for the choruses, which also helps to make this track something special. They sound really good together.

Lamont Dozier pairs a couple of songs that were hits for Martha And The Vandellas, beginning with “(Love Is Like A) Heat Wave.” This tune establishes a cool vibe right from the start, with that work on bass, and even includes finger snaps; then the choruses kind of rock. Jo Harman joins him on vocals. It slides into “Nowhere To Run,” which has a New Orleans rhythm and sound, which is fantastic. This is one of my favorite tracks, and features one of Lamont’s best vocal performances. That’s followed by another Martha And The Vandellas tune, “In My Lonely Room.” This is a beautiful and moving rendition, and features Todd Rundgren.

Lamont Dozier delivers a very cool, bluesy version of “Take Me In Your Arms (Rock Me A Little While),” a song that was recorded by Kim Weston, The Isley Brothers and The Doobie Brothers. This version builds and starts to really rock, before relaxing at the end, and features nice work on harmonica and guitar. Marc Cohn joins Lamont on this track, which is yet another highlight of the album. That’s followed by “You Keep Me Hangin’ On,” another song that was a #1 hit for The Supremes. It was also a hit for Vanilla Fudge and Kim Wilde and Reba McEntire. Lamont Dozier delivers a nice, slow version, where he is joined on vocals by Sarah Joyce (also known as Rumer). He follows that with yet another hit for The Supremes, “Reflections,” featuring Justin Currie. I love this rendition, which has some pretty work on guitar and passionate vocal performances. “I Can’t Help Myself (Sugar Pie, Honey Bunch)” is fun, as always. The CD then concludes with a second version of “Reach Out, I’ll Be There,” this one performed as a duet with Jo Harman.

CD Track List
Reimagination was released today, May 25, 2018, on Goldenlane Records, a division of Cleopatra Records.
Posted by Michael Doherty at 1:54 PM