Banjo Nickaru & Western Scooches: “Get Us Out Of Fearland” (2018) CD Review 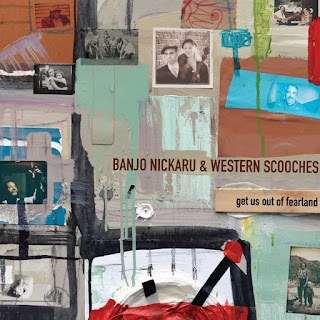 Yes, it was the album’s title that initially sparked my interest in the new release by Banjo Nickaru & Western Scooches: Get Us Out Of Fearland. These days (since November of 2016) have been marked by fear, anger, and depression, and we all are hoping for a way out of this mess. Perhaps this album offers us an escape route. This band is the husband-and-wife team of Nick Russo and Betina Hershey. They released their first full-length album a couple of years ago. Titled Very Next Thing, it featured mostly covers. Their new album features mostly original material, written by Betina Hershey, who provides the vocals and plays guitar. Nick Russo likewise plays guitar, and also banjo, resonator, mandolin, bass, organ, harmonium, rainstick and other assorted instruments. You’d think they’d have it all covered, but this album does feature some guest musicians on certain tracks. The music is a mix of folk, jazz, bluegrass, and whatever else tickles their fancy. While it may not provide the actual exit for those of us desperate to see an end to this frightening fascist state, it will certainly make the journey there more enjoyable.

The album opens with “Soar,” a nice, optimistic title, and a totally delightful song. This one features a few guest musicians, including Harvey Wirht on drums, Emiliano Valerio on tambourine and Miles Griffith on backing vocals. Here is a taste of the lyrics: “Ain’t much I gotta prove/So I keep out of the game/You’re still out there on the move/But you and I, we’re kinda the same/We gotta soar.” Oh yes. And I dig that banjo. “Soar like nothing could go wrong/Soar like no one’s out there dying.” That’s followed by “I Wish The World Knew Why.” Something about the sound of this song is raising my spirits, which I need every day. “You were born to reveal the lie/I was born, I don’t know why.” This track features some seriously nice work on guitar.

“Get Us Out Fearland,” the album’s title track, has kind of a strange sound. It opens with percussion and vocals, elements of folks and gospel and some tribal, elemental rhythm. It has a raw, immediate sound, which fits the subject. After all, we want an answer now, and there’s no time to smooth the edges of our desire. “I may prefer the quiet way/But now it’s time to disobey/And though we’d rather sleep or hide/It’s time to stand up at your side/Get out of us of fearland/Lead us through the night/Get us out of fearland/Take us to the light.” You may find yourself joining the tribe, joining in on the chorus before too long. David Pleasant is on drums, and Miles Griffith provides some backing vocals. There is a bit of chaos toward the end. Then “I Don’t Need No Glasses” has a great old-time sound, and as if to underscore that, they add the sound of an old record playing at the start. Betina Hershey gives a wonderful, cheerful vocal performance, perhaps my favorite of the album. And Nick Russo delivers some excellent stuff here. “All I need is that one song, baby/And I lose all control.”

We then get the only cover on the album, a traditional tune titled “A Hundred Miles,” which features Kenny Kosek on fiddle. You might know this song by one of its many other titles, such as “100 Miles Away From Home,” “500 Miles Away From Home,” “Five Hundred Miles” and “Reuben’s Train.” A lot of the versions I’ve heard over the years are fairly slow, sometimes mournful. This version by Banjo Nickaru & Western Scooches is decidedly more upbeat and cheerful. Emiliano Valerio plays tambourine on this track. That’s followed by “Needed Now,” a song with soul and purpose, a call to action against hatred. “I thought we had much clearer nights/I guess I know I’m needed now/My folks, they fought for equal rights/But even so, I’m needed now/Freedom – always a fight, it’s yours and mine.” Harvey Wirht is on drums, and Emiliano Valerio is on percussion.

“Don’t You Follow Me” is an interesting song, and one I can relate to, with lines like “I’ll be tuning out the news and what the world has done,” something I keep promising myself I’ll do, but then failing. The main line is “Don’t you follow me, don’t you follow me until you’re happy.” This track features an intriguing combination of sounds and use of percussion, helping to make it one of my favorite tracks. The album then concludes with “Park Song,” an unabashedly cheerful tune. Miles Griffith provides some vocals on this track, and David Pleasant is on drums. “Let the songs flow/All the ones you know.”

CD Track List
Get Us Out Of Fearland is scheduled to be released on June 15, 2018.
Posted by Michael Doherty at 9:57 PM