The Fugitives: “The Promise Of Strangers” (2018) CD Review 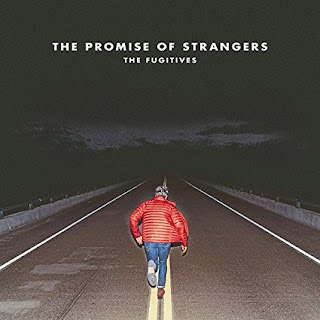 The Fugitives are a Canadian group, based in Vancouver, centered on the duo of Brendan McLeod and Adrian Glynn. They work in the folk realm, but with elements of pop and rock mixed into their music. Their new album, The Promise Of Strangers, features all original material, written by Brendan McLeod and Adrian Glynn. And the songwriting is certainly one of the duo’s strengths. These are emotionally engaging songs, some of them touching on serious topics. Brendan McLeod is on vocals and guitar; Adrian Glynn is on vocals, guitar, piano, bass, mandolin, synthesizer, organ and percussion. Joining them on this release are Steve Charles on banjo, bass and vocals; John Raham on drums and percussion; James Scholl on bass; Ali Romanow on violin and vocals; Ben Elliott on organ; Cory Sweet on saxophone; Vince Mai on trumpet, Cayne MacKenzie on synthesizers; Carly Frey on violin; Marcus Abramzik on bass; and Leon Power on drums.

On the CD case, in parentheses after the title of the first track, “No Words,” it says “for L. Cohen.” And that is what first piqued my interest in this disc. Leonard Cohen was (and still is, really) the world’s greatest songwriter, and I figure I can appreciate the music of any artist that appreciates his work. In that foul year of 2016, Leonard Cohen left us. In this CD’s liner notes, the band indicates this song was written the next day. That next day, by the way, was just as bad, for that was the day of the election which took away hope and gave us Trump. The song, however, is gorgeous and moving and powerful. “There used to be grace, there used to be meaning/I have no words, I think he took ‘em all out/I have no courage to face the night coming/I have no light to shine through this crowd/I never knew a stranger that heard my heart better.” Amen. The Awesome Strangers Gospel Choir joins them on this song, and there is a beautiful moment toward the end where the lyrics are delivered a cappella.

“See This Winter Out” has a more cheerful, positive sound, in part because of the work on banjo. But this song addresses loss too, and moving on. And it is in the moving on that this song feels positive. Like they say, “And we will see this winter out.” This is one of my favorite tracks, and it features some wonderful lyrics, like these lines: “Hope walks out of each room in your mind/We make our clumsy jokes/We can’t forget how to try/But you’ve always had one foot in the fire.” And I love that sweet work on violin. Several songs on this album deal with memories of those who have passed. “Northern Lights” is dedicated to Steel Audrey, a singer and songwriter who died in 2015. It has an uplifting feel, and I absolutely love the violin. “I can’t remember the things that you said/I’ve never been much of a steel trap/But I knew that we would be talking of these days/’Til we grew older/Oh, the Northern Lights/I’ll never need a better way to say goodbye.” Then in “Goodnight Everybody,” they sing “We’re here, then we’re gone/Just the pictures that hang on the wall.” Though this song is about being musicians on the road, these lines also remind us that life is so short. Many of these songs seem to remind us to appreciate those people in our lives, because it’s all so fleeting. The vocals are strong on all of these tracks, but this one in particular features wonderful vocal performances, and is another favorite of mine. It ends so beautifully, so gently.

“Hey my mother sang but she couldn’t sing” is the first line of “My Mother Sang,” and it makes me think of my own mom. She can’t sing, but no matter. This one features more nice work on violin. “Orlando” is about the shooting at Pulse. It’s so hard to come to terms with an attack or shooting, for each day seems to bring a fresh horror. The Orlando nightclub shooting happened in the summer of that most foul year 2016, and there have been dozens of mass shootings since then. “But enough is enough is enough is enough,” The Fugitives sing in this song. It is something I feel we’ve been saying for a long time. We need strict gun control legislation right now, and we’re not going to get it from the assholes currently in power. So those assholes need to be removed, and immediately.

“Come Back Down” has an uplifting sound. Nothing sounds as positive as these lines right now: “We’ll be waking up to take the town/Take it back for good.” Oh yes! The album then concludes with “Lights Out,” a song dedicated to Adam Capay. I did not know the story of Adam Capay, but looked it up after seeing this song’s dedication. Adam Capay was held in solitary confinement for more than four years while awaiting trial (the United Nations has stated that being held in solitary confinement for more than fifteen days is torture). The overhead light in Adam Capay’s room never was turned off; thus, the song’s title. “Get lost in the lost sleep/And dream your way through the underground to a place you’d rather be/’Cause for all this there’s nothing to say.”

CD Track List
The Promise Of Strangers was released on January 26, 2018 on Borealis Records.
Posted by Michael Doherty at 4:03 PM