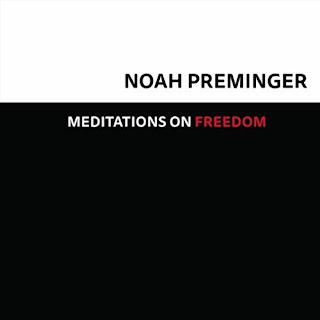 These days it seems like a lot of the big issues are back in play, problems we thought were largely solved now prove themselves to be ongoing, and things we may have taken for granted are now thrown in question, even in doubt. The country has gotten ugly, and faster than most of us imagined possible. We’ve seen the worst our country has to offer rise to positions of power, and cheered on by sad, twisted, uneducated creatures who seem bent on dismantling all that is good about our country while simultaneously claiming to be putting the country back on track. But it’s also gotten us thinking about these things again. And so an album titled Meditations On Freedom seems perfect. Saxophonist Noah Preminger offers exactly what he promises in that title, some original material, as well as instrumental renditions of pertinent songs by well-known artists like Bob Dylan, Bruce Hornsby, Sam Cooke and George Harrison. Joining Noah Preminger on this release are Jason Palmer on trumpet, Kim Cass on bass, and Ian Froman on drums. This album was released the day Donald Trump took the oath of office, certainly not a coincidence, and it is good company as we make our way through these wretched times.

Noah Preminger opens with three of the four of the album’s covers, perhaps to ease us in with familiar material. All three are about the Civil Rights Movement. The first track is “Only A Pawn In Their Game,” a Bob Dylan composition which was included on The Times They Are A-Changing. If you’re going to put together an album with thoughts on freedom, it certainly makes sense to open it with something from this record. But it is an interesting choice for an instrumental rendition, as Dylan’s voice and the lyrics are the focus, and the music is basically some strumming on guitar. But of course, perhaps that very thing is what opens it up to interpretation. It opens with some thoughtful playing on horns, moving and serious. It’s more than a minute before the bass and drums come in. The song is about the murder of Medgar Evers, and the track does feel for a time like a funeral hymn, a dirge. But it offers some exploration from that point. Noah Preminger follows that with Bruce Hornsby’s “The Way It Is,” here titled “Just The Way It Is.” This song too refers to the Civil Rights Movement, and is about the divide between the poor and the wealthy. “That's just the way it is/Some things will never change/That's just the way it is/Ah, but don't you believe them.” This rendition begins in familiar territory, but that is a launching pad for a kind of wild jam, with the horns crying out over some cool work on drums. And then check out that bass line, which propels the music along, keeps things under some control. This version features some nice work on drums, particularly toward the end. I saw Bruce Hornsby And The Range in concert only once, opening for the Grateful Dead (this wasn’t long before Bruce would become a member of the Dead), and as I recall the band did jam and incorporated some jazz into its music. The third of the album’s covers is Sam Cooke’s “A Change Is Gonna Come,” a beautiful, effective and personal song from Sam Cooke’s final studio album, Ain’t That Good News. This song came out the same year as Bob Dylan’s The Times They Are A-Changing album, 1964. Noah Preminger’s version begins gently but surely, the saxophone speaking over the bass line before the others come in. You can hear Sam Cooke’s voice in the saxophone. This is a wonderful rendition.

We then get into the original material, beginning with “We Have A Dream,” also about civil and equal rights, its title obviously a reference to Martin Luther King’s famous speech. It is a bright and empowering piece with the horns sounding direct and true. They know just what they have to say here, and say it clearly and well. I love Jason Palmer’s work on trumpet. And the bass and drums have a cool, kind of hip groove happening, making me think of beat poetry and those great low budget black and white grindhouse films of the fifties and sixties. That’s followed by “Mother Earth,” which begins somewhat quietly, even sadly. The Trump regime, immediately upon gaining power, seemed not only set on destroying the country, but the whole Earth, when Trump put the scum-sucking Scott Pruitt in charge of the Environmental Protection Agency. It was the cruelest joke he played on us, with potentially disastrous consequences for Mother Earth and for us all. In this track, it feels like Mother Earth is crying out at times, in pain, in sadness. But other times the Earth speaks in understanding, for we are fallible creatures. And there is a steady rhythm at times, which gives me hope that Mother Earth will persevere. I’ve felt lately that the Earth is trying to rid herself of humanity, like trying to shake an illness, a virus, or a parasite.

One of the things I really have trouble understanding is how a lot of women could have voted for Donald Trump. Or any women, for that matter. How could a single woman vote for that rapist? Everyone heard the Access Hollywood tape; everyone heard him bragging about sexually assaulting women. How was that not the death of any political aspirations the cretin had? And for even one woman to cast her vote for him is unbelievable. And yet, a lot of women did just that. Of course, these are the same horrible women who wore T-shirts that read “Trump can grab my pussy” and “Hey, Trump, talk dirty to me.” Well, as depressing as that was, the Women’s March immediately following his inauguration raised everyone’s spirits. Here was democracy in action. Here is what is best about our country (aside from those stupid hats, of course). The march was held on January 21, 2017, the day after this album was released, so Noah Preminger isn’t reflecting on the experience of the march in this piece, but rather expressing excitement and hope for it. And it is kind of an exciting tune, with momentum. This music on this album, by the way, was recorded on December 17, 2016, a time when most of us were still in shock and drinking heavily.  That’s followed by “The 99 Percent.” Well, a tune titled “The 99 Percent” is obviously a song about, and for, all of us (that other one percent doesn’t listen to jazz). There are moments that feel playful, the horns expressive over that good rhythm.

The album’s final cover is George Harrison’s “Give Me Love (Give Me Peace On Earth),” one of his most popular songs. This rendition begins with drums, the saxophone then coming in to begin what would be the vocal line. “Give me hope/Help me cope with this heavy load.” Interestingly, the trumpet comes in as another voice, and the track becomes a duet, each instrument having something to say, sometimes singing together. It’s a wonderful effect, and I like this track a lot. The album then concludes with another original composition, “Broken Treaties.” From the title, it doesn’t sound like the most optimistic note to end on, and indeed the horns have a sad, mournful quality right from the beginning of this track. But the Trail Of Broken Treaties was an important protest in bringing attention to the unfair treatment of Native Americans, and this track grows in power, and has some wonderfully wild moments.

CD Track List
Meditations On Freedom was released on January 20, 2017 on Dry Bridge Records.
Posted by Michael Doherty at 11:54 PM