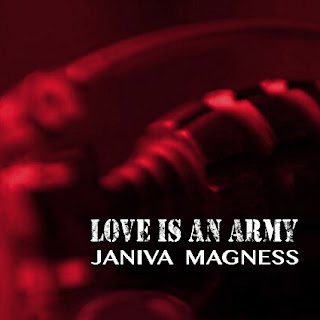 Janiva Magness has won several music awards in the blues realm, and clearly deserves them. However, she does not limit herself to strictly blues, as she shows on her excellent new album, Love Is An Army, which has elements of soul and country and rock. These influences were also present on her previous full-length studio release, 2016’s Love Wins Again, the album that turned me on to this artist. As on that album, Love Is An Army features mostly original material, written or co-written by producer Dave Darling. Joining Janiva Magness on this album are Stephen Hodges on drums, Davey Faragher on bass, Arlan Schierbaum on keys, Doug Livingston on pedal steel and dobro, Dave Darling on guitar and backing vocals, and Phil Parlapiano on piano. On horns are Darrell Leonard, Joe Sublet and Alfredo Ballesteros. There are also several guests joining her on certain tracks.

The album opens with “Black To Blue,” a song written by Janiva Magness and Dave Darling. This is blues with a whole lot of soul, and features some nice touches on horns. I love the emotion to Janiva’s vocal delivery. It feels like she is really opening herself up to us. “Looking for some mercy/But there’s none to be found/It’s so messed up, a dirty deal/There’s no going back now.” That’s followed by “Hammer,” featuring Charlie Musselwhite on harmonica. His harmonica is a great presence right from the start, and I love it. But it is Janiva’s voice that is the star here. There is something both powerful and comforting in her voice here, a voice that can kick ass and ease your pains. While the asshole in the White House wants to build a wall, Janiva sings, “You’ve got to keep on swinging/Until the walls come down.” This song too was written by Janiva Magness and Dave Darling. Check out these lines: “You’ve got to try to keep laughin’/Even when your heart breaks/You just keep on pushin’ up the mountain/No matter what that mountain takes.”

Janiva Magness then dips into country with “On And On,” featuring Rusty Young (from Poco) on pedal steel. Of course, it’s a bluesy country. The image of a mountain plays a part in this song too: “But love is like a mountain now forever/And when I finally reached the top/I could see for miles/And all I knew was you were on my mind.”  And when she sings that they will go “On and on until we get it right,” I have faith that they’ll get there. This song has a positive vibe that I like, that I need. It was written by Colin Devlin and Dave Darling.

“Love Is An Army,” the title track, is one of the album’s best. It’s a moving and engaging song, one of those songs that give you the feeling that things are going to be okay, that we aren’t alone, and I’ll take a song like this any day I can get it. Janiva shares vocal duties on this one with Bryan Stephens, and his presence adds to that comforting sense that we are not alone. “Look all around you/There ain’t no heroes here/You know there’s only flesh and bone/No wings, no angels flying/There’s only walking here/But we don’t walk alone.” This song, written by Janiva Magness and Dave Darling, has a beautiful power. That’s followed by “Down Below,” another seriously effective and captivating song, this one with folk and country and soul elements. Janiva seems able to draw us in with ease. “Say my name, you’ll see/When the devil cries, he’s a lot like me/So darlin’ now just go to sleep/And I’ll go back to the cold, dark deep.” Courtney Hartman joins Janiva on guitar and banjo on this track.

Janiva Magness turns in another moving vocal performance on “What I Could Do,” one of only two songs on this CD that Dave Darling did not have a hand in writing. It was written by Paul Thorn, and features Delbert McClinton on vocals with Janiva. “If I didn’t need you, I’d turn the radio on/And it wouldn’t kill me/When I heard our old song.” This is a gorgeous track. It’s followed by another of the disc’s highlights, “Home.” I keep saying I need to make a mix CD of songs titled “Home.” There are so many good songs with that title, by artists like Ellis Paul, The Evangenitals, Erica Blinn, Michelle Malone, Joe Walsh, The Spongetones, James Houlahan, Rachael Sage, The Ides Of March, and on and on. What is it about the word home that inspires so many songwriters to craft some of their best material? This “Home” was written by Gary Pinto, Natasha Pinto and Dave Darling, and features Cedric Burnside on guitar and vocals. This is a powerful and timely song, with a steady thumping rhythm and honest, impassioned vocal performances. “Peace of mind is hard to find/Here in the world today.” And I have to remind myself daily, as Janiva sings, “This all will pass – you can count on that.” (Though I am not patient and wish someone would put an end to Trump and Pence today.)

I love the idea behind “Love To A Gunfight,” in which Janiva sings “This song’s our weapon tonight/We’re bringing love to a gunfight.” It’s an idea I want to embrace and put into action, but these days I often find myself so fucking angry that I am afraid of what I might do if I run into someone with, say, a “Make America Great Again” hat. Will I remain peaceful? I hope so, but I don’t want to find out, because honestly I want all of those people to disappear from the planet. The album concludes with “Some Kind Of Love,” which also seems to urge us to choose love. It’s the right path, of course, but can be difficult. “It’s gonna take some kind of love/To cure all this pain/It’s gonna take some kind of love/To wash it away.” Janiva delivers another excellent and powerful vocal performance here. This, by the way, is the other song not co-written by Dave Darling. It was written by Lauren Bliss and Andrew Lowden. “When you’re low/When you’re in pain/And nobody knows/How you stumble again and again and again/Remember, truth flows like a river/Across the Mississippi plain/So send me some, some kind of love/And hold out for that change.”

CD Track List
Love Is An Army is scheduled to be released on February 23, 2018 on Blue Élan Records.
Posted by Michael Doherty at 2:23 AM