Music Memories From The Old Refrigerator 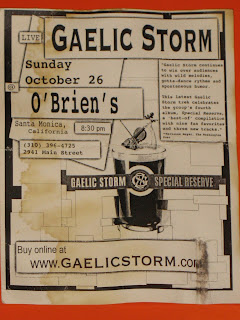 My refrigerator – which I’ve owned for something like twenty years – woke me up the other day, angry, shouting at me for attention. This went on for fifteen or twenty minutes; then, exhausted, it fell silent. But it did not remain silent for long. Every time the motor kicked in, the bugger got damn ornery. Having basically no knowledge of electronics whatsoever, I did what I could – I cleaned the back of it (something I apparently had never done before – holy shit), smacked it a few times, scolded it, and pleaded with it. None of that worked. So I ordered a new refrigerator. That meant taking off everything I had taped to the refrigerator door, including some music-related items.

These items included a little promotional card for a Gaelic Storm concert at O’Brien’s in Santa Monica. When I first moved to Los Angeles, I went to that bar quite a lot. Gaelic Storm was the house band back then, playing every Sunday night, and doing nice long shows (several sets). There were drinking contests between the band and the audience (during “Seven Drunken Nights”), and it was basically the same crowd each week, so it felt like a party. Fuck, it was a party. Of course, that – like everything else – had to come to an end. Gaelic Storm became more popular and started touring fairly heavily. But on at least one occasion they came back and did a show at that little bar. The card tells me it was a Sunday, in keeping with tradition. It doesn’t list the year, but the cover of Special Reserve is pictured, and that album came out in 2003, so I’m guessing that was the year of the show. I have vague recollections of the concert – that it was more crowded than before, that a lot of the old gang attended, and that it was shorter than before. I think the band played only two sets. But the music was fantastic. It always was. 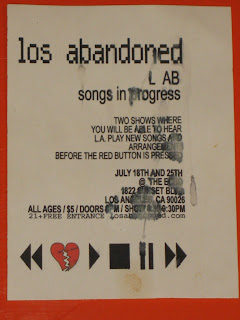 Another item is a similar card for a Los Abandoned concert at The Echo. Actually, for two Los Abandoned concerts at the Echo – one on July 18th and one on July 25th. I’m not certain of the year. I probably attended both shows, though I can’t be sure. Los Abandoned was one of the bands that I was turned on to through The Peak Show. There was a really fantastic music scene based in and around Highland Park back in 2002, 2003, 2004 (oh, Mr. T’s Bowl, how we miss you). Los Abandoned was a band I loved seeing perform, and I think I saw them play at The Echo several times. Los Abandoned – as far as my memory tells me, anyway – seemed to do more club gigs than did The Peak Show. The card indicates that these two shows were free (unless you were younger than 21, in which case admission was $5).

Over the years, both of these cards got wet. Or something spilled on them. Who knows? There were also several Grateful Dead photos and Leonard Cohen photos on that refrigerator, as well as one photo of The Monkees, one of Go Betty Go, and one tiny ad for a concert by The Submarines. Some of those will end up on my new refrigerator. Onward!
Posted by Michael Doherty at 5:39 PM