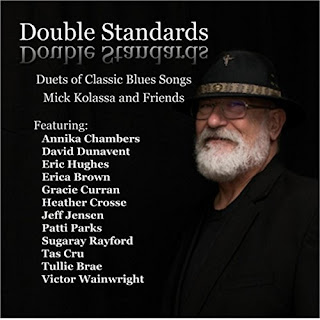 Last year, Mick Kolassa and Mark Telesca released You Can’t Do That!, an album of blues renditions of Beatles songs. Now Mick Kolassa is teaming up with several vocalists on his new release, Double Standards, a collection of covers of well-known blues tunes. Double Standards is a clever title for what is an album of duets of classic blues numbers. Backing Mick Kolassa and his guest vocalists are Jeff Jensen on guitar, Bill Ruffino on bass, James Cunningham on drums and Chris Stephenson on organ. There are also several guest musicians on certain tracks.

The album gets off to a good start with “600 Pounds Of Heavenly Joy,” with Sugaray Rayford joining Mike Kolassa. In the CD’s liner notes, Mick Kolassa mentions that this is the song that began the whole project. They’d been joking about doing this song together for years. Of course, it was originally titled “300 Pounds Of Heavenly Joy,” but as there are two vocalists, well, the amount is doubled. This song was written by Willie Dixon, and it is followed by another Willie Dixon tune, “I Just Want To Make Love To You,” one of his more popular tunes, one that has been covered by a lot of artists over the years. There is something seriously sexy about this rendition of the Willie Dixon classic, thanks to Heather Crosse’s vocals and that cool guitar work. Eric Hughes joins the band on harmonica. The third Willie Dixon song covered on this disc, “Spoonful,” is a song I first heard on a Cream cassette in my childhood (I also saw the Grateful Dead do this one). Here Mick is joined by Erica Brown, who delivers a delicious vocal performance, sometimes sounding smooth and sexy, other times getting mean (and still sexy), belting out lines. There is also some cool work on organ on this track.

Victor Wainwright joins Mick Kolassa for a delightful, playful rendition of Tampa Red’s “It’s Tight Like That.” This one is just a whole lot of fun, certain to put a smile on your face. Hell, just the lines “Little red hen, she said to the rooster/You don’t come around here as often as you used ta” ought to do the trick (lines I don’t think were in the original recording, though this is one of those songs that has different lines in different versions). They also throw in a bit of “Make Me A Pallet On Your Floor,” for good measure. Eric Hughes plays harmonica on this track too, adding some wonderful stuff. Mick Kolassa also covers Tampa Red’s “It Hurts Me Too,” with Patti Parks joining him on vocals. I think it was Chuck Berry’s version that I heard first (which is fantastic), but this is another song that I love almost regardless of who is performing it. It’s just one of those great tunes. That being said, this is an excellent rendition, with some beautiful work on violin by Alice Hasan. Both Mick Kolassa and Patti Parks deliver really good vocal performances. I love that little laugh in Mick’s voice on the line “When things go wrong” early on. It feels human, real. It’s interesting to hear this as a duet, as it gives the song another dimension, making us feel even more that these two people should be together. This is one of the disc’s highlights. Mick Kolassa also covers Tampa Red’s “Don’t You Lie To Me,” joined by Gracie Curran. This song is also sometimes titled “I Get Evil,” which is why this version has “Evil” in parentheses. This track features great work on organ and bass.

I’ve said it before, and I’ll say it again: “Fever” is a song that is just inherently cool, and it’s nearly impossible to fuck it up (as far as I know, Madonna is the only one who has managed to perform that feat). The version here, with Annika Chambers joining Mick Kolassa on vocals, is a good, jazzy, totally enjoyable rendition. That’s followed by an excellent version of “Nobody Knows You When You’re Down And Out,” with Tas Cru. I love the addition of violin. This is one of my favorite tracks. At the very end, Mick says, almost under his breath, “Man, ain’t that the truth.” Indeed. And that’s what you’ll get from this album – the truth. No nonsense here, just some great music.

I was just the other day enjoying the new album from Eric Hughes (check out my review of Meet Me In Memphis), and here he not only plays harmonica on a few tracks, but also joins Mick Kolassa on vocals for a wonderful rendition of “Key To The Highway.” I love the way his harmonica sounds like a third voice over that good groove. Jeff Jensen joins Mick Kolassa on vocals for “Outside Woman Blues,” this rendition owing something to Cream’s version (which, if I recall correctly, was the first version I ever heard). The album concludes with a big, wonderful rendition of “Ain’t Nobody’s Business,” featuring the entire company of singers. Yeah, it’s like the last number of a big concert where they bring everyone back out on stage. Mick even introduces singers as they take a few lines, and this version features some lyrics seemingly written specifically for the occasion. The first verse sung includes the lines, “If I get together/With all my friends/And we sing an old blues song/That don’t ever end.” And Gracie Curran sings, “If I want to get high/And smoke a big fat joint/You want to bring me down/And what’s your point?/Ain’t nobody’s business if I do.” Jeff Jensen’s line about the vocalists singing together receives some laughter. You’ll know why when you hear it. The song has a big finish, with a strong soul vibe.

CD Track List
Double Standards is scheduled to be released on February 5, 2018 on Swing Suit Records.
Posted by Michael Doherty at 1:38 PM