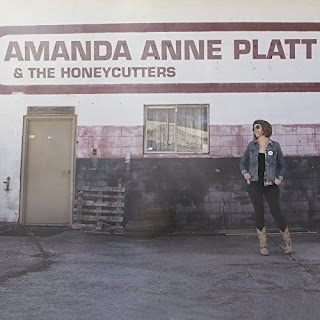 I was turned onto The Honeycutters a couple of years ago when they released On The Ropes. Most of the songs on that album were written by the band’s lead vocalist, Amanda Anne Platt, and – as I mentioned in my review of that album – the songwriting is one of the band’s strengths. Well, after that album – the band’s fourth – Amanda decided to include her name in the band’s name. And so for their 2017 release, the band’s name, as well as the album’s title, is Amanda Anne Platt & The Honeycutters. But that is all that has changed. The songwriting is just as strong, and the band is still recording excellent tunes. All of the songs on this release are originals, written by Amanda Anne Platt. As on the previous release, Matthew Smith plays guitar and pedal steel, Rick Cooper is on bass, and Josh Milligan is on drums. Joining them this time is Evan Martin on keys. Tim Surrett, who co-produced the album, provides backing vocals on a few tracks.

Lately, songs about birthdays and aging have spoken to me a bit more strongly, and I suppose there’s no question about why that is. In this album’s opening track, “Birthday Song,” Amanda Anne Platt sings, “Fall is settling in/Days are getting short again/And the morning’s getting real nice for sleeping/Every time it gets colder, I get another year older/I start looking for lines in the bathroom mirror.” And we’re finding them, aren’t we? A bit later she sings, “I’m just so damn glad to be here,” and I think, oh yes. With all the craziness in the world and all the problems these days, I still can’t help but be so damn glad to be here. This is a wonderful song, with ultimately a positive vibe, which I appreciate. This is one of my favorite tracks. “I know you worry, but what’s your hurry, baby/We’re all going to get there in the end.”

That’s followed by “Long Ride,” a sweet and moving country tune about death and life, looking forward and being present. The line “This is goodnight, not goodbye” is of course not exclusive to this song, but it’s still effective. And check out these lines: “We were dying but you couldn’t tell/If you only would have dreamed the same dream too/Maybe then you wouldn’t worry what we’re coming to.” And I really like these lines: “You say your life has been a study of goodbye/Oh, but honey, can’t you feel your hand in mine?” Then some nice pedal steel sets the tone of “What We’ve Got,” an unabashed love song that is going to make you want to hold that special someone in your life.  Maybe I’m just an emotional wreck, but this one brought tears to my eyes (I can hear my girlfriend saying, “Oh god, you’re goofy,” but there it is). “It makes me want to/Call you up and say I’m coming home tonight/’Cause all the time I thought that I was wasting/I was just learning how to look into your eyes/And say I want you, I want to call you mine.” Beautiful, right? And there is some nice work on both keys and pedal steel toward the end.

There is an important message in “Diamond In The Rough,” something we need to be reminded of these days, when many of us are quick to anger: “That woman in the check-out line/Ruining everybody’s day/You know nobody’s born that angry/How you think she got to be that way/So when a stranger meets your eye, be the one that smiles first/Nobody ever died from a little kindness no matter what you’ve heard.” We’re all struggling, we’re all trying to figure out what the hell is going on, trying to make something of our lives, and wanting affection. Yes, even those goddamn Trump supporters (though sometimes that is difficult to remember). “But it’s only ‘cause I want you to be happy, baby/And tell me what’s so wrong with that?”

“Eden” is a song with a sweet folk and country vibe. There is a bit of nostalgia to its sound and feel, and perhaps all songs that take place in the middle of the country have that element. Here is a taste of the lyrics: “We moved back here from Boston ‘cause I lost my job and this is where I’m from/And the kids seem pretty happy, they don’t miss their dad too much/I can’t answer all their questions but they never lack for love/And that’s what I tell my mother when she calls.” I do have mixed feelings, of course, on the desire for ignorance, in lines like “It’s what I don’t know that makes this living easy/The more I learn, the more it brings me to my knees/And I say please/Let me back inside the garden/I won’t eat anything that’s fallen from that goddamn tree.”  But you just can’t argue with these lines: “We don’t keep a TV ‘cause the news is always bad/And it teaches us to want all the things we’ll never have/And there’s always someone getting hurt cause someone else was feeling too let down.”

“Learning How To Love Him” is a bittersweet love song about a marriage, a song of looking back and taking stock, and ultimately realizing things aren’t so bad. “We raised our children, we raised our voices/Made mistakes, made our choices/We’ve both been right and we’ve both been wrong/And after all these years, I’m still quick to draw.” This is a beautiful song, delivered in a perfect, unadorned way, giving more weight to the vocals and lyrics. “And after all these years, this is what love is.” That’s followed by “Brand New Start,” another song about taking stock in a long relationship, though this one seems to be going in a different direction.

I love the sweet feel of “Rare Thing,” another of this album’s highlights. This one is really making me miss a certain someone, a rare thing herself. “Oh, honey, you’re a rare thing/Since the day I started caring, I’ve been hooked/You keep writing the book, I hope you don’t ever stop/I know they said that it would never last/But these years go by so fast.” That’s followed by “The Things We Call Home,” a playful country tune that I can’t help but enjoy, moving my head to the bass line and smiling at Amanda’s vocals and the delicious work on keys. The album then concludes with one of its strongest tracks, “The Road.” I appreciate the perspective here. I mean, it’s about an end, but there is no real bitterness, nor glee. There is hope and kindness and sympathy. “I hope the road is good to you ‘til then.”