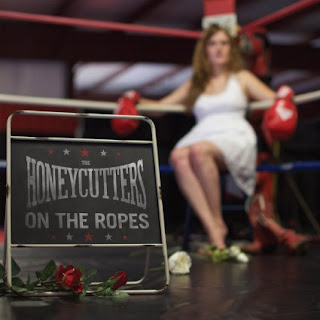 The Honeycutters are a country and folk band based in Asheville, North Carolina, and led by vocalist and songwriter Amanda Anne Platt (who also plays acoustic guitar), and featuring Matthew Smith on guitar and pedal steel, Rick Cooper on bass, Josh Milligan on drums and Tal Taylor on mandolin. On their new CD, On The Ropes, the band’s fourth studio album, they are joined by Jeff Collins on piano, Jason Webb on organ and Mark Platt on harmonica. This CD features mostly original material, written by Amanda Anne Platt, and the songwriting is one of this band’s many strengths. There are a lot of lines that stand out, that ring true, lyrics you can hold onto. It doesn’t come out on CD for another month or so, but for you vinyl fans, there was a special vinyl release on Tuesday.

The album opens with its title track, “On The Ropes,” which begins with just Amanda’s voice delivering the first line a cappella – a good introduction to this band for those of us who haven’t heard the earlier releases. It’s a song about someone who can take care of herself, or at least who claims she can. But I believe her when she sings, “I’ve got everything I need to get me through the night.” And I love these lines: “I’ve made my mistakes, you know I’ve paid a lot to feel this bad/It’s a thousand dollar hangover, it ain’t even the worst I’ve had.” That’s followed by “Blue Besides,” a beautiful tune, and one of my favorites. The light, sweet sound of the mandolin works wonderfully with the earnest, strong vocal performance of Amanda Ann Platt, creating a strangely positive feel, which is matched by lines like “And you’ll forget the things you know/But it ain’t giving up, it’s letting go” and “Heck no, you didn’t get it right/But you can try again tonight.”

“The Handbook” is a light, playful, catchy country love song. Check out these lines: “Babe, you give me too much credit/If there’s a handbook, I ain’t read it/All I know’s when we’re together my heart starts singing/I’m gonna let her/And you don’t have to ask to kiss me/I like it when you taste like whiskey.” This is a song I imagine played at a country bar, giving couples a chance to exchange smiles and laughs and kisses. And we can all use songs like that, eh?

Speaking of good lyrics, I like these from “The Only Eyes”: “Now I want you to love me/But I want to say when/And I want to say how much/I want to know how it ends.” And this line from “Useless Memories”: “Or did you just forget you don’t live here anymore?” It’s a simple, yet heartbreaking line. “Useless Memories” is one of my favorites. It has a relaxed, country vibe with some nice work on pedal steel. But it is the song’s lyrics that really make it stand out. “And now you’ve found some happiness/But you treat it like a guest/Waiting on fate to change its mind.”

“Let’s Get Drunk” is an upbeat country bar song with some nice work on harmonica and piano, and lyrics you really can’t argue with: “’Cause if the ship is really sinking/Then what’s the use in waiting ‘til it’s sunk/Baby, we’re already drinking/So we might as well get drunk.”  But the line I really like is, “And if I’m going to live with my choices I expect that I’ll regret at least a few.” Probably my favorite vocal performance on this CD is that on “Ache.” I just love the way Amanda delivers the lines of this song, and to sparse accompaniment so that it’s really all about her voice. “When you bring your hand to my face/When you hold me and whisper my name/Baby, I ache.”

I’ve said it often, and it remains true: Leonard Cohen is the world’s best songwriter. So if you’re going to include one cover song on your CD, why not cover the best? These days it seems like a large number of artists are choosing his “Hallelujah” (from Various Positions, one of my all-time favorite records), and finding something personal to say with it. The Honeycutters’ version is quite a bit different from most renditions I’ve heard. It feels a bit faster, and much more strongly situated in the country realm. Like most bands covering this song, The Honeycutters use Leonard Cohen’s updated lyrics rather than those found on Various Positions, singing, for example, the lines “There was a time when you let me know/What’s really going on below/But now you just don’t show that to me, do ya/But I remember when I moved in you/And the holy dove was moving too/And every breath we drew was hallelujah.” They do change the line “But you don’t really care for music, do you” to “But you don’t give a damn about music, do you,” which I have mixed feelings about. This version also has a nice instrumental section, led by mandolin.

The album then concludes with “Barmaid’s Blues,” a wonderful tune that finds two people sharing a drink and memories. “I broke the years down, I turned ‘em into days/And one by one I danced ‘em all away.”

CD Track List
On The Ropes is scheduled to be released on CD on May 20, 2016 on Organic Records. And as I mentioned, a special vinyl issue was released on April 12, 2016.
Posted by Michael Doherty at 1:49 PM