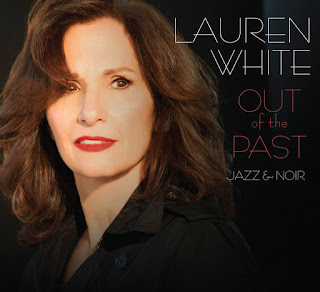 Jazz vocalist Lauren White follows her 2015 release Experiment with something quite a bit different. Titled Out Of The Past: Jazz & Noir, her new CD features songs that were heard in old film noir releases, but with her own special approach. And I think it is even better than her previous CD. As on Experiment, Lauren is joined by Trey Henry on bass. And here she is also joined by Mitchel Forman on piano, Abe Lagrimas Jr. on drums, Andrew Carney on trumpet, Hitomi on saxophone, James Sullivan on clarinet, Andrew Synowiec on guitar and Kathryn Bostic on piano. Kathryn Bostic also did the arrangements. The Lisa Liu String Quartet and the Brass Band Eclectic Plus One also join Lauren White on certain tracks.

Interestingly, Out Of The Past opens with an original tune, “When All The Lights In The Sign Worked,” a very cool, kind of sexy song about a rainy night in Los Angeles. It opens with a mischievous bass line, and just gets better and better from there, including some great work on horns. This is a totally delicious and wonderful tune, which creates a great atmosphere, showing me this city as I want to see it. In the song Lauren wonders what Los Angeles might have been like back in the day, but then the music itself almost answers her question. And who knows if the answer is accurate? It hardly matters. What matters is that I want it to be truth, because it’s so bloody cool. And so it is. “I keep wondering what it must have been like/When all the lights in the sign worked/On a long-gone Hollywood night.” And I love the way she delivers the lines “Shadows wrapping you in mystery/Like a hero in an old film noir” (especially when she dips low for the words “Like a hero”), right before the horns completely take over, let loose on the streets of this magical city. This is one of my favorite tracks. It was written by Joe Pasquale and Mark Winkler. Mark Winkler also produced this CD.

That is followed by “He’s Funny That Way,” a song that can be heard in The Postman Always Rings Twice. This version begins with some nice stuff on trumpet by Andrew Carney. Lauren White’s vocal approach is one of confidence peppered with affection. It’s like her voice almost struts, particularly at the beginning. And then later she laughs, like she’s amused by the man’s own affection, even surprised by it. It’s a really nice rendition. Another really strong and very cool track is “I’d Rather Have The Blues,” written by Frank DeVol and featured in Kiss Me Deadly, where it is sung by Nat King Cole. This new excellent rendition begins with some good work by Lisa Liu String Quartet, and features some wonderful work on piano by Mitchel Forman and a remarkable vocal performance by Lauren White. This track is cool and jazzy and sexy.

“Amado Mio” is the song that Rita Hayworth sings in the nightclub scene of Gilda. Well, she doesn’t really sing it. That’s Anita Ellis singing, and Rita Hayworth lip-synching. Still, it’s a good scene, and Rita Hayworth is fucking gorgeous. The version on this CD begins with some wonderful work on guitar by Andrew Synowiec. The Lisa Liu String Quartet is featured on this track as well. But it is Lauren White’s beautiful delivery that is the focus here. In a different sort of nightclub scene, this one from Macao (a film I haven’t actually seen), Jane Russell sings “You Kill Me.” Lauren White’s version has a playful, lively quality, and she is accompanied by just piano, drums and bass. All three musicians deliver some excellent moments. The CD then concludes with “Haunted Heart,” a song not featured in any film noir, but rather from Inside U.S.A., a musical revue by Arthur Schwartz and Howard Dietz. Here Lauren is accompanied only by Kathryn Bostic on piano.

CD Track List
Out Of The Past: Jazz & Noir is scheduled to be released May 9, 2016 on Café Pacific Records.
Posted by Michael Doherty at 8:18 PM