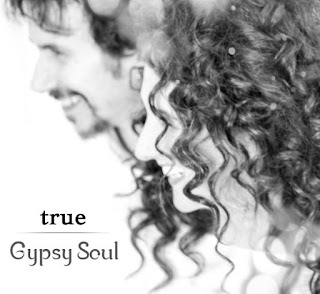 Gypsy Soul is the duo of Cilette Swann and Roman Morykit, a husband-and-wife team based in Jacksonville, Oregon, who have been performing together for approximately two decades. The duo’s new CD, True, their thirteenth release, features mostly original material. This is basically folk, but certainly not constrained by any one musical realm, drifting easily into rock and pop and blues elements and wherever else their hearts take them, wherever the songs demand (listen to “Long, Long Ride” for example). Cilette Swann provides the vocals, and Roman Morykit plays guitar and bass, and also provides some backing vocals. On this release, they are joined by Michael Forney on drums, Michal Palzewicz on cello and Mikey Stevens on horns. To give the music a more immediate and live feel, they limited themselves to just a couple of takes of each track.

They kick off the new CD with “Your Kind,” a strong tune that builds beautifully, with Cilette’s gorgeous vocals at the center. This song also boasts some good lyrics, with lines like “Your mask is now showing the face that you hide” and “I know there’s so much that lies right before me/More than my two eyes could possibly see/And soon you too will be a distant memory.” That is followed by “We Are What We Believe,” and this one too has some excellent lyrics. Check out these lines: “I’ve no regrets about who I’ve become/Just the things I haven’t done/It’s not the heartaches, but the loves that we hold dear/Oh, not our failures, but successes that we fear.” I also really like this song’s kind of relaxed groove. Plus, there is some nice work on guitar.

“Gotta Be Real” has more of a rock flavor, and it comes on strong right from the start, before settling into a good groove. And the vocals during the chorus have a kind of a modern R&B vibe. There is a whole lot of great energy here, but holy moly, for me the best part is when the horn comes in. Just fucking great. I wish that section went on a lot longer. Then “6000 Miles” has a much mellower, sweeter folk feel. I like the word play in the line “A crooked little path straight to my heart.”

Leonard Cohen is the best songwriter, no question. The song of his that is most often covered these days is “Hallelujah” (originally included on his 1984 release, Various Positions, one of my personal favorite records). This version by Gypsy Soul is beautiful, quiet, thoughtful, heartfelt. Like most renditions, it includes Leonard Cohen’s updated lyrics, with lines like “Maybe there’s a god above/But all I ever learned from love/Was how to shoot somebody who outdrew you.” But this is actually a bit shorter than many versions, and leaves out some verses. It includes only three verses: “Now I’ve heard there was a secret chord,” “Your faith was strong but you needed proof” and “Maybe there’s a god above.” I love their delivery and their handling of this beautiful song; I just wish they had included more verses. They follow that with “Magic Carpet Ride,” a pretty instrumental tune written by Roman Morykit (not the Steppenwolf song), a mood piece.

I would like the song “Mirabelle,” except for its use of the irritating feminist non-word “herstory” in the line “to share your herstory.” I just can’t get around that. Years ago I was in a Scrabble league, and someone pointed out that “herstory” had been added to the official Scrabble dictionary. That was the end of my respect for that game. Let’s be clear about this. The word isn’t “hisstory.” It’s “history.” So the feminist word should be “hertory.” But really, we just need to move past that.

“He Wore Sandals In The Snow” has kind of a cool, bluesy vibe. And of course I love the cello, an instrument I am always pleased to hear. “You’re Everything To Me” has a pretty sound and some nice work on guitar. “You’re my autumn, you’re my spring/You’re the river that runs through me/You’re my heart’s true currency/You’re everything, everything to me.” This CD then ends with an interesting and good rendition of “Amazing Grace.”

CD Track List
True is scheduled to be released on CD on April 22, 2016 through Off The Beaten Track Recordings. It was made available on Itunes on March 18th.
Posted by Michael Doherty at 1:53 PM