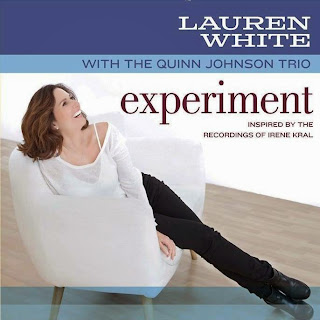 Lauren White is a jazz vocalist based in Los Angeles. On her new release, Experiment, she is joined by the Quinn Johnson Trio, made up of Quinn Johnson on piano, Trey Henry on bass and Ray Brinker on drums. Quinn Johnson also arranged and produced this CD, and worked with Lauren White on her 2013 release, Meant To Be. This new album also features a couple of special guests. Many of these songs should be familiar to you, and Lauren White does some interesting things with them. The album cover mentions that these tracks are “Inspired by the recordings of Irene Kral,” and you can certainly hear the similarities to their approaches. That being said, it's not like Lauren White is trying to copy Irene Kral's recordings.

The album opens with a good rendition of “Like Someone In Love,” a jazz standard. I love the way it begins with Trey Henry creating a cool rhythm on bass and then the other musicians coming in, paving the way for Lauren White’s entrance. “Lately I find myself gazing at stars/Hearing guitars like someone in love.” “Like Someone In Love” was written by Jimmy Van Heusen and Johnny Burke, and was a hit for Bing Crosby in the 1940s. Lauren White picks up the pace just a bit in her version, and this rendition features a wonderful groove. There is an excellent instrumental section approximately halfway through.

Lauren White then slows things down with her version of “Rock Me To Sleep,” a sweet tune written by Paul Vandervoort II and Benny Carter. Though a much mellower track, there is still a nice groove. Lauren delivers it almost like a jazz lullaby, and it totally works. It’s a bit more mellow than the version by Irene Kral. Kleber Jorge plays guitar on this track. Kleber Jorge also plays guitar on the Latin jazz number “Winter Moon,” written by Laurindo Almeida and Portia Nelson.

“Better Than Anything” is kind of a silly, playful tune written by David “Buck” Wheat and Bill Loughborough, and here it is delivered as a duet with Mitch Ellis. I love what Quinn Johnson does on piano on this track. And check out those nice touches on drums by Ray Brinker.

One of my favorite tracks is “It Isn’t So Good,” written by Tommy Wolf and Fran Landesman. Lauren’s version isn’t as lush and full as that by Irene Kral; after all, there is no horn section. But I actually prefer it. It has a more intimate feel, particularly at the beginning, due mainly to Lauren’s vocals and Trey Henry’s wonderful work on bass. “It isn’t so good that it couldn’t get better/It isn’t so bad that it couldn’t be worse.” And there is a delightful, though short piano solo in the middle, leading to a wonderful instrumental section. I wish that part stretched out a bit longer.

Another favorite of mine is “Small Day Tomorrow,” with its delicious late-night vibe. This song was written by Bob Dorough and Fran Landesman. Here is a taste of the lyrics: “I’ve got a small day tomorrow/I can sleep the day away/It won’t cause too much sorrow/Not tomorrow.” I love Lauren White’s delivery here. She really finds a lot to do with this composition.

“Experiment,” the album’s title track, is a Cole Porter song, and so of course is another of the CD’s highlights. Lauren White slows this song down and stretches it out to approximately twice its original length. (It’s also much longer than Irene Kral’s rendition.) Her version begins with a pretty instrumental section featuring Jodi Burnett on cello. I am always a sucker for cello, and certainly that instrument is part of this track’s appeal for me. Lauren’s vocals have a strange, dreamy quality at moments in this song. Jodi Burnett also plays cello on “You Are There.”

The album concludes with “Rain,” a short instrumental track that is a continuation of "Gentle Rain."

CD Track List
Experiment is scheduled to be released on June 5, 2015 on Cherry Pie.
Posted by Michael Doherty at 6:34 PM