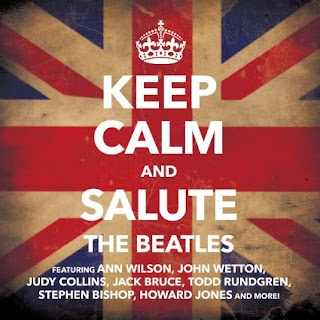 Keep Calm And Salute The Beatles, a new compilation of Beatles covers, features a pretty incredible selection of artists including Judy Collins, David Clayton-Thomas and Leo Sayer. Especially exciting is the inclusion of Jack Bruce, who died in October. His version of “Eleanor Rigby” is his last recording, and so this album is worth owning for that alone. Plus, I’m excited that my two favorite Beatles songs are covered here – “Something” and “Across The Universe.”

The album opens with “Across The Universe,” done here by Ann Wilson (yes, of Heart). She does a good job with it, capturing the mood of the original. That’s followed by a much lighter number, “Penny Lane,” performed by John Wetton. This is a pretty sweet rendition, and includes some nice percussion. It’s interesting to hear folks known for harder rock covering these songs.

Of course, for me the most interesting track is Jack Bruce’s version of “Eleanor Rigby.” I saw Jack Bruce perform once in the late 1980s, and he was fantastic. Known primarily for his work with Cream, here he gives a wonderfully sad and emotional performance of “Eleanor Rigby,” accompanied by strings. So effective is his performance that my girlfriend, listening to this CD with me, asked me if he committed suicide. Another of my favorite tracks is Andrew Gold’s rendition of “Norwegian Wood.” It’s fairly faithful to the original. This song was actually released previously on Andrew Gold’s Copy Cat.

Helen Reddy covers “All You Need Is Love” on this CD. It had been a while since I’d last listened to Helen Reddy, and I don’t think I would have recognized this track as being hers without the CD case. The style of “All You Need Is Love” is so different from what I know of her work, and she really captures the feel of the original. She does repeat “Love is all you need,” at the end, even whispering it at the very end, but drops the “She loves you, yeah, yeah, yeah” bit from her version. Judy Collins then follows with a pretty rendition of “I’ll Follow The Sun.”

One of the album’s surprises is Howard Jones’ nice cover of “And I Love Her.” His vocal performance is seriously good. Another surprise is KC’s version of “Let It Be.” Maybe I shouldn’t be surprised. I saw KC & The Sunshine Band in concert several years ago, and it was probably the best show I saw that year. So I know the guy is talented. But this rendition is so heartfelt and moving, quite a bit different from his most famous material. It’s followed by an excellent and equally moving version of “Yesterday” by David Clayton-Thomas.

Stephen Bishop dips into The Beatles’ earlier material with “All I’ve Got To Do,” here titled “All I Gotta Do.” This is a tune from the group’s second LP, With The Beatles, and Stephen does a really good acoustic rendition. It’s followed by Billy Sherwood’s version of “Something,” my personal favorite Beatles song. Billy Sherwood also produced this compilation, and his take on “Something” is wonderful. The CD then concludes with Leo Sayer’s version of “Hey Jude.” It's a good rendition, and I really love the harmonica.

CD Track List
Keep Calm And Salute The Beatles was released on April 28, 2015 on Purple Pyramid Records, a division of Cleopatra Records.
Posted by Michael Doherty at 1:47 PM