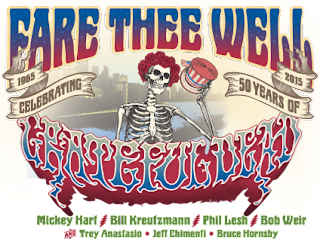 Thinking about these upcoming concerts by the surviving members of the Grateful Dead generally angers or saddens me, depending on what aspect I’m focusing on. These reunion shows are billed as their final shows, which is annoying enough. I hate when bands announce a final show. How do they know they won’t want to play together again? That aside, the money involved in attending any of these concerts is disgusting. But word was the shows would be broadcast online for those of us who didn’t want to spend sixty dollars just to park our cars. And yes, the shows will be broadcast online. But they won’t be free. If you want to watch the Santa Clara shows, you have to pay $19.95 per night, and if you want to watch the Chicago shows, you have to pay $29.95 per night. Now that might not sound like much, especially to the imbeciles who recently paid a hundred dollars to watch two people punch each other, but it’s the spirit of the thing that is the issue here. If it were any other band doing this, I wouldn’t care. U2? Fine, they sold out ages ago. Rolling Stones? Fine. But the Grateful Dead? This was a band that was somehow unlike any other. They meant something. You know? Why the fuck are the surviving members trying to take every penny possible here? There used to be live radio broadcasts of shows back in the day, and those were free. Free. But sadly this is not a return to those days. Nothing about this entire venture rings true. It seems the spirit of the band is dead, and the members have become greedy monsters out to destroy our memories and make a ton of money. It’s a shame. The Grateful Dead was the best live band I ever saw, and their shows were unlike those of any other band. That band ended twenty years ago with the death of Jerry Garcia. These shows will not be the final Grateful Dead concerts. The final Grateful Dead concert was performed on July 9, 1995.

By the way, in the email they sent out advertising the webcast, they wrote: “Each concert will be a uniquely different that you won't want to miss, with the July 5 concert event being the last time the band will play together.” First of all, they left out the noun. A uniquely different what? But, more importantly, the phrase “uniquely different” is completely retarded and redundant. If something is unique, it can’t help but be different from all others. “Unique” means there is only one of it. And lastly, every Grateful Dead concert was unique. That is not anything that needs to be mentioned. The band never did the same show twice. But of course this announcement isn’t aimed at the fans; it seems to be aimed at those people who know little or nothing about the band. And perhaps it is those people that this entire venture is for. And perhaps those are the people who will be able to enjoy it. Because, once again, this isn’t the Grateful Dead. This is something else, a shadow of the band. A greedy shadow.

Posted by Michael Doherty at 11:53 AM