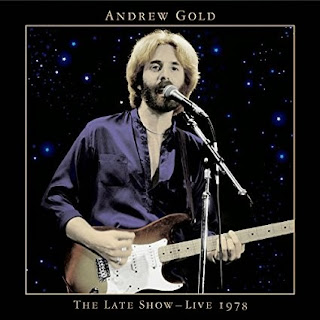 Andrew Gold is known for his 1970s hits “Lonely Boy” and “Thank You For Being A Friend,” as well as for his work with Linda Ronstadt, Art Garfunkel and many other artists. The Late Show – Live 1978 captures him at his best. It is a recording of the last show of his 1978 tour, on April 22nd at Roxy Theatre in West Hollywood. This was his home turf, and this recording finds him relaxed and having a good time. This CD from Omnivore Recordings marks the first release of this live material, and features liner notes by band member Brock Walsh, including thoughts on each of the songs.

This CD opens with “I’m A Gambler,” a tune from his first, self-titled album. This is kind of a light, fun song to get things off to a good start. Here is a taste of the lyrics: “Hey, you know I’d love to live the dream/Black tie tuxedo and a chauffeured limousine/Wining and dining all my friends/You know I’d pick up the check and win it back again.” After welcoming the crowd, he goes into “Hope You Feel Good,” a really good love song that Andrew Gold wrote with Stephen Ferguson. This was the first track from his second album, What’s Wrong With This Picture?

When introducing “Gambler,” a song written by Kenny Edwards, Andrew says, “We were in this band called The Rangers, from 1972.” Someone shouts out, and he responds, “Somebody actually knows The Rangers?” He adds, regarding the song, “It’s not on any album.” Well, now it is. It’s a good, lively song, with a nice instrumental section. “I ain’t no gambler, but baby, this ain’t no game.”

And it’s after that song that he gets into the material that should be more familiar to everyone. In introducing “Endless Flight,” Andrew jokes, “This is dedicated to all the horrible airline pilots that have flown us from here to New York.” And as soon as those first notes begin on the piano, the crowd cheers. “Endless Flight” is a wonderful song, and it’s so great to revisit it. You might also be familiar with Leo Sayer’s cover, which was the title track for his 1976 release. Someone in the crowd shouts out, “All right, Andrew!” And Andrew follows “Endless Flight” with “Thank You For Being A Friend,” another of his most famous songs, this one coming from his 1978 record All This And Heaven Too, released just before this concert. This song was also released as a single, and then years later used as the theme song for the television series The Golden Girls (though that was a cover version by Cynthia Fee). This is a sweet song, with lines like “And when we both get older/With walking canes and hair of gray/Have no fear even though it’s hard to hear/I will stand real close and shout/Thank you for being a friend.” (The original album version has the line as “I will stand real close and say.”)

Andrew Gold performs a couple more tracks from All This And Heaven Too: “Oh Urania (Take Me Away)” and “How Can This Be Love.” I’m particularly fond of “Oh Urania (Take Me Away),” with the opening lines “One hundred million billion/Stars up in the sky/Each one looks so beautiful/Reflected in your eyes/I wonder if there could be life up there.” “How Can This Be Love” was written by Mark Safan and Mark Goldenberg, and it was the opening track for All This And Heaven Too. After that tune, that guy yells out “All right, Andrew!” again, and Andrew responds: “Buy him a drink. In fact, drinks for the house.” Andrew then tells an interesting anecdote about the writing of “That’s Why I Love You.”

Of course he does “Lonely Boy,” his biggest hit, a song originally included on What’s Wrong With This Picture? This song always makes me smile. It reached #7 on the Billboard Hot 100. The original version features Linda Ronstadt on backing vocals. Here Andrew Gold ends the set with it. It’s a good closing number, but Andrew Gold isn’t quite done. When he comes back for the first encore, he jokes, “We didn’t have anything prepared, you know, so while we were standing right there in the stairway right over there, just waiting there, we wrote this song, and arranged it and everything.” He then does a cover of The Beatles’ “Doctor Robert.” The other encores are “Go Back Home Again” and a cover of Chuck Berry’s “Roll Over Beethoven.”