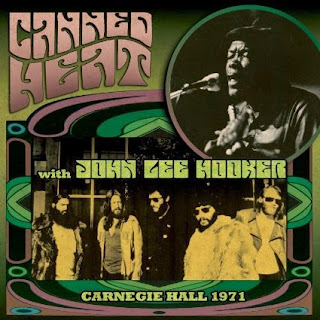 Canned Heat is best known for the hits “Going Up The Country” and “On The Road Again,” but this was mainly a blues rock band, and they put out an album with John Lee Hooker titled Hooker ‘N’ Heat in early 1971. The album was all John Lee Hooker material, and was the last studio album to feature Alan Wilson, who died of a drug overdose in late 1970 (a member of the 27 Club). In the spring of 1971, Canned Heat performed with John Lee Hooker at Carnegie Hall. Part of the show was recorded, and now you can hear it with the release of Carnegie Hall 1971.  This CD features liner notes by Dave Thompson, with portions of an interview with drummer Fito de a Parra.

This CD opens with “Framed,” which the band dedicates to Abbie Hoffman, who was in the audience that night. And this version contains lyrics related to Julius Hoffman, that total fuckhead of a judge who oversaw the trial of the Chicago Eight (where Abbie Hoffman was one of the defendants): “When Judge Julius Hoffman walks down, sticks a joint in one pocket, some reds in the other, turns around to the jury and says, ‘Convict that hippie, he’s an addict,’ what could I do?” There is also a nice jam. (By the way, in the liner notes Dave Thompson writes “Abby Hoffman,” not Abbie Hoffman, but I can only assume he didn’t mean the Canadian track and field athlete.) “Framed” was written by Jerry Leiber and Mike Stoller, and was originally recorded by The Robins, and later by Cheech And Chong.

They follow that with “Let’s Work Together,” a song which was a hit for the band in 1970. “Let’s Work Together” was written by Wilbert Harrison. At the end of that tune, they introduce John Lee Hooker, and things get much bluesier with “Hey Babe,” a song he wrote. I love that great, mean vibe. This track is one of the highlights of the CD, and it’s followed by the album’s monster track, a twenty-minute version of “Shake ‘N’ Boogie,” which has a whole lot of energy. “I feel good, I feel good, I feel good now/Higher, a bit little higher, a little bit higher, a little bit higher.” There’s a wild guitar solo, and approximately eight minutes in it seems the song is coming to a conclusion. But no. Instead, it is just getting going, entering into a great jam. Sure, it gets a bit messy at moments, but that’s all right. And it leads to a fairly long drum solo.

This CD also includes a rendition of Willie Dixon’s “Back Door Man,” which opens with some chaotic and expressive electric guitar and has an unbridled energy throughout. The album then concludes with “Tease Me Baby,” a tune written by John Lee Hooker and Bernard Besman.